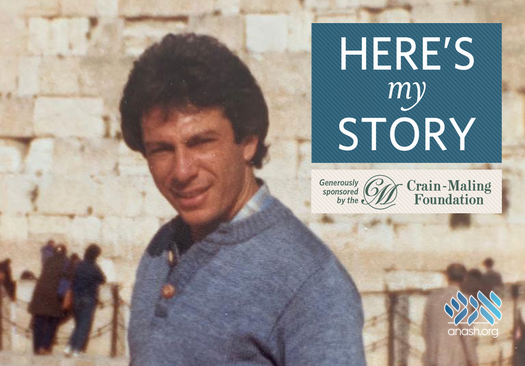 After finishing my tour in the Israeli army, which included service during the Yom Kippur War of 1973, I came to Los Angeles where I opened a clothing store in a prime garment-district location – on the corner of South Los Angeles Street and Pico Boulevard.

At a certain point, a Chinese clothing manufacturer came to see me to propose a partnership, and since it was a good deal, I agreed. After we signed the contract, he invited me out to a Chinese restaurant to celebrate, and although I was not Torah observant, I told him “please don’t serve me pork.” During this dinner, I made l’chaim with him on a liquor which tasted strange to me; I also ate some strange-tasting food, and afterwards, I got very sick. I remember vomiting and pleading with G-d, “Please … please … I’m sorry I ate that.” This incident bothered me very much but, after a while, I forgot about it.

Several months later, I was traveling to Israel and decided to make a stop in New York to get a blessing for marriage from the Rebbe. But when I arrived at 770, I discovered that it was not so easy to get an appointment. Nonetheless, Rabbi Binyomin Klein, the Rebbe’s secretary, agreed to convey a letter I had written.

Now, in my letter to the Rebbe, I had not mentioned the incident with the Chinese restaurant, so I was shocked to get a return call from Rabbi Klein saying that the Rebbe asked me to watch what I ate! He also invited me to come to 770 to pick up three dollars which I was to donate to charity on arrival in Israel.

I understood the Rebbe’s message to me. I was fortunate enough to grasp the seriousness of the events that took place, and to begin making changes in my life. This was really a turning point in my life, when I started becoming more Torah observant.

As I advanced on my path, I decided to stop working on Shabbat, which meant I would have to close my store on Saturdays.

This was very difficult for me, because on Saturdays the store was busiest. While during the rest of the week I might sell a few hundred dollars’ worth of clothes, on Saturday I was guaranteed to sell anywhere between 5,000 to 15,000 dollars’ worth. In other words, Saturday generated ninety percent of my income.

Furthermore, if I reduced my income by that much, how would I be able to pay the rent on the store? I had a twenty-year lease, which was ironclad. The owner had warned me from the very beginning: “Don’t even think about breaking this lease. If you try, I will chase you for the rest of your life.”

Initially, I tried to find somebody to take over the lease, but I had no success. I didn’t know what to do next – the only thing I was certain of was that I had to close the store on Saturdays. So I wrote to the Rebbe: “I don’t want to work on Shabbat, so I decided to close my store, and I would like a blessing that this decision not hurt me.”

A few days later I had the Rebbe’s response. He wrote that it was a great merit for me to begin keeping Shabbat, and he reminded me to be sure to start Shabbat on time, before sunset. He also told me to joyously spread Torah to others (he underlined the word “joyously”), and to give charity. Toward my charitable giving, the Rebbe contributed eighteen dollars – a bill of ten, a bill of five, a bill of two, and a bill of one.

Thus encouraged, I decided the next day to go to the landlord and tell him, no matter his reaction, “I’m a Jew and I need to close the store – here is the lease back.” But the landlord was not there.

No sooner had I returned to my store than a man walked in, who – to my utter surprise – announced, “I want to buy this place.”

“I already spoke to the landlord,” he responded, “and he is ready to sell, but he said that you hold the lease. This is why I am here – to buy you out.”

I agreed, and the check he wrote was for a very nice amount. With it I bought a house and had enough money left to go into clothes manufacturing.

Afterwards, I visited the Rebbe when he was giving out dollars on Sunday, and I told him that a miracle had happened. Although the Rebbe was dismissive of that, I really felt this was true – that my relationship with the Rebbe brought about a chain of miracles, one after another.

Initially, I had wanted to call my company after myself, “Ami Sportswear,” but then I realized that a chasid is not supposed to flaunt his ego, so I got the idea of calling my company “Shmatteh,” which means “Rag” in Yiddish. I thought this was a clever name, but when I wrote about it to the Rebbe, he responded that one should not refer to clothes in a demeaning way. He cited the Talmud, which calls clothes mechadbdusa (literally, “my honor”), noting that this is especially true when the clothes are made in accordance with the laws of shatnez, which prohibit mixing wool and linen. I was initially puzzled by this answer, but when I asked Rabbi Leibel Groner, the Rebbe’s secretary, he explained: “The Rebbe wants you to turn rags into clothes, not clothes into rags.”

That’s when I thought of the eighteen dollars that the Rebbe sent me when I first wanted to close my store – and all the miraculous things that happened since then – and I decided, instead, to call my company “18th Street.”

Eighteen is the numerical value of the Hebrew word chai, which means “life.” The meaning of that word was brought home to me by Rabbi Groner, who said: “Don’t you see? The Rebbe will help you bring life to everything that you are doing.” And that has certainly proved to be absolutely true.

Mr. Ami Pykovski, a real estate investor, lives in Jerusalem. He was interviewed in April of 2015.