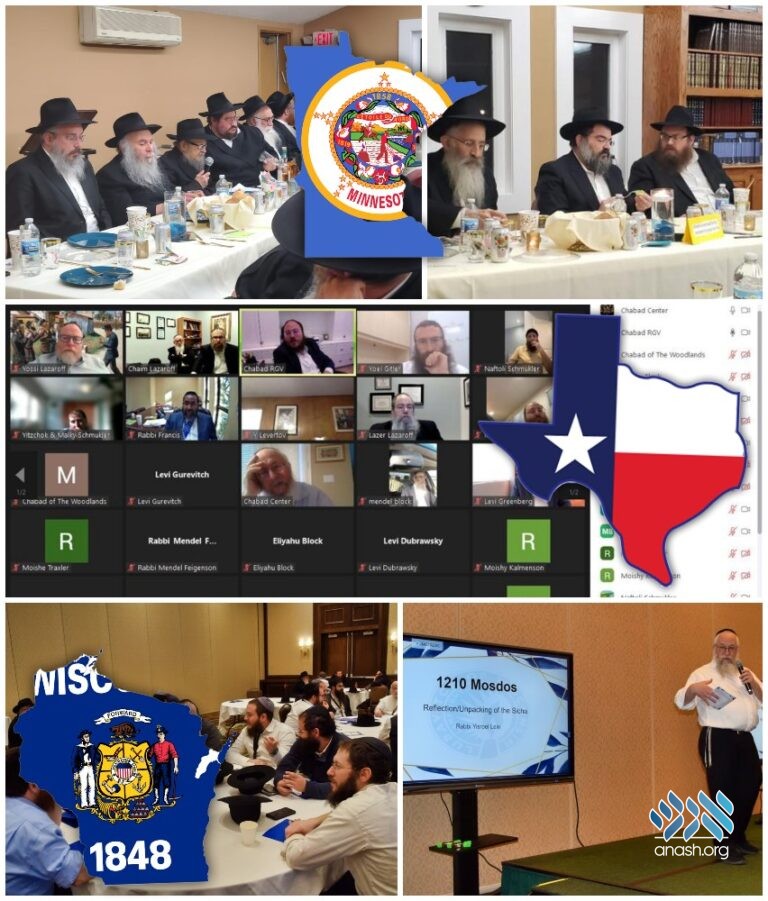 As the collective excitement for the Rebbe’s 120th birthday grows, so do the concrete efforts to mark the day in a meaningful way. For Shluchim, a particularly special gift to the Rebbe is establishing a new mosad, be it a Chabad House, mikvah, library, or other institution. To that end, Shluchim in Texas held a meeting dedicated to this goal, while at the annual Minnesota and Wisconsin Kinusei Hashluchim, discussions revolved around how to actualize this ideal. The meetings led to another 80 new mosdos pledged, part of the 800 mosdos that have been pledged around the world.

“This was a unique opportunity for Texas Shluchim,” noted Rabbi Chaim Lazaroff. “It’s the first time Shluchim from across the state are gathering to discuss how best to expand the Rebbe’s Shlichus in all of Texas.”

In Wisconsin, the first session of the regional Kinus opened with a presentation by Milwaukee Shliach Rabbi Yisroel Lein on the Sicha on Yud Aleph Nissan 5732—where the Rebbe discussed new mosdos—followed by Shluchim and Shluchos separately gathering in smaller groups to discuss how to implement these ambitious objectives.

A booklet was distributed in honor of these gatherings, providing a detailed overview of the building campaign of 5732, as well as the criteria a new mosad must meet.

As part of the overall goal to establish new mosdos, sending Shluchim to new cities and towns will be made a priority. In fact, the Minnesota Shluchim already welcomed two new couples to their ranks: Rabbi Nissan and Chaya Mushka Naparstek, who established Chabad of Maple Grove in Plymouth, Minn., and Rabbi Tzemach Dovid and Chaya Mushka Feller, who established Chabad of Macalester-Groveland in S. Paul, Minn.

“This is just the beginning of a worldwide push for new mosdos,” says Rabbi Mendel Feller of Twin Cities, Minn. “Together, may we welcome the ultimate new mosad—the third Bais Hamikdash.”