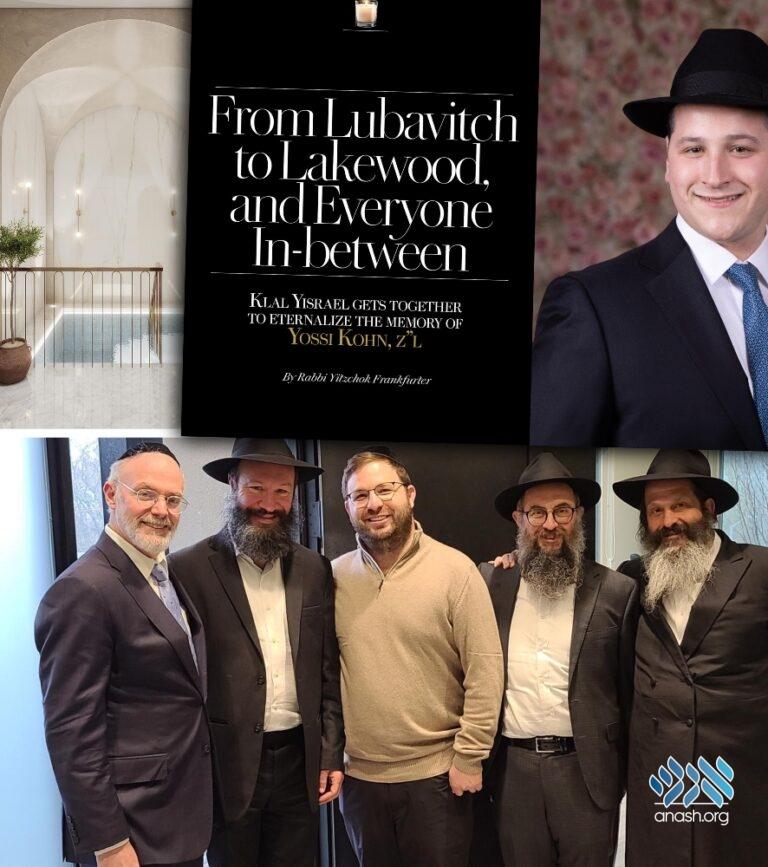 This week’s Ami Magazine featured the incredible story how a group of Yidden from Lakewood are partnering with two shluchim build mikvaos, with the help of donors including Satmar chassidim.

This past Sunday night I received a WhatsApp voice note from a phone number I didn’t recognize: “Hi, Rabbi Frankfurter, this is Mendel Lifshitz, Chabad shliach in Boise, Idaho. I’m reaching out to you at the behest of our dear chaverim from Lakewood who are part of our vaad, and a group of Yidden who have come together for a very fascinating project that we wanted to bring to your attention and see if you could run it in this week’s Ami Magazine. It’s a long story, and there are lots of different pieces to the puzzle. I would love to speak with you about this.

“B’kitzur, Rabbi Sholom Mordechai Rubashkin, Rabbi Pinny Lipschutz and Rabbi Aaron Kotler walked into the home of Mr. Ben Philipson with two Chabad shluchim, one from Idaho and the other from Wyoming—the two places in the US that are the most remote from a mikvah; it’s about ten hours roundtrip to the nearest one. We’re trying to build mikvaos, which we will do very soon, b’ezras Hashem.

“Essentially, a unique group of Yidden got together to do something on behalf of klal Yisrael, and this turned into a project that is being done in memory of the neshamah of Yossi Kohn, one of the Yidden who were unfortunately taken from us last year on Lag BaOmer. The Kohn family is now involved, and this has become a fascinating journey and a project belonging to klal Yisrael. I would love to speak to you about this.”

I was deeply moved and immediately hooked. And who wouldn’t be? What follows are my conversations with Rabbi Mendel Lifshitz, Mrs. Chaya Gitty Kohn—Yossi’s mother—and Rabbi Aaron Kotler, president emeritus at Beth Medrash Govoha.

How long have you been in Boise, Idaho?

We have been living here for the past 18 years. My colleague, Rabbi Zalman Mendelsohn is the shliach to Jackson Hole, Wyoming. Although we’re six hours apart by car, we’re kind of next-door neighbors—that’s how it works out here in the Wild West. Our nearest neighboring shliach or any kind of frum institution is Salt Lake City, Utah, which is five hours away and is home to the nearest mikvah. In the Western United States, the only two states without a mikvah are Idaho and Wyoming, so Rabbi Mendelsohn and I decided to join forces and tackle this together to ensure that we have kedushah and taharah in our communities.

I remember speaking with Rabbi Krinsky some years ago, and he told me that for the Rebbe one of the requirements for starting a Chabad community was that there had to be a mikvah.

It was definitely a priority, which is why it’s particularly important that we build these mikvaos. We are very touched by the coming together of klal Yisrael to do this, and specifically that it’s being done in memory of Yossi Kohn, who passed away tragically last year on Lag BaOmer, which is also something that is part of klal Yisrael. There was a lot of visible yad Hashem in this whole process with the way Rabbi Kotler, Rabbi Rubashkin, Mr. Philipson and the Kohn family got involved. Incidentally, when Rabbi Mendelsohn and I traveled to be menachem aveil the Philipson family after Mrs. Philipson passed away, we told the children and Reb Binyamin how this is such a tragic loss, and that to us it’s very personal because we feel like we lost a partner—she was heavily invested in this project and extremely active in galvanizing support. When we said that, her children replied, “You lost one, but you gained three,” and her three children have all become a huge part of the project.

What really caught my attention was the fact that people from various parts of klal Yisrael have joined together to make this project happen, which I find very inspirational. It isn’t just that you’re building two mikvaos, but they’re being built by acheinu bnei Yisrael throughout the world.

Absolutely It has been remarkable. Even the people who have been involved and have been pushing for this are surprised by how far the reach of this campaign has been and how everyone has come together. Now that, b’hashgacha protis, this is being done for someone who passed away in Meron, which touched all of klal Yisrael, it feels very appropriate that he is being memorialized through the efforts of klal Yisroel to help these two remote cities.

I understand that not only will this be helping the local communities, but Jackson Hole is also an area that attracts many frum tourists.

That’s correct. In fact, one of the main movers and shakers behind this campaign is Reb Yoel Philip, who is a Viener chossid who lives in Monsey. His connection is that he simply went to Jackson for a Shabbos and decided that he wanted to help. The need becomes very real for the visitors. A mikvah is very important to the infrastructure of a frum kehillah.

Especially if you’re trying to be mekarev people.

Exactly. People ask if we have a daily minyan here in Boise, and I answer that we only have a minyan on Shabbos. But the truth is that we do have a minyan of ba’alei teshuvah who daven every day they just don’t live in Boise anymore, because once they become frum it’s really difficult for them to stay. How can you stay in a place that doesn’t have a mikvah? There are many people who started their journeys to Yiddishkeit here, but now they live in Yerushalayim, Pittsburgh, Chicago or any number of places.

Nowadays it’s possible to build a structurally makeshift mikvah for a relatively small amount of money. Why don’t your two cities at least have those types of mikvaos?.

To be frank, these mikvaos aren’t being built for our families; our families can continue the way they have until now. But if we want to build mikvaos that will be able to serve the communities, they have to be on a high enough level that will encourage those who are not yet frum to begin bringing kedusha and taharah into their lives. That’s why they have to be built l’sheim ulisiferes, and it is my understanding that this was a horah of the Lubavitcher Rebbe—that mikvaos must be physically beautiful to encourage people to use them.

You mentioned in your voice note that when you first met Mr. Philipson, it was with representatives of various communities. Tell me about that.

Rabbi Mendelsohn and I were accompanied by Rabbi Aaron Kotler, Rabbi Sholom Mordechai Rubashkin and Rabbi Pinny Lipschutz. When we walked in, Mr. Philipson said, “I don’t understand. Is it that the misnagdim are no longer misnagdim, the chassidim are no longer chassidim, or is it Moshiach’s tzeiten? Obviously it’s Moshiach’s tzeiten, it’s very beautiful to see,” and he immediately pledged his support. He said, “I can’t say no to this. This is klal Yisroel right in front of my eyes, and everyone coming together.” Baruch Hashem, that’s what it has been. There are Lubavitchers, Satmar chasidim, donors from Lakewood and Monsey, and really from all walks of Jewish life. It has been an inspiration to us.

When you’re on shlichus in a remote comer of the country, you do get chizzuk from the visitors, but usually those are the people whom you touch directly But when you have klal Yisroel come together from a distance and lend their support in such a way; and especially when it’s done l’zecher nishmas a bochur who wasn’t able to build his own family and now we’re going to be able to have kedusha and taharah in so many families because of this, it really gives us a lot of chizzuk. We’re very grateful to all those who have stepped forward to recognize that klal Yisroel is really united.

B’ezras Hashem, we‘ll finish building these mikvaos, and people will take the opportunity to use them. Our biggest hope is thatonce we build them they turn out to not be big enough.

Absolutely. Our communities have been flabbergasted by the support shown by klal Yisroel. Traveling ten hours doesn’t just involve the travel time, because it also means hiring a babysitter, spending resources to travel, and sometimes getting stuck overnight. It’s something that is desperately needed, and we’re very touched that the Kohn family stepped up to take on this project.

See below for the full article.

Click here to take part in the campaign, and memorialize a victim of the Meron tragedy.