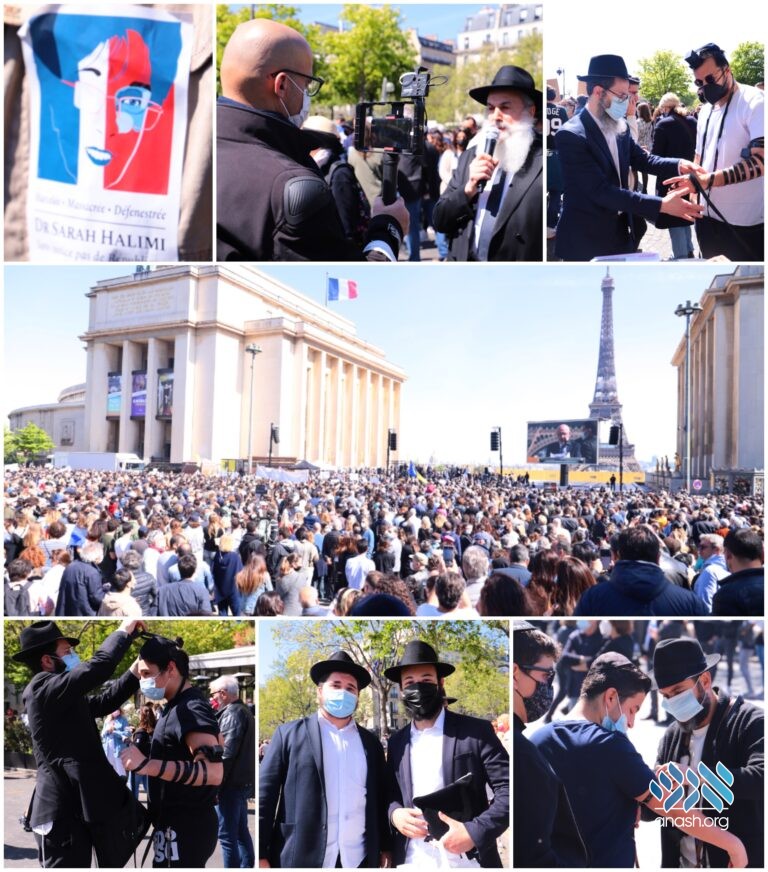 Thousands of Parisians gathered at the foot of the Eiffel Tower to protest the acquittal of the murderer of Sara Halimi, a French Jewish women. Lubavitchers were on the scene with tefillin and Shabbos candles.

Thousands of Parisians gathered at the foot of the Eiffel Tower on Sunday to protest the acquittal of the murderer of Sara Halimi, a French Jewish women.

Mrs. Halimi, who was the only Jewish resident in her building, was murdered in 2017 by a man who was screaming “Allahu akbar”. Nevertheless, the French Government refused to call the killing an anti-Semitic incident for many months.

In July 2019, a judge ruled that the murderer was likely not criminally responsible because his heavy cannabis use had put him in a state of temporary psychosis. Despite the families appeal, the ruling  was upheld at the end of 2019 by the Paris Court of Appeal and in 2021 by the Court of Cassation, which is the final court of appeal in France.

Following the shocking ruling, protests were held in New York, London, Yerushalayim, and other locations across the globe. In Paris, a mass protest was held on Sunday, attended by over 20,000 who strongly protesting the verdict.

A large number of Lubavitchers from Paris also attended the protests, and utilized the opportunity for mivtzoim as well. Hundreds of attendees put on tefillin, and many women received a packet of candles for Shabbos that were specially dedicated to Sara Halimi.