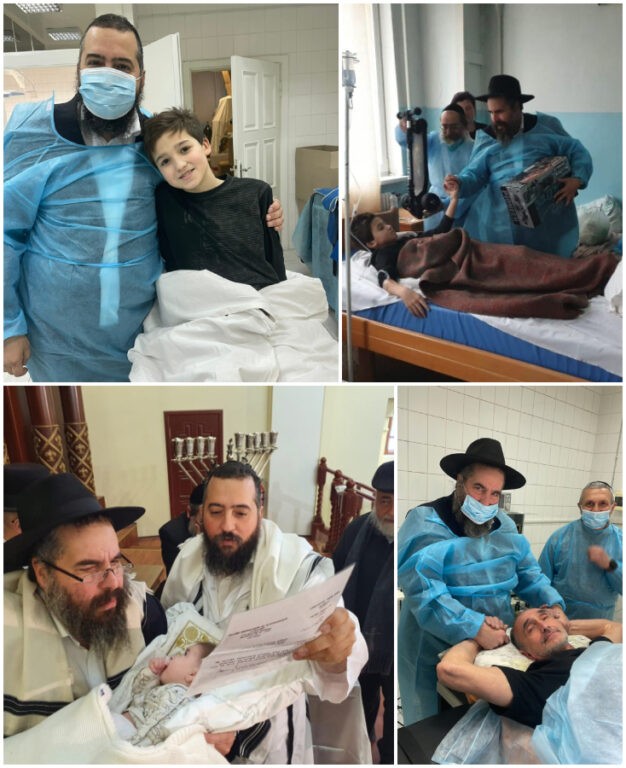 Four brissim took place in Ukraine today on boys and men of varied ages. Mohelim from Mariupol and Eretz Yisroel traveled to Kharkov for the occasion.

Today, in Kharkov, Ukraine Rabbi Moshe Moskovitz, the shliach to the city arranged for mohelim Rabbi Mendel Cohen the shliach from Mariupol, and Rabbi Gelber, from Eretz Yisroel to come all the way to Kharkov to perform the brissim.

The first bris immediately followed after Shachris was for a baby named Menachem Mendel his mother decided to name him after the Rebbe. Menachem Mendel was 6 months old at the time of his bris since he was born during the war and was unable to have a bris before that.

Following him was his 4-year-old brother, Amir. Following Amir, 9-year-old Avraham, a student of the Jewish Day School in Kharkov had his bris.

The last bris, of a man named Alexander, occurred after being inspired by a farbrengen at the shluchim’s home. Every Shabbos after davening everyone comes to the Moskovitz’s home to farbreng. During the farbrengen, Rabbi Moskovitz told everyone that on Monday two mohelim were coming to the city. Despite his age, Alexander decided that he too wanted to have a bris after the shocking admission, everyone in the room started to dance.

And on Monday, Alexander also was there ready to do this tremendous mitzvah with true mesiras nefesh symbolizing the eternity of Am Yisrael. The whole community was very emotional with the hope that in their merit, the Geulah will finally come!

You can see a video compilation of all of the brissim here.