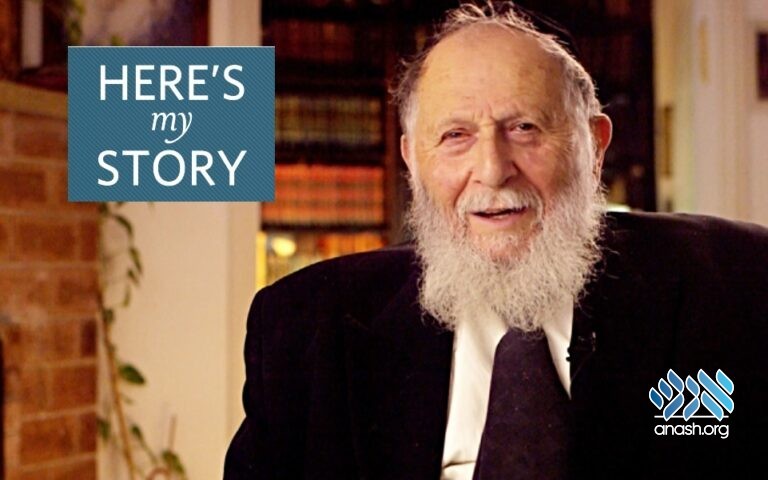 After becoming rabbi in a very socialist-minded city, Rabbi Dovid Shraga Katz asked the Rebbe what should do to make sure that he won’t be brought down as a result of my work with the community. The Rebbe’s offered a simple suggestion.

Rabbi Dovid Shraga Katz served as a community leader in Haifa since 1960 and led the yeshivah Mishkan Yaakov, which he founded, for over fifty years. He was interviewed in January of 2014 and passed away in December of 2021.

When my parents emigrated to the Land of Israel and settled in Haifa, I was two years old. In the 1940s, I attended the Chofetz Chaim yeshivah in Kfar Saba, which was headed by Rabbi Aharon Yehuda Leib Shteinman and later spent eleven years studying in the Ponevezh yeshivah in Bnei Brak.

Although educated in the premier Lithuanian yeshivot, I was young, wanted to be open, and was interested in Chasidut. A few of my friends in Ponevezh were from Chabad families, and from time to time I would attend gatherings held by a Chabad chasid who lived nearby. I especially remember a farbrengen led by Rabbi Refoel “Foleh” Kahn who had returned from a visit to the Rebbe’s court, and related his experience to us Ponovezher students.

At the age of twenty-eight, while still unmarried, I was offered a rabbinic post in the Ramat Remez neighborhood of Haifa. My teacher Rabbi Yosef Shlomo Kahaneman, the esteemed head of the Ponevezh yeshivah, told me to accept the position on the condition that I open a yeshivah in the neighborhood and lecture there every day.

Members of the local community were enthusiastic about the idea and even pledged their support. In addition, then-mayor of Haifa, Mr. Abba Chushi, agreed to designate a suitable plot of land for a building, and even gave us a grant of half a million liras. To complete the construction, however, we would need several million more.

In the late 1960s, I decided to travel to the United States to raise funds from Jewish philanthropists there. At one point in my tour, someone put me in touch with the Rebbe’s secretary, Rabbi Leibel Groner, who arranged an audience for me with the Rebbe.

The appointment was set for late at night, and I arrived at 2:00 AM. The line of people waiting to go into the Rebbe’s room was a diverse bunch. There was a Jew from South Africa who came straight from the airport and was only going to see his son and daughter after his audience, a young modern-looking couple who were both actors, and a yeshivah student pacing back and forth nervously.

Before it was my turn, Rabbi Groner asked me to keep it brief, since they wanted to make sure the Rebbe would have some rest that night. “Once the buzzer is sounded,” he told me, “don’t linger around.” He also made it clear that the custom was to stand in the Rebbe’s presence.

I remember being very impressed with the Rebbe’s appearance; his face remains engraved in my memory until this day. At first I stood, as I had been advised, but the Rebbe immediately invited me to sit. I resisted, but when he repeated himself, I relented.

After hearing about the yeshivah, the Rebbe had a battery of questions for me: “What are you teaching? What kind of students do you have? How are you educating them? What do you hope to achieve with them?” My feeling was that he was genuinely interested in listening to my responses. He wasn’t just trying to get on to the next visitor; he was completely with me.

One of the issues I raised was the question of fundraising. I was entirely inexperienced in this field, and had quickly learned that it was no simple matter. But, an idea occurred to me: Since Haifa was considered a “red” city, meaning that it identified with the cause of socialism and labor unions, I thought that we might be able to turn to like-minded Jews in the US for their support.

“The mayor of Haifa is helping us, and you can too!” I told one person I had been introduced to.

“I have an idea,” he said. “There is a Jew in Philadelphia who would be willing to donate $100,000 to your cause.” To receive the money, however, I would have to get the approval of Yehoshua Levin, the treasurer of the Histadrut, Israel’s union federation.

I contacted Rabbi Kalman Kahana and Avraham Verdiger of Poalei Agudat Yisrael, the religious workers’ party, and asked them to speak with Yehoshua Levin. After a short while, they came back with his reply: Yes, but I had to set aside forty percent of the donation for the Histadrut.

Now I had a problem: Should I accept such a condition? I decided to ask the Rebbe.

The Rebbe was unfazed by the forty percent commission that the Histadrut wanted for itself. “That’s cheap!” he exclaimed. “You should know that of every dollar the United Jewish Appeal raises for Israel, sixty-six cents stay in America.”

As it happened, Moshe Dayan had arrived in New York that very day to sell Israel Bonds. “What do you think?” the Rebbe asked rhetorically. “He’s doing it for free?” I was surprised to hear this, but realized how informed the Rebbe was in these matters.

Another question I put to the Rebbe was about promoting Torah study and religious observance within my community. In order for a rabbi to make a difference, he must either adapt himself to the level of the people around him, or he can try to lift them up to where he is. It is much easier to engage the people where they are, instead of raising the standards of an entire community, but this also carries a risk: It may lead to a deterioration of the rabbi’s own standards.

So I asked the Rebbe, “What can I do to make sure that I won’t be brought down as a result of my work with the community?”

The Rebbe’s answer was brief, practical and right on target: “My advice is that you deliver an in-depth class on Talmud to the members of your community.”

“But I already deliver an in-depth lecture every morning in the yeshivah,” I protested.

“There are students who stimulate their teacher, and there are students who exhaust him. Among lay members of a community, you will find that there is always someone who thinks he is smarter than the rabbi. For this reason, the rabbi has to put extra effort into preparing his lecture.” The class would therefore let me engage with the community, while continuing to challenge myself.

Interestingly, that was exactly how it turned out. There was a person who used to give a class before I arrived and then, once I started, he always tried to demonstrate his Talmudic proficiency to me. This forced me to dedicate an entire day to Torah study each week, to thoroughly prepare for this lecture.

About twenty minutes into our meeting, I heard a buzzer sound and I wanted to get up, but the Rebbe told me to stay. Twenty minutes later, when the buzzer went off again and the Rebbe waved it away, I told him, “I promised I would go!” I was worried that if I didn’t leave I wouldn’t be allowed to come back, but in hindsight, I regret it, as I never did manage to return.

The memory of my meeting with the Rebbe still lives with me, and it left an indelible imprint on me. I never became a “Chabadnik” but that audience was deeply meaningful. In my youth, I heard all the talk about the new, young Rebbe who had taken over the leadership of Lubavitch. Looking back, when one takes in the Rebbe’s communal work over the years, and how he successfully transformed Chabad into a global force, I have no doubt that this was something only the Lubavitcher Rebbe could accomplish.