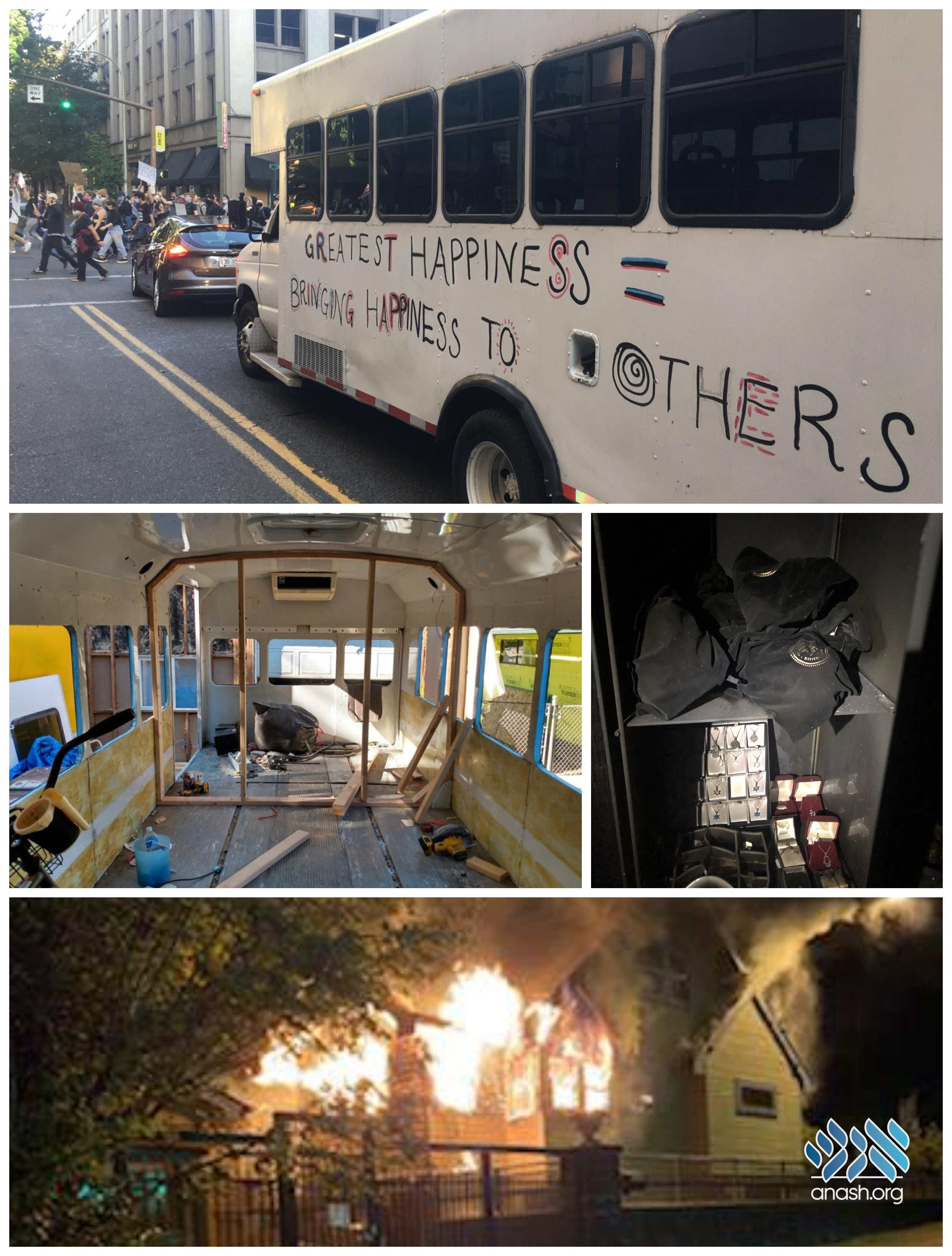 After two devastating fires destroyed the Portland Chabad House and its Judaica store, Rabbi Chayim and Simi Mishulovin are constructing a Chabad House on wheels to bring Yiddishkeit – and kosher delights – to the city.

What should shluchim do when fires destroy their Chabad House and riots plague their city as it attempts to emerge from a pandemic-induced coma?

When Rabbi Chayim and Simi Mishulovin first moved to Portland, Oregon, the question was – how to create an impact in one of the most irreligious states in the USA?

While plenty of shuls were to be found in the city, regular shul-goers were hard to come by. The shluchim thus set out to create a welcoming drop-in center with a lounge, library and store, appealing to the laid back, non-structured attitude of Portlanders.

The center, and especially the Judaica store, called Everything Jewish, proved to be a major pull for miles around, and a place where thousands of mitzvos were performed. “We had so many people putting on tefillin here,” Rabbi Mishulovin told Anash.org. “Karkaftas left and right, mezuzos flying out the door! The amount of mivtzoim done here has been tremendous.”

It all came to an abrupt halt when two fires broke out at the Chabad House last week, destroying almost $100,000 worth of divrei kedusha.

But people have still been calling. Not a day had gone by since the blaze without at least one person looking for some religious item, says Rabbi Mishulovin, be it a Chumash, a mezuza or a pair of tefillin. Clearly, they are unaware of what happened at the Chabad House, and yet their needs must still be met.

While plans to rebuild the Chabad House are underway, the efforts will require a vast amount of time and resources, and the insurance companies have yet to pay out. In the meantime, the Mishulovins are embarking on a different sort of venture to bring Yiddishkeit to the city that needs it immediately.

Portland is famous for its many top-notch food carts, and so the shluchim have purchased a truck and are presently turning it into a mobile Chabad House with a kosher kitchen/restaurant in the rear.

The truck will make its rounds through the city, bringing Torah and mitzvos to people anywhere and everywhere. Especially now, when Portland is suffering from riots and hate, the shluchim plan to bring to the streets the love, warmth and acceptance their Chabad House has been known for. Due to the pandemic, residents are going out even less, and the need for Yiddishkeit to come to them is even greater.

People would drive from all over to come to the center, Rabbi Mishulovin says, not just to buy a needed item but simply to connect to Yiddishkeit. One woman travels for two hours just to connect to the mosad and the shluchim! Over the years, countless people have become warm to Torah, open to its hashkafa, and in many cases, have changed their entire lives around, as a result of the Chabad House.

It is those feelings of connection and Ahavas Yisroel that the shluchim plan to bring into the mitzvah tank. “We’re going to bring some more love and kedusha to the streets!” They announce.

Click here to help Everything Jewish build their new center and recover from the fire.