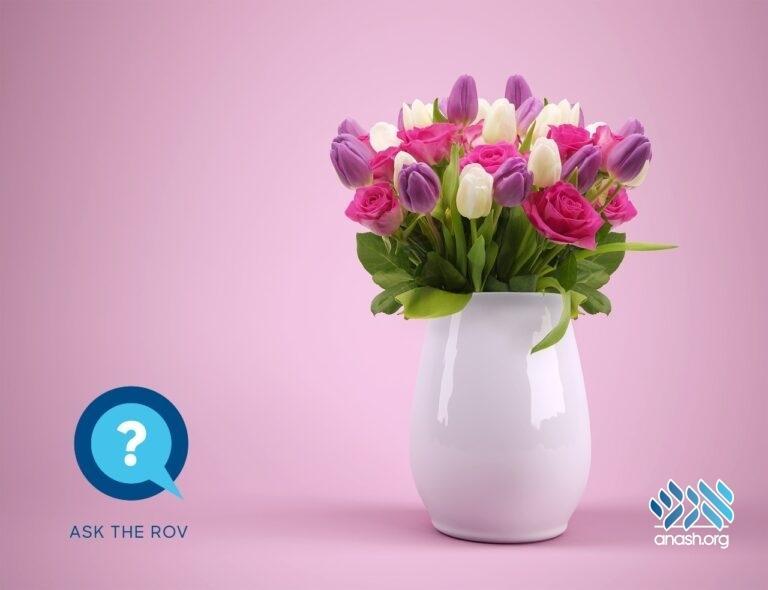 Ask the Rov: Is it our practice to place trees and flowers in shul on Shavuos?

The Maharil records a custom to spread greenery and flowers in shul for the joyous celebration of Shavuos. The Terumas Hadeshen would sprinkle his home with greenery and pleasant-smelling herbs. The Rama — quoted in the Alter Rebbe as well — combines both and writes, “For Shavuos, it is customary to spread greenery in the shul and at home, to commemorate the joy of Matan Torah.”1

Poskim explain that we commemorate the greenery that was on Har Sinai at the time of Matan Torah.2 Others note that the aromatic flowers are reminiscent of the special fragrance that filled the world during the giving of the Torah, or to signify how the Jewish people were like a “rose among the thorns” when they accepted the Torah.3

A related custom is recorded by the Magen Avraham and Alter Rebbe: trees are placed in shuls and homes to remind us that on Shavuos we are judged concerning fruit of the tree and we should therefore specifically daven for them on Shavuos.4

The Vilna Gaon famously opposed this custom, arguing that since non-Jews began to celebrate their holidays with trees, it is forbidden to act similarly due to chukos hagoyim.5

Some poskim are opposed to placing trees in shul for a different reason. The Torah warns against planting a tree near the mizbe’ach, and the Rambam holds that it applies anywhere in the Beis Hamikdash.6 Some poskim extend this prohibition to a shul, which is compared to a Beis Hamikdash. However, most poskim aren’t concerned since not all halachos of a Beis Hamikdash apply to a shul. Moreover, the prohibition is only for tall, shady trees since that is what the idolaters would plant so that people should gather by their idols.7

Many later poskim countered that if we practice a custom with a good reason, we need not be concerned if the goyim do it as well. Additionally, our customs are not the same, as the goyim place the trees outdoors as well, while we only place them indoors.8

The Rebbe related that in the Chabad shul of Nikolayev where he grew up, they followed this custom of decorating the shul with greenery in honor of Shavuos.9 Yet, although this custom is mentioned in Luach Kolel Chabad, it is not practiced in most Chabad shuls. Many however maintain the practice to bring flowers and greenery into their home for Shavuos.