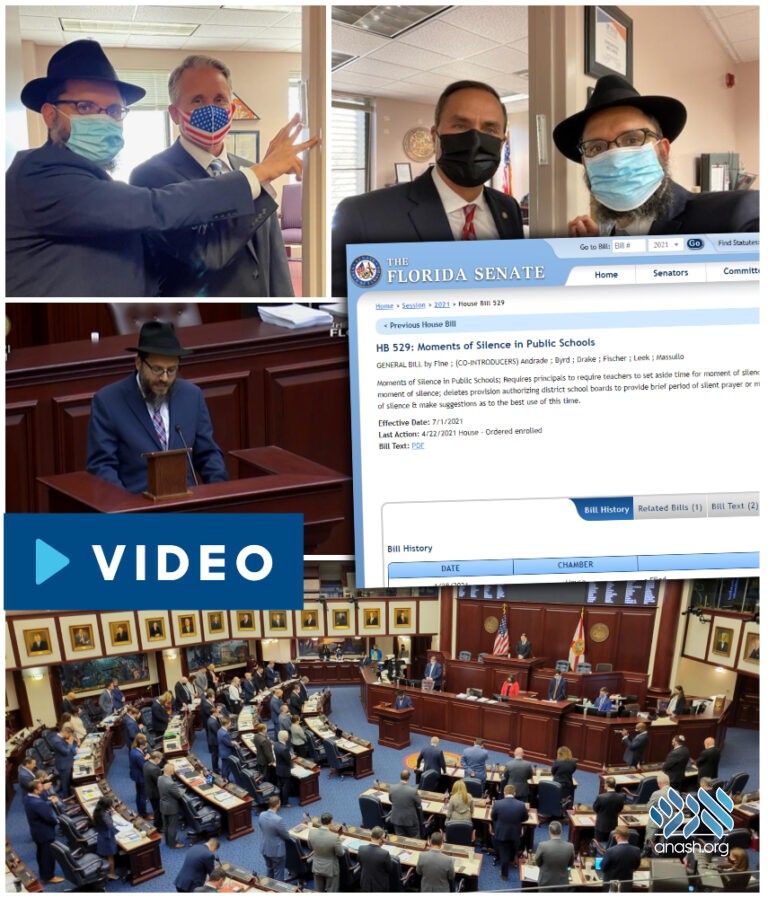 A law requiring Florida students to begin their school day with a moment of silence, a cause which the Rebbe strongly pushed for, passed the Florida Senate and House, and is expected to be signed by Governor Ron DeSantis.

A law requiring Florida students to begin their school day with a moment of silence passed the Florida Senate and House, and is expected to be signed by Governor Ron DeSantis.

On Thursday, the Florida Senate voted 32-6 to pass the bill (HB 529), which was approved by the House last month in a 94-24 vote. The day’s Senate session also began with a prayer by a local shliach, where he stressed on concepts of Moshiach and the upcoming redemption.

Under the measure, school principals would be required to direct first-period teachers to institute a one- to two-minute moment of silence at the beginning of each day.

Lawmakers have considered similar proposals in previous years but have not passed them.

The Rebbe began campaigning for a national Moment of Silence in 5743, stressing that education is not merely the transmission of knowledge, but is really the teachings of morals.

Since then, a “Moment of Silence” has been mandated for public schools in 12 states and encouraged (but not required) in another 25. Florida brings that number up to 13.

The passing of the bill was the result of years of effort by a group of Florida shluchim, including Rabbi Yosef Junik, Rabbi Yossi Denburg, Rabbi Schneur Z. Oirechman and Rabbi Yossi Hecht. They were helped by Rabbi Avrohom Frank, who has advocated for a Moment of Silence across the nation for decades.