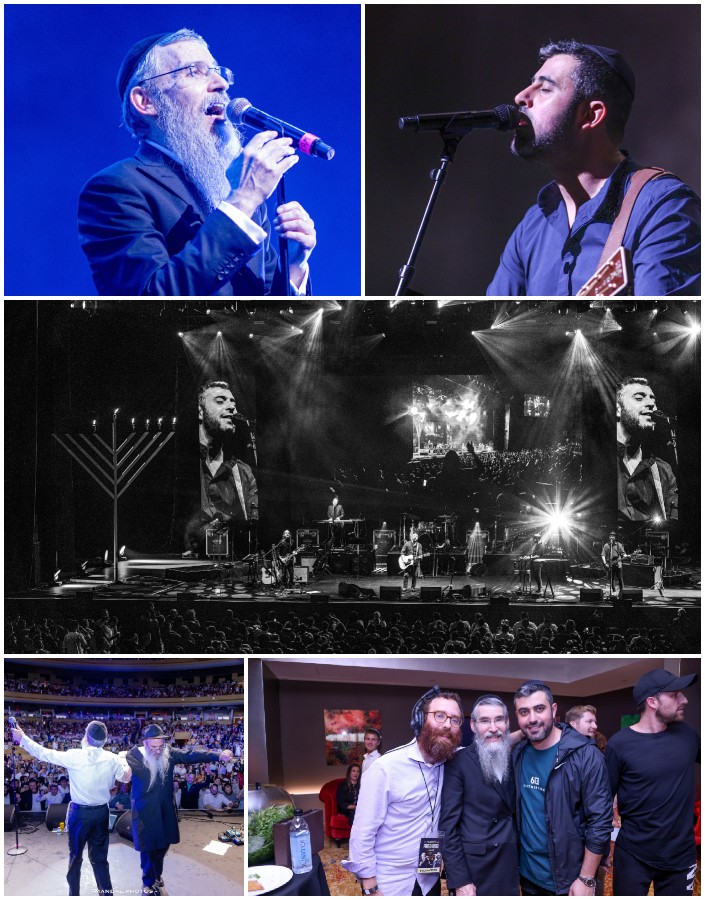 Chabad of South Broward celebrated its 43rd Annual South Florida Chassidic Chanukah Festival Thursday, Dec 22nd with a concert at the Glamorous Venue, Hard Rock Live Casino, and Hotel in Hollywood. Surprisingly this was only 2 years after the quarantined-style drive-in concert at the Big Easy parking lot in Hallandale.

Modi Rosenfeld, a popular Jewish comedian, has called Florida “a year-round Pesach program.”  Thousands of Jews flooded Hard Rock Live. Shluchim brought groups from their Chabad Houses, Chai Lifeline had hundreds of guests at the Festival, and thousands of educators, professionals, and businessmen, including people driving from as far as Atlanta and flying in from London, England, witnessed this incredible performance.

2,500 children received Chanukah Gelt and the Moshiach Times and a staggering 1,500 Chanukah Menorahs and candles were distributed!  Walking through the “Guitar Hotel”, which is seen from commercial jets before landing in South Florida, amid curious glances, Jews from all walks of life gathered for this special Chanukah Festival as it is a Hakhel year when large gatherings are especially encouraged, as were in the time of the Holy Temple in Jerusalem.

The seamless event, produced by Dovid Weinbaum of DW Productions, began with children saying the 12 Pesukim, a miracle story and a heartfelt cry for Ad Mosai.  Contemporary artist Ishay Ribo had the sold-out venue on its feet with flashlights on, as he lit the room with heart-felt music.

Avraham Fried exuberantly jumped on stage and sang iconic classic Jewish music. Bochurim danced on the sides to Niggunim. The energy in the room was palpable. Ishay Ribo and Avraham Fried performed jointly for an unexpected yet effortless duo.

Three massive screens ensured everyone could see the incredible backgrounds and multiple angles of the singers. The precision to detail took this yearly event from amazing to awe-inspiring. In an especially inspiring movement during the concert, the entire room went dark, and all that was seen was the flickering lights of the Menorah.

There was a quality in the air that sparked. The reason lighting candles was chosen to commemorate the miracle of Chanukah, was that fire is the most spiritual component in our world. It doesn’t take up any physical space and is constantly reaching upwards. Chanukah was most importantly a spiritual victory, which is why this musical and magical event was the appropriate way to celebrate.

At one point a video of the Rebbe was shown speaking in English, an unusual and incredible moment, about the importance of Hakhel gatherings and all that these gatherings can accomplish.

To affirm this idea, it was followed by a clip of Dr. James Reich featured on JEM, where Dr. Reich explains how he attended a Sunday Night ESPN NFL Dolphins game in 1987, and he saw Rabbi Tennenhaus light a huge menorah in the end zone. The strong sense of Jewish pride he felt that night changed the entire trajectory of his life. He is now frum, married with six children, and he ends off that the Dolphins won the game. Everyone was inspired and uplifted, watching these incredible inspiring clips.

The joyous and meaningful music, the Menorah flames, and watching the Rebbe all together, one nation united as one, was riveting! All in all, it was a Hakhel night to remember.