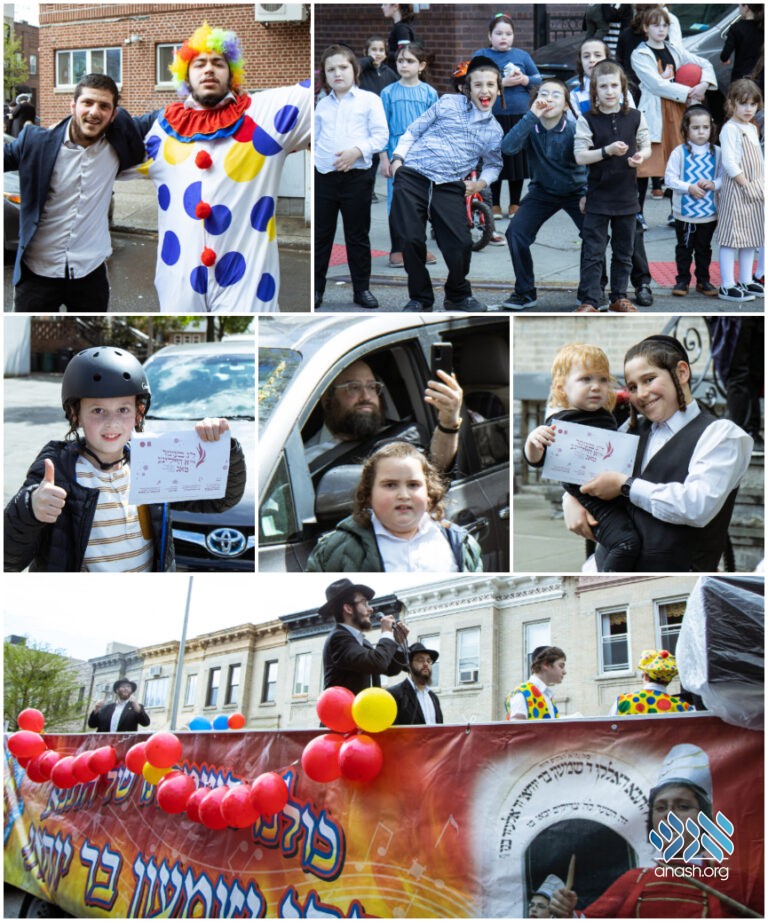 Six decorated floats drove through the streets of Boro Park, holding mini rallies on each street and bringing the joy of Lag B’omer to every resident.

On an average year, thousands of Boro Park children join a Lag B’omer parade in a local park. This year, the children couldn’t come to the parade, so the parade came to every single child.

Every year on Lag B’omer, Tzivos Hashem of Boro Park, under the leadership of Rabbi Aron Ginsburg, arranges a grand Lag B’omer parade, attended by thousands of the local children.

With Lag B’omer taking place on Friday this year, the regular parade wasn’t able to take place, so Rabbi Ginsburg came up with a unique solution: The parade would be brought to the children!

So on Friday, Lag B’omer, six decorated floats began to drive through the streets of Boro Park, each playing joyous music and with bochurim from 770 and Oholei Torah in the back.

The trucks stopped at each and every street in Boro Park, gathering the children for a mini Lag B’omer rally and a quick dance. The bochurim, some of who were dressed in festive clown costumes, also distributed special packets to each child.

Each packet contained a card with the 12 pessukim with Yiddish translation, kapitel 33 in Tehillim, which the Rebbe said to say on Lag B’omer, 18 cents for tzedaka, and a lollipop.

Over 18,000 packages were prepared, but within two hours, all of the floats had run out of packages.

“There was not a street in Boro Park that didn’t see and hear the floats, joining in the simcha of Rashbi,” Mendel Ginsburg, one of the coordinators told Anash.org. “We keep on getting warm feedback from children and their parents who appreciated the boost.”

“On a usual year, many children join the parade, but there are thousands of other who don’t. This year, every child in Boro Park partook in the parade, saying pessukim, dancing and demanding the geulah,” he said.

To help cover the costs of the parade, click here.