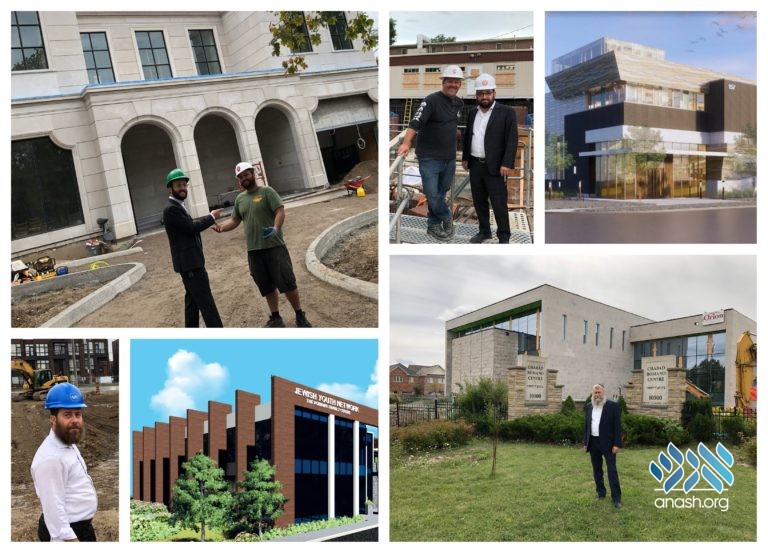 Several building campaigns are happening throughout Chabad of Toronto- and you can visit them all in under an hour.

It’s a scene we’ve all become familiar with: Chabad institutions around the world building, expanding, and renovating, shocking local organizations with their ambition – and more importantly- their success. These multi-million dollar building campaigns are almost always locally funded, and are often the realization of a dream a community never knew it had.

It is not often, however, that one city sees five Chabad houses engaging in large scale building projects at the same time. The current building frenzy highlights a unique Toronto phenomenon: multiple Chabad houses stand within several miles of each other, and each enjoys outstanding success. Chabad in the city, directed by head shluchim Rabbi Zalman and Esty Grossbaum, is experiencing rapid growth; in the past forty years, the Jewish population has exploded from 90,000 Jews to 200,000

Want to take a drive around the city to check on the progress of each campaign? If you time it right, you can get to them all in under an hour.

Begin at the top with Richmond Hill’s Chabad Romano Center, under the leadership of shluchim Rabbi Mendel and Toby Bernstein. Ten years ago, a 10,000 square foot building was erected to host the community’s shul, social events, and educational programs. The expansion, which was completed before Rosh Hashanah, more than doubled the size of the existing building, enlarging its current facilities and adding an elaborate set of playgrounds and a men’s and a women’s mikvah.

Take a 6 minute drive over to the building site of the Jewish Youth Network’s new campus, overseen by Rabbi Shmuli and Chani Nachlas. The dynamic couple, who are currently operating out of store fronts, run programs for Jewish kids throughout the city, with an emphasis on teen engagement. Their center will include spacious and state of the art facilities for a variety of educational and social programming.

Chabad of Toronto’s headquarters, known as 770 Chabad Gate, is adding another building to its 3 acre campus. The new building, on which they hope to begin construction within the year, will host a women’s mikvah with its own entrance and parking lot. The two floors above the mikvah will be utilized for Lubavitch Day Camp, which boasts 800 campers, and the Frienship Circle.

“Our current men’s and women’s mikvaos have become way to small to fit our needs,” shliach Rabbi Moshe Spalter, who serves as the administrator, told Anash.org. “This building will serve as the mosed’s outreach center. In addition to our thriving camp and friendship circle, there are thoughts to open a preschool several years down the line, which will also utilize this space.”

Rabbi Menachem and Chana Gansburg, who co-direct Chabad on the Avenue, have laid the foundation for a new 25,000 square foot center which they hope to have ready in time for Rosh Hashanah 5781. Menachem’s brother, Rabbi Levi Gansburg and his wife Rivky, just completed their own campus which exceeds 30,000 square feet and boasts a full time preschool, an underground parking lot, and the only women’s mikvah in its immediate area.

All together, the building campaigns will add over 100,000 square feet to Chabad of Toronto’s 27 centers, with total costs exceeding 40 million dollars.