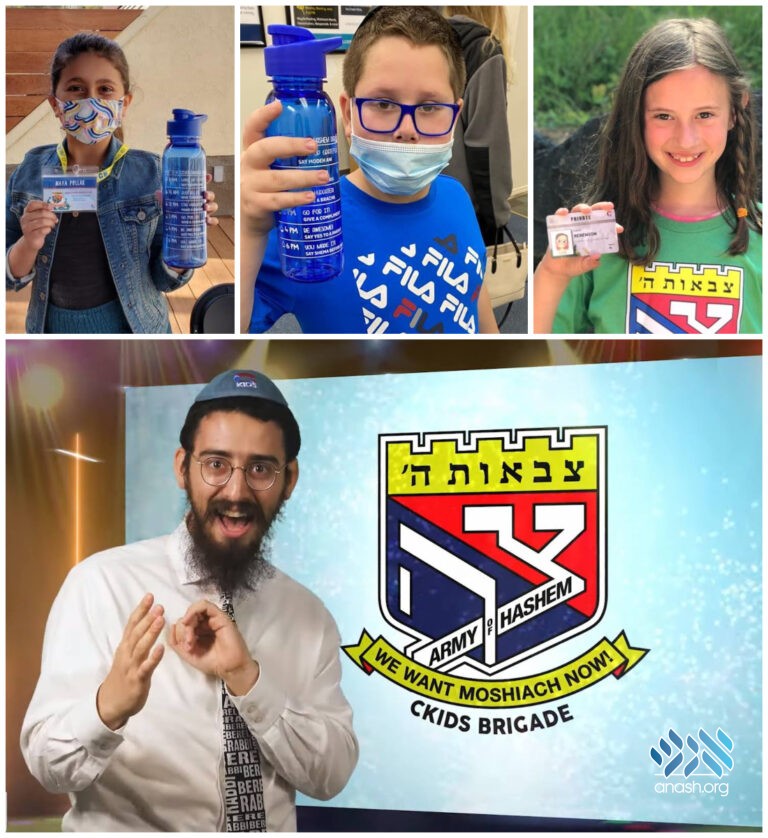 Members of the CKids brigade experienced their first Tzivos Hashem rally of the year with dynamic show host Rabbi Berel Paltiel, leaving them feeling motivated and charged with their responsibility to bring Moshiach.

Last Wednesday saw hundreds of hands and feet from all over the world clapping and jumping in step, as Hebrew School kids danced their hearts out together to the niggun of Tzama Lecha Nafshi.

How is such a thing possible?

With a Tzivos Hashem rally, of course!

Having seen the tremendous impact of the Chayolei Tzivos Hashem organization directed by Rabbi Shimmy Weinbaum, many shluchim were asking for a similar exhilarating program to inspire their local CKids as well. The offices at CKids HQ mobilized and got to work.

Using a provided curriculum, over 400 Hebrew schools were given the tools to teach the idea of the army of Hashem to the CKids audience. Five-thousand Tzivos Hashem branded water bottles were shipped out, and the kids were raring to go.

The campaign was a tremendous success. Hundreds of kids were on board, thousands of missions were checked off, and a whole new brigade of soldiers now identify as members of the most powerful army in the world.

After such a smashing first year, CKids is gearing up for 5782 – but with a new incentive: every child who does over one hundred missions is eligible for the CKids Shabbaton!

“These rallies are the soul of Tzivos Hashem,” shared Rabbi Moshe Kotlarsky, vice chairman of Merkos L’inyonei Chinuch. “After singing ‘We want Moshiach Now’ with the Rebbe, and seeing how they are a part of something bigger than themselves, the children are given a huge sense of pride and motivation. Thank you to all of the dedicated staff at CKids who made this happen!”

The young soldiers welcomed the latest recruits, celebrated with the winners of the Tishrei missions, received the new mission of the month (to get a letter in a Sefer Torah), and left feeling motivated and charged with their responsibility to bring Moshiach.

The kids are now all revved up for the month of Cheshvan, excited to complete their Mitzvah missions and study for the JewQ championship… Until they gather together again in four weeks for the next smashing rally as soldiers in the army of Hashem.