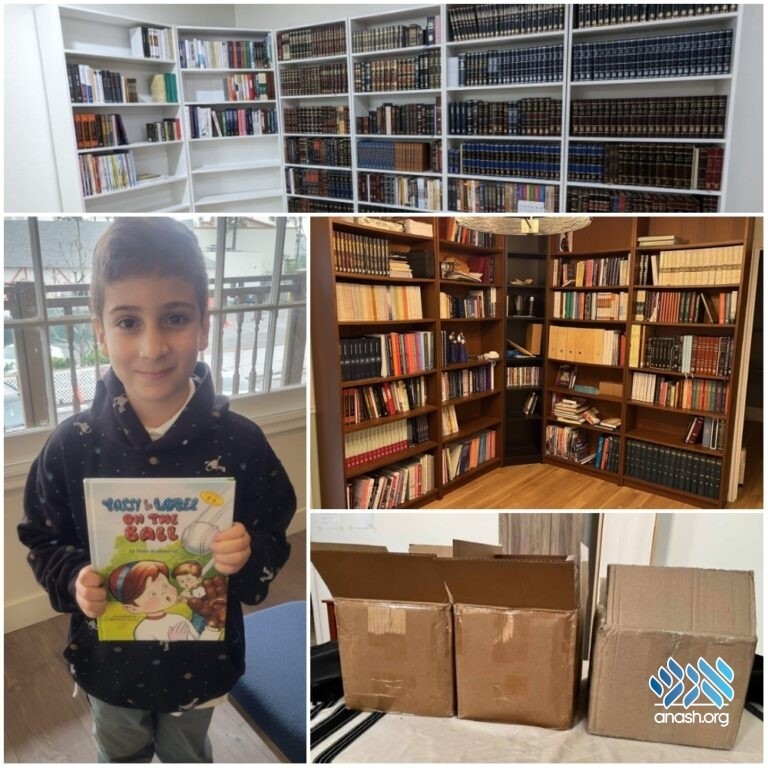 The first batch of books, which will make up the 360 libraries that were pledged by the Kinus Hashluchim, have been shipped to the eagerly expectant winners of Merkos’ library initiative around the globe.

The first batch of books have been shipped to the eagerly expectant winners of Merkos’ library initiative. One of the many hachlatos undertaken at the historic kinus just last year, this library campaign launched by Rabbi Moshe Kotlarsky, Chairman of The International Kinus Hashluchim aims to establish 360 new libraries in Chabad houses across the globe.

The enormous undertaking is timely as it comes 50 years since the Rebbe’s passionate call for libraries to be built in every city with a Jewish population.“The Rebbe taught us that access to Torah books is vital for every Jewish community, just as every city needs a doctor and other professionals to be habitable,” said Kotlarsky.

From pledge to practice, the first cases of books are rolling across the world, already making a profound impact in their new homes.

In the beginning days of their shlichus in Skylake, Florida, Rabbi Rafi Rosenberg and his wife Hindy recall how one day, a neighboring veteran shliach came to visit and was visibly impressed with the robust programming already underway. As a parting message, this veteran shliach kindly and gently pointed out the lack of an adequate library, underscoring the importance of creating an environment of learning and Torah.

“I took his words to heart,” says Rabbi Rosenberg, “and since then have considered building a library as a top priority. Even though we’re just started out in our new location, I have already invested in the basic sefarim. But there are so many titles I wish I could have, but just did not have the funds.”

For someone like Rabbi Rosenberg, receiving the new Merkos library grant changes everything. “This new library will take it to an entirely different level! I cannot tell you how excited I am, and the whole community is, to welcome all of these new opportunities to learn Torah and Chasidus. I am especially excited about the children’s books of which we had almost none. I look forward to seeing kids lying on their bellies, sitting in corners, or even at the tables with their parents, reading these new books.” Rabbi Rosenberg noted how it was particularly moving to see the cases of books being moved from his home to the new library on Hey Teves of all days.

Rabbi Menashe Shwartz of Chabad Ohr Akiva near Caesarea, Israel, is equally excited about the new sefarim coming his way. Running activities out of an established community synagogue from decades past, the relatively small library it houses is inaccessible during the week, open only on Shabbos. Together with Rabbi Eliezer Smulevitz, head shliach of Caesarea, Rabbi Shwartz had already been in the process of raising funds for a large new library accessible all week long.

“When we heard about the grant,” Rabbi Shwartz relates, “we immediately applied. Baruch Hashem, we were privileged to win, and I cannot state enough how much of a difference this will make in our community. Already facing a large hurdle of raising funds just for the infrastructure, this influx of so many new sefarim will put us miles ahead—not to mention the boost it will give our fundraising efforts.”

For Rabbi Eli Gurevitz, shliach at the Rohr Center for Jewish Life, Chabad at the Tri Colleges in suburban Philadelphia, a large swath of intellectually stimulating Jewish literature is especially impactful. “The colleges we serve are highly academic liberal arts colleges, and students are always browsing the books we have in our library and discussing them with me and between themselves. But there’s never enough literature to go around. No more! There will now be plenty to keep everyone curious and stimulated, and with the lending library element in place, the opportunities for them to engage with quality Jewish education are endless. We couldn’t be more excited about it.”

As Vivian Feen, a community member of Chabad of Greater Laurel, Maryland under the directorship of Rabbi Mendel Fogelman, succinctly said: “Oh how lucky we are!”

Build a library and transform a community: Donate today at 360libraries.org