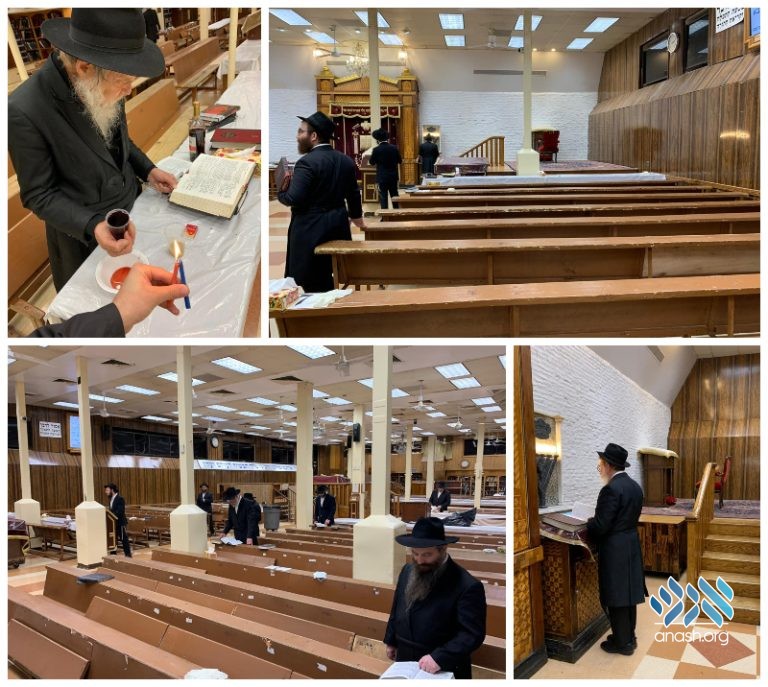 Exactly a minyan of men were allowed into 770 this past Shabbos to daven, after two months of the shul being closed. “It was very emotional to finally come back to the Rebbe’s shul,” one of the participants told Anash.org.

After two months of 770 being locked and bereft of the normal sound of Torah and Tefillah, the shul hosted a minyan this past Shabbos, with exactly 10 men allowed inside.

A rotation was set up, with the group of ten men allowed inside changing for Friday night, Shabbos morning and Shabbos afternoon. Among those allowed to join were chassanim who will be getting married this coming week, and desired to have their aufruf in the Rebbe’s shul.

Among the others that joined were Rabbi Zalman Lipsker, Rabbi Avrohom Simpson, R’ Oren Popper, who was chazzan for ma’ariv Motzei Shabbos, Rabbi Nochum Kaplinski, who made havdala, and Mendel Tzikashvili.

“It was very emotional to finally return to the Rebbe’s shul after over two months,” one of the participants told Anash.org. “Chassidim were waiting for this day since 770 had to close, and we hope that soon it will be open for all to come.”

“On the same day that Hashem returned the holy city of Yerushalayim and the Kosel to Yiddishe hands, 53 years later we were able to return the sound of Torah and davening to the Rebbe’s shul,” he said.