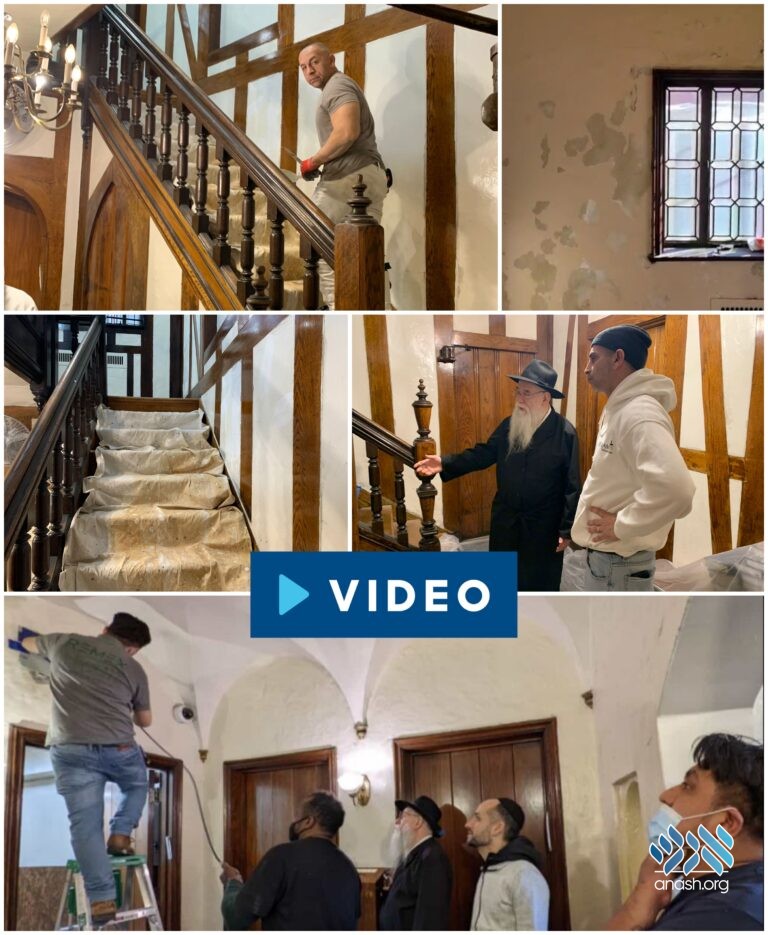 For the first time in decades, the first floor of 770 Eastern Parkway, including the antechamber of the Rebbe’s room, received a new coat of paint, a thorough cleaning and much needed repairs.

For the first time in decades, the first floor of 770 Eastern Parkway, including the antechamber of the Rebbe’s room, received a new coat of paint, a thorough cleaning and much needed repairs.

770 Eastern Parkway was purchased in 1940 by the Frierdiker Rebbe to serve as the newly reestablished headquarters of Chabad Lubavitch. The first floor was designated as the shul, and a number of rooms were dedicated as classrooms, offices or living quarters for elderly chassidim.

As the years went by, the rooms were slowly converted into offices, with the largest one becoming the Rebbe’s office, and the others becoming offices for the Rebbe’s secretariat, Yeshivas Tomchei Tmimim, WLCC, and a library for the Yeshiva students.

As the number of Chabad chassidim grew, the main shul was moved to the basement of the neighboring building, and expanded over the coming years. Nevertheless, the first floor of the actual 770 building remained the focal point of 770, with thousands passing through for yechidus, to receive a dollar from the Rebbe, or daven and learn what became known as ‘the small zal’.

With the large number of people passing through each year, the need for repairs and a proper cleaning was always a concern. In recent years, however, the wear and tear seen throughout the building demanded an immediate solution. Rabbi Chaim Baruch Halberstam of Vaad Bedek Habayis began searching for a solution that would allow for thorough repairs while keeping the changes to the historic building at a minimum.

After extensive searches, a solution that would work to his satisfaction was finally found. On Wednesday, a company that works in specialized repairs and cleaning arrived in 770 to begin the much-needed work. The entire first floor was closed off to visitors, and the repairmen got to work setting up tarps and equipment to make sure nothing would be damaged during their work.

Special attention was given to the antechamber of the Rebbe’s room, known among chassidim as ‘Gan Eden Hatachton.’ A fresh layer of paint was applied, and damaged sections of the wall were repaired, in the first time such work was done there since 5733/1973.

The workers also cleaned all the vents and areas where dust gathers, making sure to leave them spotless and immaculate.

Work is expected to continue through Wednesday, with repairs being made to most of the first floor. Sources tell Anash.org that additional work might be done in additional rooms on the floor in coming weeks.