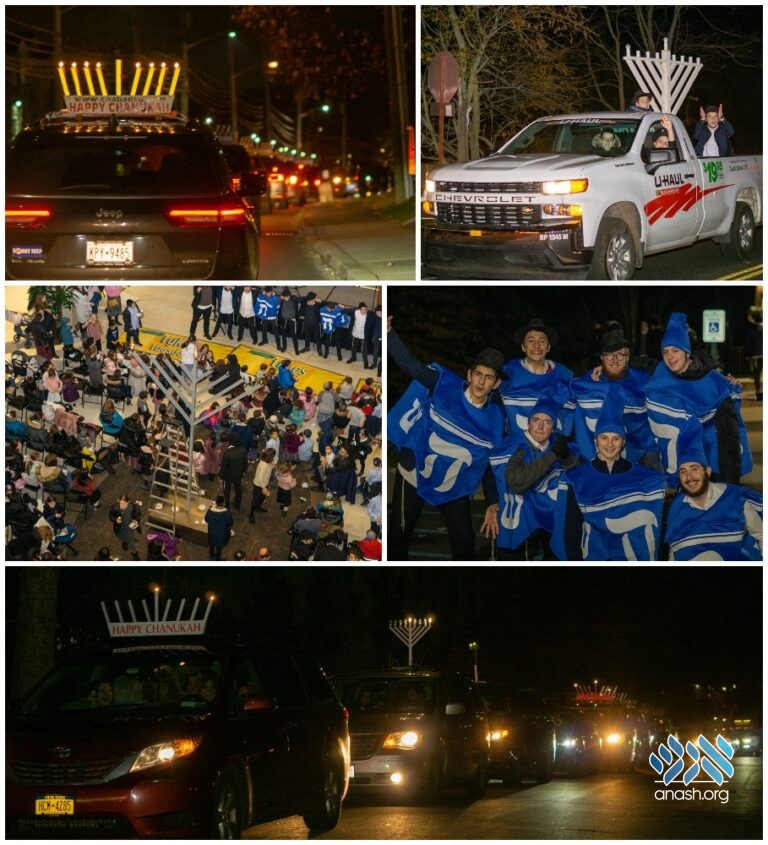 Over 120 cars were joined by 5 Mitzvah Tanks, 2 pickup trucks, a fire truck and ambulances for the largest menorah parade in Monsey’s history. The parade concluded with a grand Chanukah party and menorah lighting.

Over 120 cars were joined by 5 Mitzvah Tanks, 2 pickup trucks, a fire truck and ambulances for the largest menorah parade in Monsey’s history.

The parade, arranged by the shluchim of the Monsey Mesivta, was attended by members of the Chabad Monsey and Pomona communities. Leading the procession was a large LED screen truck, which also circled the city for a number of hours before the parade. Prior to the start of the parade, pekelach were distributed to each car, containing treats sponsored by Bingo, and maps of the parade route.

Also participating in the parade were the local fire department, ambulances, chaverim and the police, who closed off the local streets for the parade. A group of “dancing dreidels” also added to the Chanukah spirit.

The parade ended at the Palisades Mall, where a grand Chanukah party and menorah lighting was held. Joining the crowd was the rov and moroh deasrah Rabbi Boruch Lesches.

Doughnuts and drinks were distributed for all participants, before the official program began. Emceeing the event was one of the yeshiva’s shluchim, followed by the recital of the 12 pesukim by local children. The menorah was lit by Yossi Light, a close friend of the Yeshiva. Haneiros Halolu was sung by Rabbi Hershel Rosenbluh, gabbai and member of the Tzemach Tzedek shul, with live musical accompaniment by Eli Rimler. The children were then treated to a show by contortionist Jared Reydelek.

Organizers thanked the sponsor, Medrite Walk-In Clinic, for his generosity.

To help cover the costs of the parade please contact [email protected].