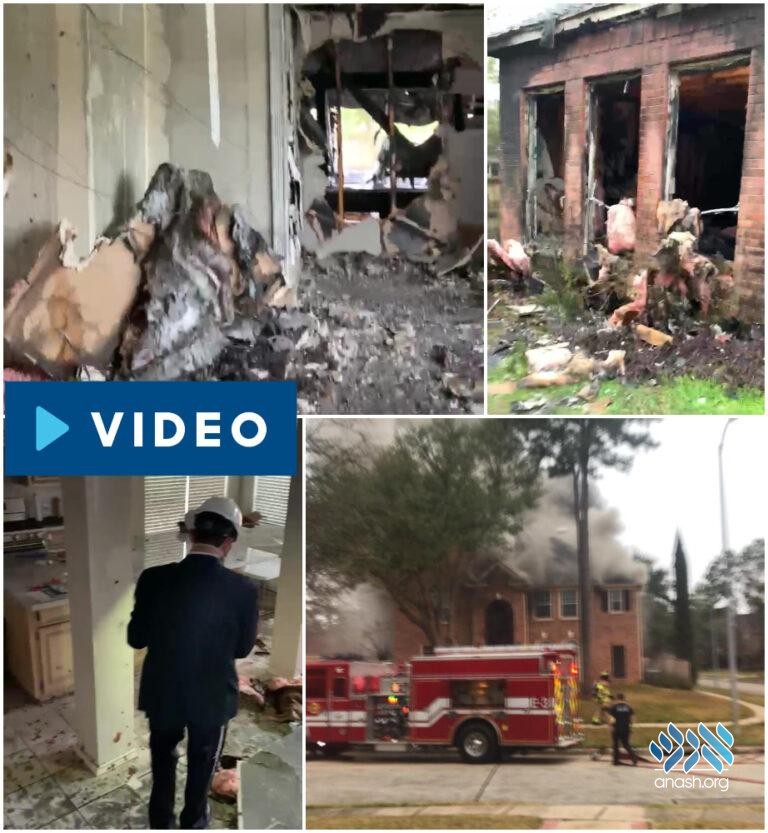 Only two weeks after Rabbi Levi and Devorah Marinovsky, Shluchim to Cypress, Texas, moved into their new house, an electrical fire ripped through their house, destroying all of their possessions.

Only two weeks after Rabbi Levi and Devorah Marinovsky, Shluchim to Cypress, Texas, moved into their new house, an electrical fire ripped through their house, destroying all of their possessions. Chassidim worldwide are rallying to their support.

The shluchim and their two children were not harmed by the fire, but all their possessions were destroyed.

“What apparently started as an electrical fire, quickly escalated to produce tremendous damage to their new house and all of their belongings,” friends of the shluchim wrote.

Rabbi Marinovsky told a local news station that his 18-month-old baby was within a foot of the fire when it first started.

“My wife was home with the baby, and the fire broke out behind the bed in the main bedroom and caught right away on the mattress and moved upwards,” Rabbi Marinovsky told them.

“It then went through the second floor, the attic and the roof, and the smoke spread everywhere. It’s a complete mess. Yesterday was not an easy day.”

The shluchim, who had moved to Cypress a number of years ago, had just moved to the new house two weeks ago following renovations.

“Rabbi Levi and Devorah moved with an overarching objective in mind: to be able to serve the community better. Creating an inviting space to be able to listen to more people, to have more meaningful and joyful celebrations, or just to hang out,” community members said.

Following the fire, the shluchim moved in with relatives, and now are working on rebuilding their home. Besides for the costs of reconstruction, they will need to buy beds, linens, furniture, and even basics such as clothing, food, diapers and toys.

“Nothing is salvageable,” Rabbi Marinovsky said. “Even if it wasn’t burned, it has the smoke damage and the chemicals, which can be toxic. All the clothes, all the kitchenware, everything is lost. The mattress literally disintegrated to the ground.”

In light of the terrible catastrophe, a group of family and friends have created a fund to help their beloved rabbi. Within hours, the page has raised over twenty thousand dollars, and the original goal of $36,000 was raised to $100,000.

“Rabbi Levi and Devorah are always giving, and it is not in their nature to ask. That’s why we are increasing the campaign goal to raise $100,000 to help them immediately find a location to continue Chabad of Cypress operations, offset costs and be able to start rebuilding their home, which we know, will be a place where everyone will be welcome,” the organizers wrote.