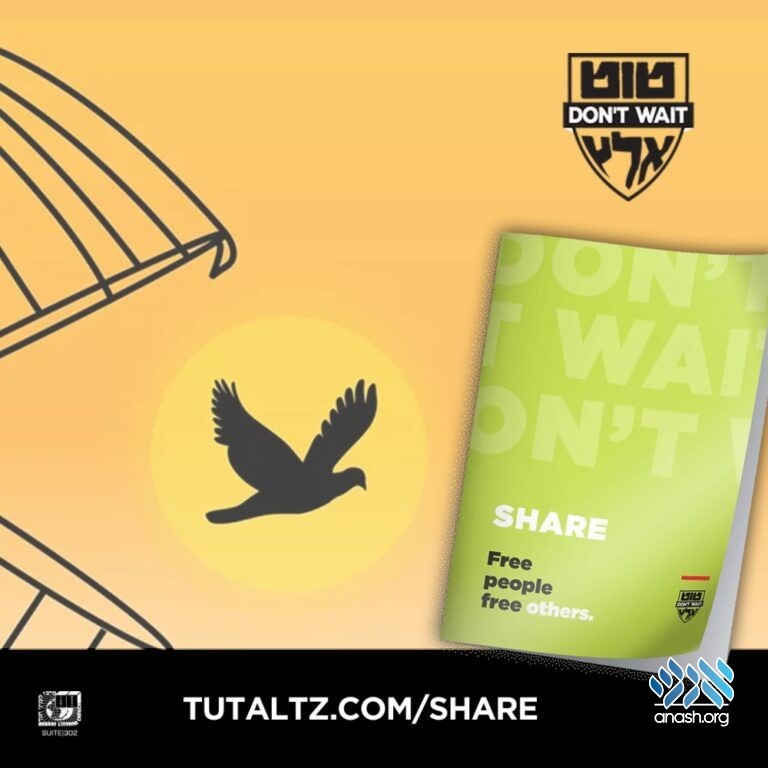 Tut Altz released the sixth and final segment of the Moshiach Mindset series, focusing on sharing the Rebbe’s Moshiach perspective with others.

The final step of cooking is serving the food to others. The last act of painting is framing for all to see. And the finishing phase of attaining a Moshiach Mindset is sharing it with others.

Since the first day that Yidden were sent into Galus, they have never stopped yearning and begging for a time of no hardships and the end to all the suffering that the Geulah promises to bring.

But is that it? Is tranquility the only ultimate purpose of Moshiach, or is that just a Galus perspective on the Geulah?

Enter “Share: Free People Free Others,” the sixth and final segment in the Tut Altz Moshiach Mindset curriculum released by the Moshiach Office at Merkos 302.

Based on the Rebbe’s maamor of Ve’atah Tezaveh, the last maamor edited by the Rebbe in 5752, “Share” educates a Chossid in the proper attitude toward the Geulah itself. More than just a time of paradise, Geulah is a state of being where the source and energy behind all of creation will be overt and tangible – pure Gilui Elokus.

The curriculum hopes to be a motivator. To encourage participants to realize that a mindset isn’t completely internalized if it isn’t shared with others. After all, if you genuinely desire the Geulah for its ultimate purpose of Gilui Elokus, shouldn’t you be actively working towards that goal by spreading the word as much as possible?

“Sharing the Rebbe’s teachings with others has always been an essential feature of a genuine Chossid,” said Rabbi Moshe Kotlarsky, Vice-chairman of Merkos L’inyonei Chinuch. “However, when it comes to sharing the messages of Geulah it takes on a whole new significance, with the very act of teaching others bringing us closer to our ultimate goal.”

Watch a Farbrengen launching this segment from the six Tiechtel brothers:

Get the complete experience at: TutAltz.com/share

Learn it with a group and register at: https://www.tutaltz.com/local

Listen to the Tut Altz audiobooks and shiurim at: https://anchor.fm/tutaltz