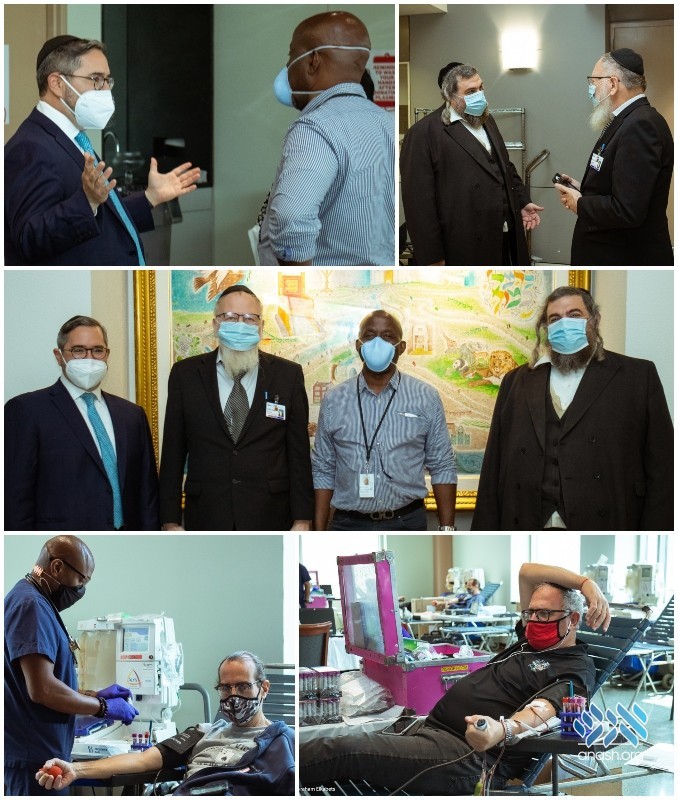 A representative of the federal government’s Operation Warp Speed program visited Crown Height’s plasma drive on Thursday to gain insight on the momentous success the frum community has had with the drives.

The US Government was so impressed by the Crown Heights community’s response to COVID-19 that they sent a representative to check it out himself.

Over the past two months, the Frum communities of the Tri-States have been making headlines, for good reason. After their communities were ravaged by COVID-19, they took the initiative to utilize the positive in the situation, and began donating plasma in numbers unseen in any other community around the country.

The media began taking notice, and before long, the government did as well. In April 2020, the Trump Administration launched Operation Warp Speed, a project to facilitate and accelerate the development, manufacturing, and distribution of COVID-19 vaccines, therapeutics, and diagnostics. Knowing the potential of plasma, and the number of donations coming from the Frum community, the heads of the project decided to reach out.

Chaim Lebovits and Abba Swiatycki of Monsey, N.Y.; and Mordy Serle of Flatbush are the founders of COVID Plasma Initiative and they were the ones the government wanted to hear from. In a conversation with Anash.org, Mordy Serle related how the government got involved.

“It was impossible not to notice that the vast majority of plasma donations are coming out of the Frum communities. With coronavirus spiking across the country, the government is desperate for other communities to step up as well,” he said.

The drive, held in Jewish Childrens Museum, was the second plasma drive held in Crown Heights. Previous drives tested the participants for antibodies, and then drove them to another location for the actual donation. At this and the previous drive, arranged by COVID Plasma Initiative in conjunction with Ahavas Chessed, the donations were taken on the spot.

“Mr. Robinson came to get some tips from the successful drives, and learn how to copy them into other communities,” Mordy Serle told Anash.org. “We helped him in any way we could, and we continue to be in contact with him to facilitate saving as many lives as possible.”