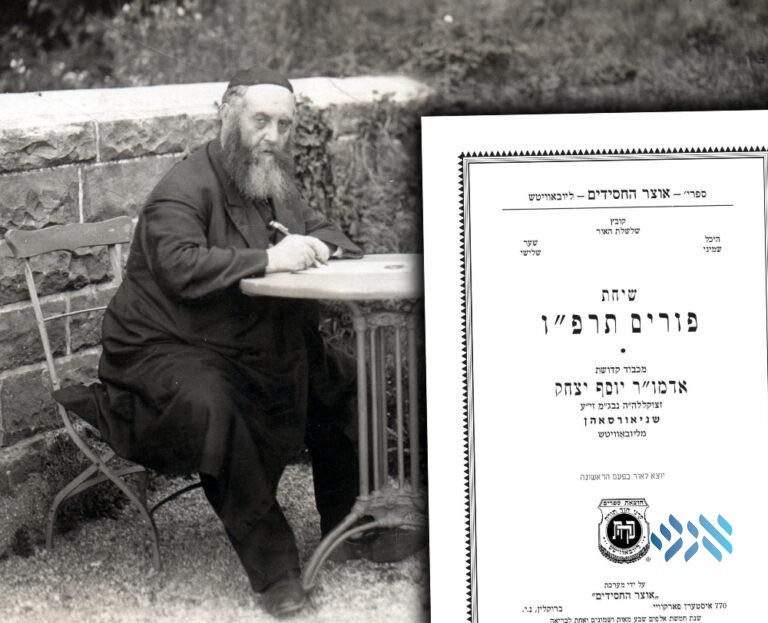 In honor of Yud Shvat, Kehos released a previously unpublished sicha of the Frierdiker Rebbe, where he declared “The Alter Rebbe was afraid of Peterburg, I am not afraid of anything in the world!”

A previously unpublished sicha of the Frierdiker Rebbe was published by Kehot Publication Society in honor of Yud Shvat.

The sicha, said on Purim 5686, was not included in the set of the Frierdiker Rebbe’s sichos when it was printed, as Kehos did not have a transcript of the sicha. A transcript was recently discovered in a bichel purchased by a Lubavitcher chossid, and given to Kehos to print.

In a conversation with Anash.org, Rabbi Aaron Leib Raskin, a longtime editor of the Rebbeim’s Torah, who is part of the editorial staff of “Otzar Hachasidim”, related some of the unique aspects of the sicha.

“In the sicha, the Frierdiker Rebbe spoke a few times about the Chein family, possibly in connection with the passing of the Radatz a few months prior,” he said. “The Frierdiker Rebbe actually said that the Radatz would have lived longer if he had stayed in Russia and not emigrated to Eretz Yisroel.”

“The Frierdiker Rebbe also discussed the purchase of Beis Romano in Chevron by the Rebbe Rashab,” Rabbi Raskin said. “Also in that farbrengen the Frierdiker Rebbe said that learning a Perek Tanya every day has an effect on the one who learns it, his children, and grandchildren.”

But perhaps the most striking comment in the farbrengen is a short paragraph, printed at the end of the booklet.

“The Alter Rebbe was scared of Peterburg [being arrested]” the Frierdiker Rebbe said, before giving a short explanation why. “I have no fear of anything in the world, including the GPU [forerunner of the KGB]!”