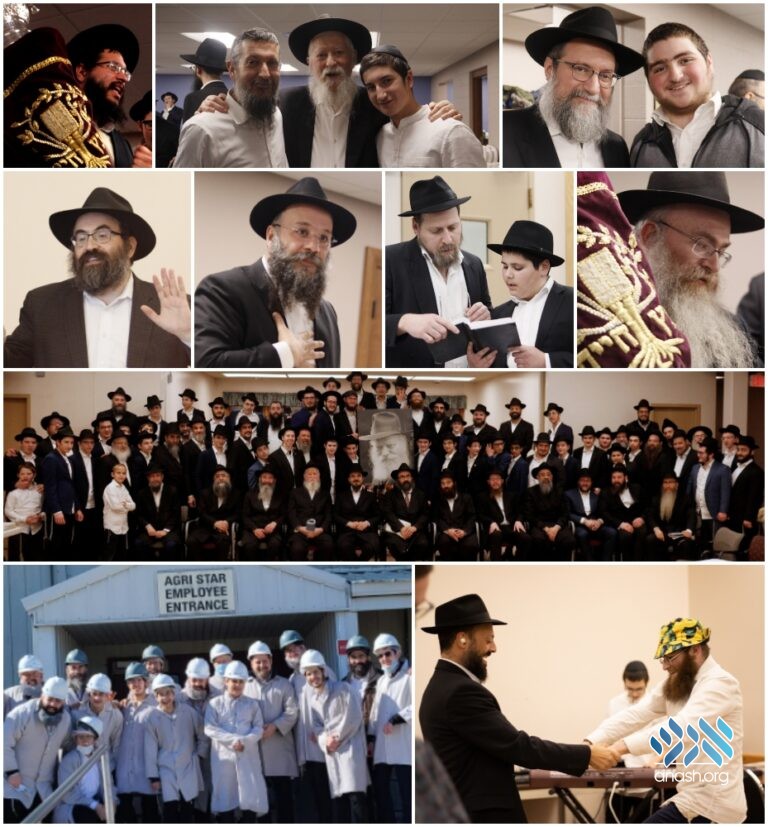 This past Shabbos, 40 fathers from across North America came to Postville Yeshiva for their first “Shabbos Father and Sons”, where they enjoyed a weekend packed with shiurim, farbrengens, and special programs.

This past Shabbos, 40 fathers from across North America came to Postville Yeshiva for their first “Shabbos Father and Sons” The fathers were greeted with a custom-designed welcome bag with information regarding the Shabbos schedule and program.

Friday morning began with a special Shiur Chassidus by the maggid shiur of Shiur alef Rabbi Mendy Karp on a Mamar of the Tzemach Tzedek discussing very relevant questions in avodas Hashem followed by Davening. A number of parents then took their sons to mivtzoyim, and the rest of the bochurim heard a shiur from Rabbi Mendy Cohen (CA) on amira l’acum which erupted into lively conversation with parents and students asking many questions and discussing many different scenarios. After a short break the parents were able to participate in the weekly Q&A by the Mashpia of the Yeshiva, Rabbi Gavriel Levin.

As Shabbos came in there was a seder of fathers and sons learning chassidus followed by a seder nigguim led by Hatomim Hashliach Shimon Lishner. After Kabolos Shabbos concluded, everyone went to their hosts for the Shabbos meal.

“The yeshiva is deeply grateful for the generous warmth and hospitality of the local community of Postville, who hosted the many fathers who came this Shabbos,” the yeshiva’s hanhala told Anash.org. In fact, the hospitality takes place every Shabbos as well, as the Postville community is famous for having Bochurim over for the meals and more.”

On Shabbos morning Rabbi Eli Benshimon, the menahel and life force of the Yeshiva, gave a shiur Chassidus on the topic of levush and bayis, and after Krias Hatorah, where one of the fathers – that came in from NY – named his baby daughter, Rabbi Benshimon, in his unique and captivating style, said a derasha on the parsha connecting the חטא העגל to פרה אדומה and drawing out a beautiful lesson in the importance of listening to רבותינו ז”ל

The seduas Shabbos, prepared with love and dedication by the Yeshiva’s cook R’ Adir Goldenberg, quickly turned into a warm farbrengen with Rabbi Efrayim Mintz (NY) Rabbi Yehoshua November (NJ) and many more fathers and hanholo and local Anash sharing stories and inspiration until mincha.

Mincha was followed by seder niggunim and chazoras dac”h by the mashpia of the Yeshiva Gedola Rabbi Avrohom Katz. Rabbi Benshimon then continued with one of his legendary stories, inspiring the bochurim to strengthen their commitment to being a ‘chayol’.

After maariv and havdala there was a fascinating shiur by Rabbi Levin on the chilazon that was used for the techeles. From there the Bochurim went to a special melave malka in a local hall where they heard words of encouragement from Rabbi Koppel Zirkind, mashgiach of the yeshiva, and Rabbi Chay Amar (FL) who challenged the bochurim and promised them a unique prize like no other. Hatomim Shlomo Amar then made a Siyum on an entire Seder of Mishnayos.

The evening concluded with a Siyum Sefer Torah, celebrating the arrival of a new Torah, procured for the local Shul by hatomim Moshe Leshes.

The next morning Rabbi Katz gave over a Shiur on Davening according to Chassidus. After shachris – followed by another siyum on a complete seder of Mishnayos by hatomim Mendel Levin – and breakfast, many fathers and sons went to the famous “Agristar” to have a tour of the oldest and most Mehudardik “shlachthoiz” in America.

The Shabbaton concluded with parents getting a chance to privately speak to hanholo about their sons.

“Everyone was  left with an inspiration to give the Rebbe nachas and bring Moshiach now,” the hanhala said.