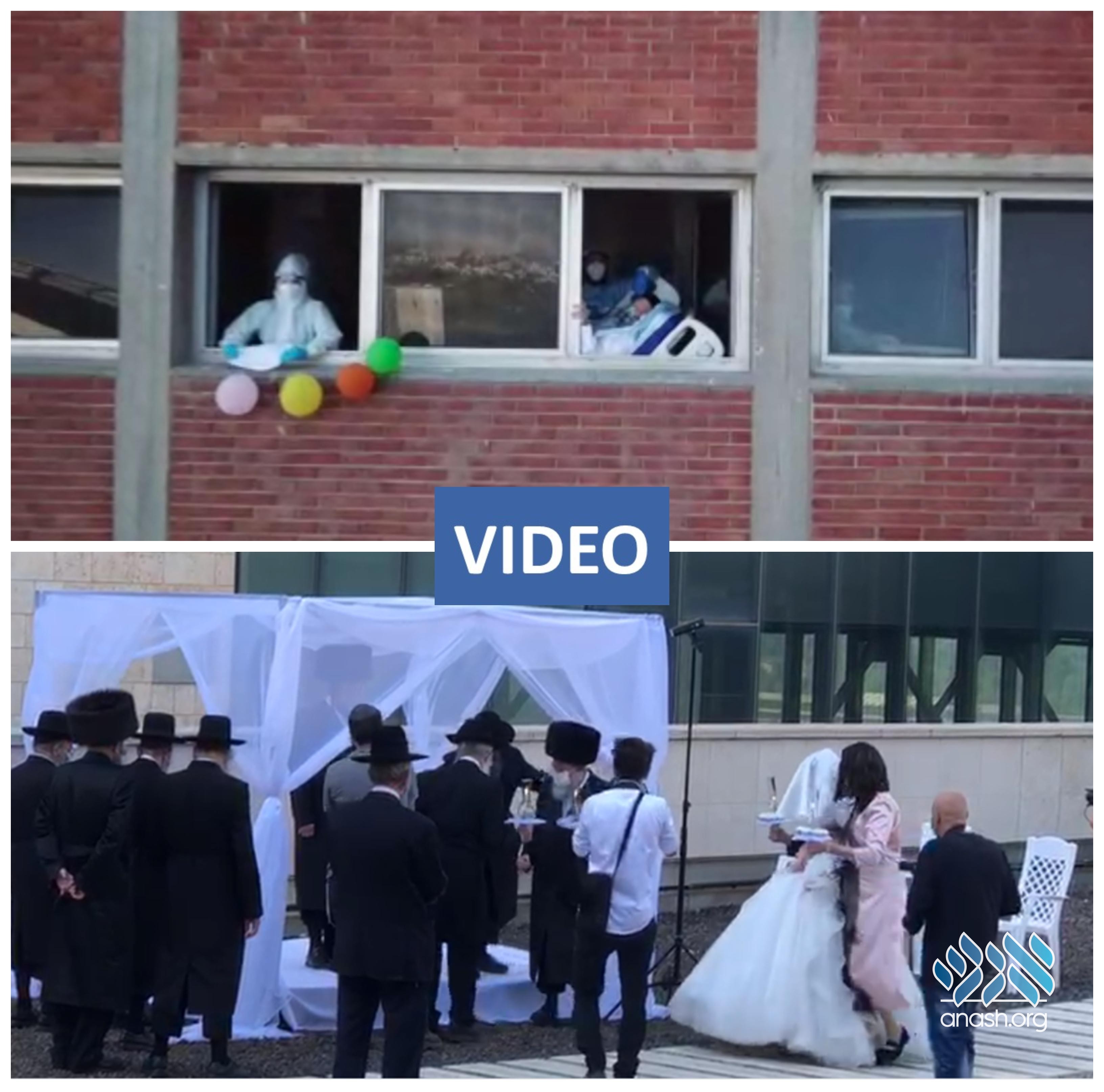 An emotional chuppah was held under the window of the coronavirus ward in Yerushalayim’s Hadassah Ein Kerem Hospital, where the chassan’s father has been hospitalized.

Not one eye remained dry at a moving scene that took place in the plaza of Hadassah Ein Kerem Hospital in Jerusalem on Sunday afternoon, when a chuppah was held under the window of the coronavirus ward, where the chassan’s father has been hospitalized in serious condition since September.

The chassan’s father was able to watch the chuppah taking place from his bed and even held a gartel from the window of his hospital room in the coronavirus ward on the fifth floor to “dance” the customary mitzvah tantz with the kallah.

The families of the chassan and kallah are Gerrer chassidim from the cities of Arad and Chatzor and the actual wedding (after the chuppah) took place in Chatzor.

Prior to the wedding, the family – who couldn’t bear the thought of holding the wedding without the presence of the chassan’s father, turned to Yad Avraham, a Chareidi medical advice organization, with a unique request – to allow the chuppah to take place under the window of the coronavirus ward.

Shimon Braun and his son Chesky, the administrators of Yad Avraham, who often work in cooperation with Hadassah, used their connections to turn the idea into a reality. To their credit, Hadassah officials immediately expressed willingness to arrange the event, which involved complex efforts due to the serious medical condition of the father.

“The family from Arad who made the request touched all of our hearts,” said Noa, the head nurse of the coronavirus ward at Hadassah. “All they wanted was that the father, a 56-year-old patient in serious condition suffering from severe breathing problems, would be able to take part in the wedding. The entire Hadassah administration, including staff members of the security, operations, communications, and construction teams and the medical staff immediately began planning the event.”

“We all wept this afternoon when the chassan excitedly waved to his father from the plaza,” Noa said. “The father was present at the chuppah from afar and could hear the brachos, while the medical staff and Yad Avraham volunteers stood next to his bed to help him rejoice. Not one eye remained dry when the family recited brachos on the microphone for the refuah of the father.”

Hadassah employees throughout the huge hospital complex – whoever could spare the few minutes – watched the scene from the windows of the offices and hospital wards, clapping at the end and sharing in the joy of the moment.

“A moving scene like this could only take place at Hadassah,” said Hadassah CEO Prof. Ze’ev Rotstein. “The opportunity to allow the father to participate in the wedding of his son – especially when he is quite ill – was an unforgettable moment – a shining example of the renowned humanity and sacrifice of Hadassah staff.”