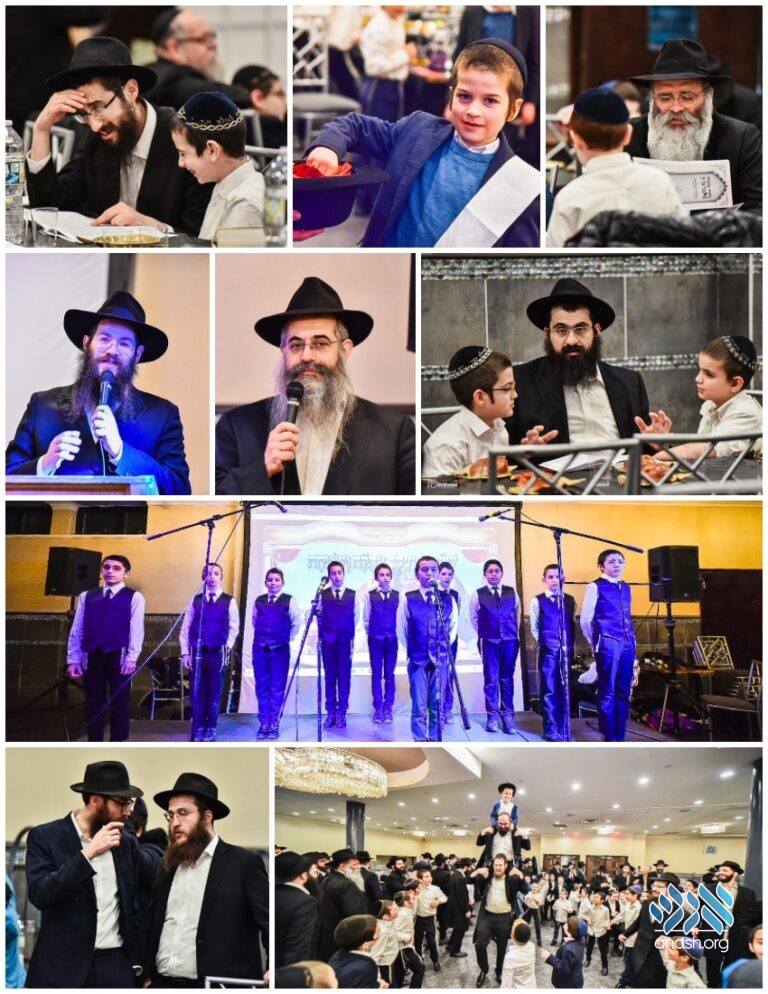 Cheder Ohr Menachem in Crown Heights held a grand ‘Avos Ubanim Melave Malka’ for parents and staff of the Yeshiva. Participants were treated to a magnificent performance of the famed Ohr Menachem Capelye.

Shortly after Shabbos Tetzave, one could notice a special crowd of Tatties and Kinderlach heading toward Crown and Albany. Yes, it is finally here, Cheder ‘Ohr Menachem’s grand ‘Avos Ubanim – Seudas Melave Malka’. At the entrance of the ULY boys were greeted by their dedicated Melamdim.

After receiving special Limud material sampling what they are learning in class. Some raffle tickets and goodies, off they go to start learning with Tatty!

Following some geshmake learning, the principal Rabbi Menachem Mendel Yusewitz invited all to wash for Melava Malka. Rabbi Yusewitz opened the event with a Dvar Torah connecting Parshas Tetzvah with Chodesh Adar and the special Brocha seen in ‘Ohr Menachem’ the Kinderlach’s Yirash Shomayim felt in their Limud Hatorah, Midos and Davening.

The vice-principal Rabbi Yosef Yitzchak Overlander then lead a Tzivos Hashem “Hecherung” and presented “TH Certificates” to children who recently rose in the ranks. Honoring these soldiers to recite the 12 Pesukim.

After a special video of the Rebbe on Chodesh Adar and the imminent Geula, Rabbi Menachem Mendel Hacohen Hendel – Menahel Kloli was invited to the stage. After thanking all the dedicated staff Rabbi Hendel shared special news and advancements in the purchase of the Mesivta building in Queens – and how all can partner in the upcoming campaign!

The crowd was then treated to a magnificent performance of the famed “Ohr Menachem Capelye” [OMC] under the guidance of Hatomim Yisroel David Shmueli the 5th-grade division performed the “Oy Rebbe” in Yiddish. A first! They were followed by a 6th-grade division who sang the long “Shoshanas Yaakov” They really did a wonderful job and received a resounding round of applause!

Rabbi Yusewitz thanked the producers of the Melave Malka Rabbi Avraham Rainitz and Hatomim Chanoch Hecht for their amazing work on this, and on another blessed initiative: the ‘Tanya Baal Peh’ program. Every class invests in their quota, leading ultimately to all Talmidim concluding cheder with 12 Perokim Tanya in their arsenal!

Rabbi Hecht came up to grant seforim to all who already were tested on their quota. He thanked all the Melamdim teaching and investing in TBP, especially Rabbi Dovber Bryski and Rabbi Tanchum Abrams who already finished their quota, and added to their annual TBP quota.

After raffles and prizes for talmidim who studied B’hasmoda, in appreciation of all his special work, our Rofeh Yedid Dr. Schechter was honored to lead Birkas Hamazon. The event concluded with Adar dancing to joyous chassidishe music celebrating Chodesh Adar!