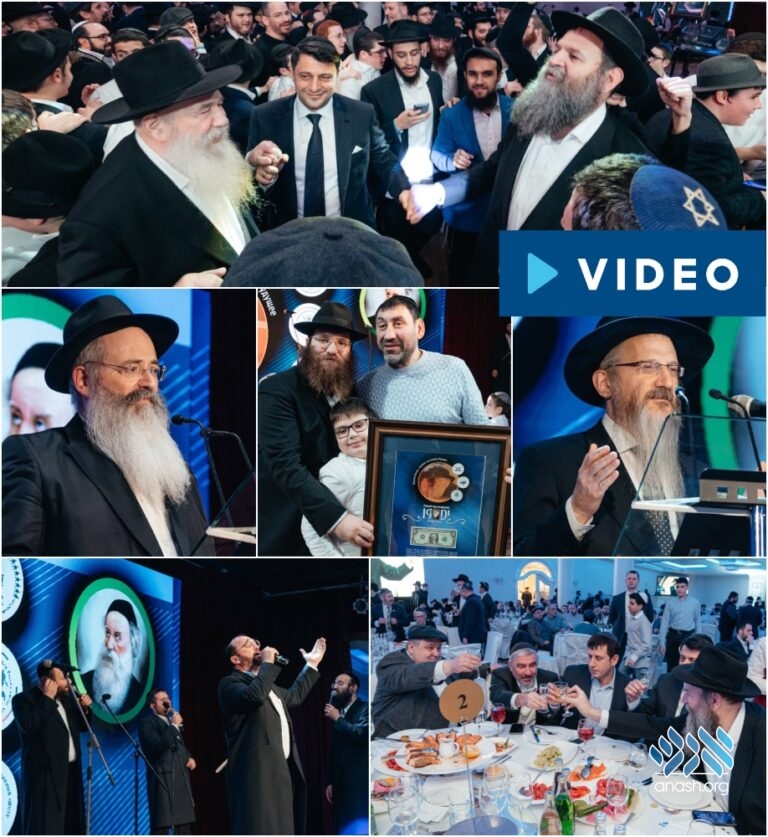 The central Yud Tes Kislev farbrengen was held at Moscow’s Triumph Hall celebrating the Alter Rebbe’s release from Czarist prison and the triumph of Chassidus over its opponents.

As the evening started, the crowds began to flock toward the Triumph Event Hall, not far from the large Victory Gates that were erected after Russia’s victory over Napoleon. The very victory that the Alter Rebbe davened for.

While the guests were greeted and seated at the elegantly set tables, they enjoyed beautiful music from the Yasis Choir, headed by Chazan Reb Yosele Kletzkin, and singer Reb Boruch Vizel with the orchestra of Reb Avraham Moshe, who continued to entertain the guests with great joy throughout the evening.

The event was emceed by the Director of Moscow’s Jewish Communities, Rabbi Mordechai Weisberg.

The main speech was given by Russia’s Chief Rabbi, Berel Lazar, who reminded the guests of the Alter Rebbe’s promise, “whoever will rejoice in my celebration, I will deliver him ‘min hameitzar el hamerchav’”. Rabbi Lazar shared that today’s ‘meitzar’ is the lack of peace. But by celebrating today, we will surely merit “pada beshalom nafshi.” When one is busy learning Torah, they are lifted above all mundane matters and their worldview changes. Eventually, this has an impact on all his surroundings.

In conclusion, Rabbi Lazar announced the opening of a new Torah Center in Moscow, and invited everyone to take on a hachlata tova to add to to their own Torah learning.

Additional speakers were philanthropist Mr. German Zecharyaev, founder of the STMEGI fund, and Rabbi Aharon Kanievky, the Rebbe’s shliach to Kfar Saba, who left Russia with his family 52 years ago and has since built up a Chassidic empire in Israel.

Rabbi Yitzchak HaKohen Kogan, Rav of the Bolshaya Bronnaya shul, blessed the crowd with Birkas Kohanim and was honored with drawing the raffle on a dollar from the Rebbe. The Klein family kindly donated the dollar in loving memory of their father, the Rebbe’s Mazkir, Rabbi Binyomin Klein a”h.

Bentching was led by the shliach to the Skolkovo neighborhood, Rabbi Dovid Boroda, in appreciation and recognition of his father, Rabbi Alexander Boroda, President of the Federation of Jewish Russian Communities, who could not attend personally.

After joyous dancing, the guests sat down to a Chassidishe farbrengen which lasted until the wee hours of the morning, when everyone dispersed into the snow-filled streets.

You can see a video with highlights from the evening below: