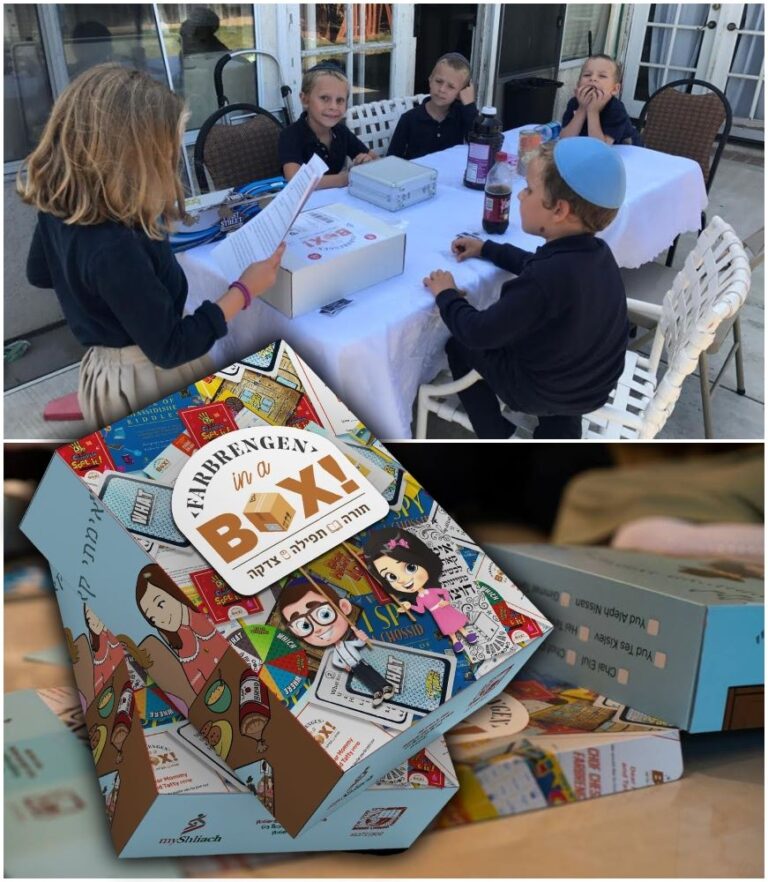 The wildly popular, Farbrengen in a box, initially only offered to shluchim is now available for anyone to buy in Crown Heights stores or online.

As the streets of Kingston Ave fill with Shluchim, the popular “Farbrengen In-A-Box” previously only accessible to Shluchim online, is now available for all in Crown Heights stores

Next time you’re shopping down Kingston Avenue, look out for this unique light blue box, it’s not a board game, and it’s not Matzah; it’s a Farbrengen-In-A-Box. The Box, Until now, exclusively found in Shluchim’s homes, has now been made available to all.

Farbrengen-In-A-Box was initially created to send a portable, easy-to-use Farbrengen to Shluchim’s families on every major Yomei Dipagra.

Prior to days such as Yud Alef Nissan, Yud Tes Kislev, Yud Shvat, and Gimmel Tammuz, Shluchim would receive a beautifully designed box filled with a written-out farbrengen, a fun board game with the theme of that particular day, raffles, prizes, and a trendy arts n’ crafts.

The Farbrengen is made so that it’s educational and enjoyable for every single member of a family. The Farbrengen includes a detailed history of the special day, various stories of Rebbeim and Chassidim, learning a Niggun, and much more.

“We hoped to create an authentic Farbrengen atmosphere by writing out the curriculum as an interactive dialogue with each family member getting a part to read and explain, “says Avremel Silberberg, Farbrengen-in-a-Box coordinator. That unique interactive experience makes the boxes so powerful and sought after.

“The combination of being both fun and educational empowers parents to create quality family time centered around Chassidishe content,” Explained Rabbi Mendy Kotlarsky, Executive Director of Merkos 302, “something every home can benefit from, especially in this day and age.”

As Mrs. Rivki Cherruf, Shlucha on Campus in Birmingham, UK, put it, “The Farbrengen in a box is a great way to strengthen us as a family. Sitting down together as a family to Farbreng with our kids is so important. It creates a Chassidisher home.”

For the upcoming Kinus Hashluchim, All Shluchim will be able to purchase a Fabrengen in a box by the Shluchim resource Fair for their families and communities, or by clicking here.

Look out for Farbrengen-In-A-Box in local Crown Heights Judaica shops or you can order online by clicking here.