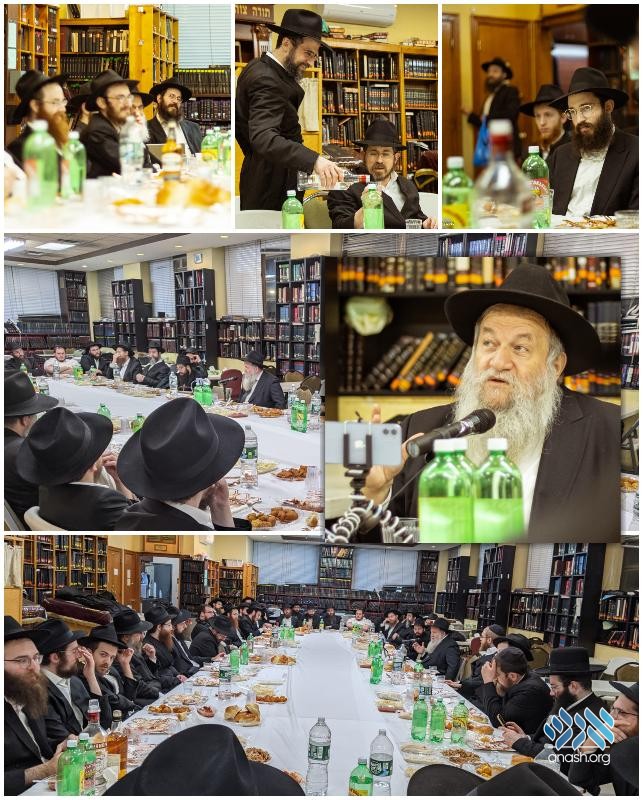 On Yud Tes Kislev, Crown Heights mechanchim gathered for a farbrengen arranged by Igud Hamelamdim and led by Rabbi Zushe Winner, who empowered the melamdim and challenged them to new heights.

Each year, on the Rosh Hashana for Chassidus, Crown Heights is blessed with an abundance of special farbrengens. But there is one farbrengen that earns special recognition: the annual Yud Tes Kislev farbrengen for mechanchim arranged by Chabad chinuch organization Igud Hamelamdim

This year, over 60 mechanchim, each a community influencer in their own circle, came together to reenergize their passion for chinuch with Chassidus and chassidishe values. At a fully catered seuda, the melamdim heard words of inspiration from Rabbi Zushe Winner, Rosh Yeshiva of the Lubavitch Yeshiva at Chovevei Torah, Rav and Shliach in Brighton Beach. With wisdom and wit, he enthralled the crowd with insightful ideas.

“A melamed is an honored title,” Rabbi Winner told the melamdim. “In fact, many great geonim would keep the title ‘melamed’ for themselves.

“A melamed holds the future of the next generation, particularly today when atmosphere is not what it used to be. Chinuch today is true shlichus!” Rabbi Winner who wears the hat of both a shliach and a mechanech discussed the connection between the two.

He shared with his listeners a personal yechidus he had, when he asked for personal brachos and the Rebbe told him that the primary and innermost matter was the chinuch of youth (דבר העיקרי והפנימי חינוך הבנים). “That means that you must give your heart and soul to the talmidim,” he said.

Nearing Chanukah, he encouraged the melamdim to be “on fire” to the extent that they light up their students too.

“Through we host extensive courses and seminars throughout the year on the techniques of teaching, nothing compares to the impact of a farbrengen. That’s where the melamdim focus on their identity and mission as a chassidishe melamed. They sit together with fellow Lubavitcher melamdim, to hear and discuss what chassidishe chinuch is meant to be.”