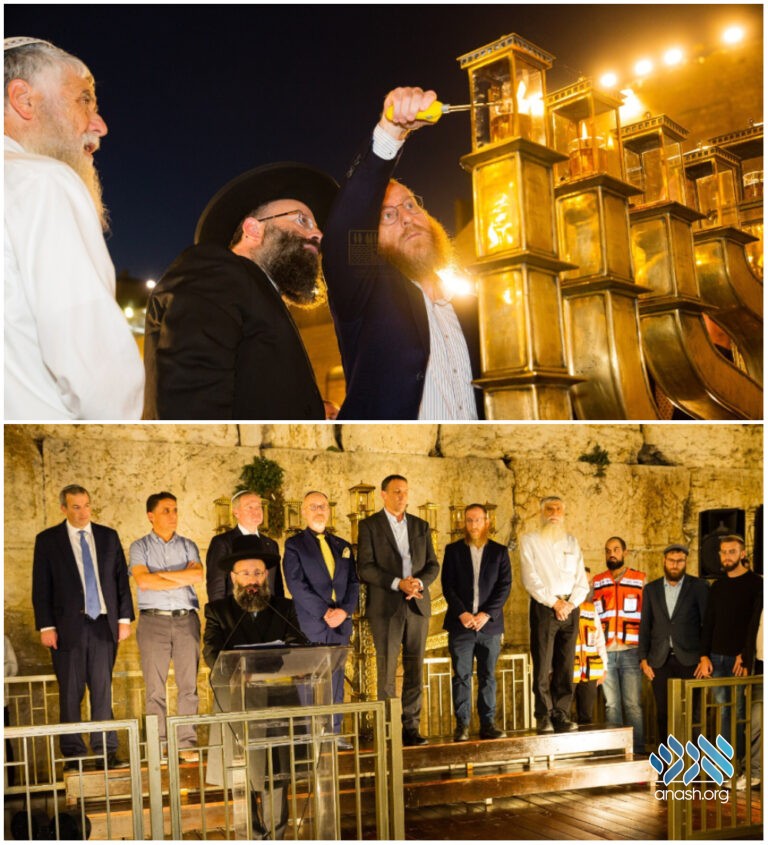 On Monday, family members of Eli Kay Hy”d, who was murdered in the horrific terror attack last week, took part in the menorah lighting ceremony at the Western Wall.

On the second night of Chanukah, family members of Eli Kay Hy”d, who was murdered in the horrific terror attack last week, took part in the menorah lighting ceremony at the Western Wall.

The menorah lighting was held in the presence of the rabbi of the Western Wall and holy sites, Rabbi Shmuel Rabinowitz; the director of the Western Wall Heritage Foundation, Mordechai (Suli) Eliav; minister for religious affairs, Minister Matan Kahana; MK Miri Regev; the director of the office for religious affairs, Meni Ma’atok; the president of Yeshiva University in NY, Rabbi Dr. Ari Berman; the defense minister of Ukraine, Minister Oleskii Reznikov; Eli Kay’s family, Hatzala paramedics who rushed to the scene of the terror attack where Eli Kay Hy”D was killed, and the public.

Rabbi Shmuel Rabinowitz, Rabbi of the Western Wall and Holy Sites, said, “We are living in a generation of great miracles – but also in the generation of pre-Messianic suffering. A generation of struggles and great hardship. It is not easy to recognize how great this time is. How great our privilege is to be living in this generation. The soul pulls us toward seeing the here and now. Seeing the small things. Eli, may G-d avenge him, understood the greatness of these days. Of life in the Land of Israel. Of working the holy land. Of living in Jerusalem. Eli taught us all to look at the big picture. You brought Eli’s great light here today, your light, as parents and siblings. ‘Rejoice not against me, my enemy; although I have fallen, I will rise; although I will sit in darkness, the Lord is a light to me.'”

Minister for Religious Services, Matan Kahana, said, “During Chanukah we mark the great miracle that happened to the Jewish nation during the Hasmonean period, that the Blessed be He let many be defeated by few and evil by the righteous. But we also have to remember that already in the generation of Matityahu’s sons, the separation in the nation began which ultimately led to the destruction of the Temple. The message to all of us from the story of the Hasmoneans is that we are all obligated to do everything to be united. Happy Chanukah.”

The Chanukah candle-lighting ceremony is also broadcast from the Western Wall Plaza on large screens at the Habima Square in Tel Aviv, an initiative of the Western Wall Heritage Foundation.