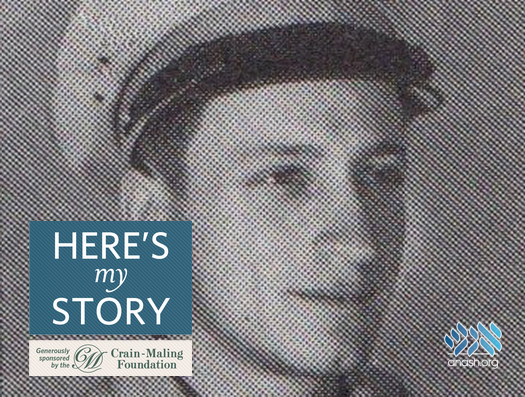 After serving in the U.S Armed Forces during the Korean War, Mr. Mendel Greenbaum (1929 – 2015) worked as a plumber in New York City. He was interviewed by JEM in March of 2011.

Before I was drafted into the U.S. Armed Forces during the Korean War, I came to see the Rebbe. He was very young then, having just taken over the leadership of Chabad, and it wasn’t too difficult to get an audience with him.

I told him that, in the atmosphere of the army, I would be spiritually far away from Torah, and I was worried about that.

So the Rebbe said to me, “Sometimes in life you have to go back, so that you can go forward in the future.” But I was nervous being in the presence of the Rebbe, and I couldn’t really understand what he was trying to tell me.

Seeing the look of confusion on my face, he then got up from his seat, came around his desk and stood in front of a chair that was next to me. “Look,” he said, “if I want to jump over this chair, I can’t, because I’m right in front of it. But if I back up a bit and then run forward, I can jump over the chair with not much difficulty.”

He continued, reinforcing his point: “Sometimes in life, you have to go back to go further forward, and to reach higher spiritually.”

He then spoke about the good I could accomplish while in the army, where I would be in a position to influence other Jewish soldiers and bring them closer to Torah.

Ultimately, I was never sent to Korea, but to Europe. In the meanwhile, I was stationed at Fort Pickett, Virginia. And while there, I began a correspondence with the Rebbe.

I initially wrote to him for encouragement and in response – along with a letter dated the 2nd of Adar I, 5711, or February 8, 1951 – received from him the tract by the Previous Rebbe addressed to soldiers: Courage and Safety through Faith and Trust in God.

“Read it and you will feel encouraged and optimistic,” the Rebbe wrote. “As to the question of what one can accomplish, etc., perhaps you know that my father-in-law [the Previous Rebbe] said, quoting the Baal Shem Tov, that sometimes the whole purpose of a soul coming down on this earth and living 70-80 years is to do a fellow Jew a favor, either materially or spiritually. This goes to show how important is a good deed. You in the army certainly have many opportunities to do your co-religionists many good deeds, materially or spiritually. This ought to make you feel very happy.”

He closed the letter emphasizing the importance of the daily mitzvah of putting on tefillin which helps to ensure a long life and ended with: “I want to send my regards and best wishes to your comrades-in-arms and to wish them safe return home,” adding that the Previous Rebbe recommended servicemen to recite Psalm 23 (that begins, “G-d is my shepherd, I shall not want…”)

In subsequent letters, he always enclosed something – a booklet about Purim, Passover or Chanukah, which he wanted me to share with my fellow Jewish soldiers. And when I wrote that I was sorry for having misplaced some coins that he had given me, he sent me a quarter.

He wrote: “Do not be upset about losing the quarters. I’m sending you herewith another quarter, originally contributed to one of our sacred causes, and I wish you success.”

He went on to encourage me to continue to make every effort to bring Jewish soldiers in my unit closer to Torah: “I was very pleased to read that you tried to influence some of your fellow Jewish soldiers in camp towards better religious practice. I am sure you will continue to do so with even greater effort.”

He again closed the letter with, “Best regards to your comrades…” this time in his own handwriting.

He even made a point of reminding me to speak with my commander to arrange a furlough for Passover so I could celebrate in a Jewish atmosphere and urged me to connect with the Chabad chasidim living nearby. In particular, when I was transferred to Munich, he wanted me to visit and deliver a booklet of Chasidic teachings to a Chabad chasid by the name of Rabbi Snieg, adding, “I am sure he will do all he can to help you, in every way possible way.”

When I reported that I had visited Rabbi Snieg as he requested, he replied that he was glad to hear it, because “I have been wondering at your long silence.”

Can you imagine that he noticed when two months passed by without a letter from me? I got the sense from this – and from his prompt responses – that the Rebbe really and truly cared about me and all the Jewish soldiers in the armed forces.

I tried to be a positive influence on them as he kept urging me to do. And I always shared the materials he sent with those who were interested.

I also realized the truth of what the Rebbe told me when I had met with him before I entered the army. Being far from my community put me in a position to bring others closer to Torah. Just as the Rebbe told me, “Sometimes in life, you have to go back to go further forward.”