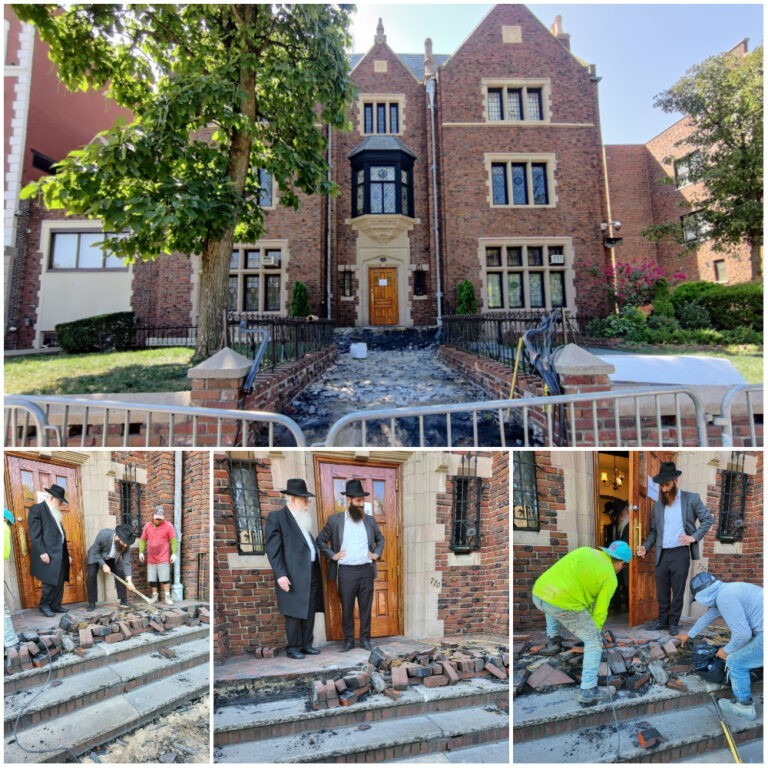 An extensive project for repairs at 770 that has been going on all summer, upgrading the infrastructure around 770, is nearing completion, with the final steps being concluded this week.

An extensive project for repairs at 770 that has been going on all summer, upgrading the infrastructure around 770, is nearing completion, with the final steps being concluded this week.

Since the renovations were so extensive, they were planned and completed in stages. Stage one was the repair of the front porch of the original entrance to the Library building. The area was in disrepair and was allowing water to enter the building. Stage two was to repair the walls in any places where there were leaks or where the walls were peeling from the inside. They made sure to waterproof the walls as well to prevent any leaking indoors. The walls were also cleaned and any place where there was a gap in the stones was filled in with concrete.

The third step of renovations was critical repair to the sidewalk in the yard near the tashlich area. There were stones that swayed from side to side when stepped on, in addition, the arrangement of the stones was corrected so that a new drainage channel could be built.

The committee has just started with the last stage of this much-needed project. Workers have begun to repair the sidewalk and the main entrance of 770 from the street to the steps of 770 itself. Special attention was paid to the red stones at the entrance to the building, Since the stones are original,  placed in 1977, the stones are being preserved as much as possible. They are cleaned and returned to the walkway and strong concrete is put underneath them to correct any previous problems.

This project was arguably the most important and pressing because many of the stones were completely destroyed after putting down salt to help melt the snow. The salt actually seeped into the bricks and broke down the concrete. This was an ongoing problem, and every few months another part of the bricks needed to be repaired. In addition to that, every two to four years the bricks had to be reinforced. Unfortunately, several people fell and slipped from the snow and ice in this area and needed medical treatment. Therefore the new renovations include a special automatic electrical system for defrosting and melting the snow to prevent such issues from occurring in the future.

All the work will be finished in just two months, and was overseen by Bedek Habayis 770 under the direction of Rabbi Chaim Baruch Halberstam and carried out by Rabbi Yossi Rabkin who is experienced in the field. He is assisted by his son-in-law Rabbi Noson Losh. All repairs were made with approval and coordination with Agudas Chassidei Chabad.

You can see videos of the renovations below: