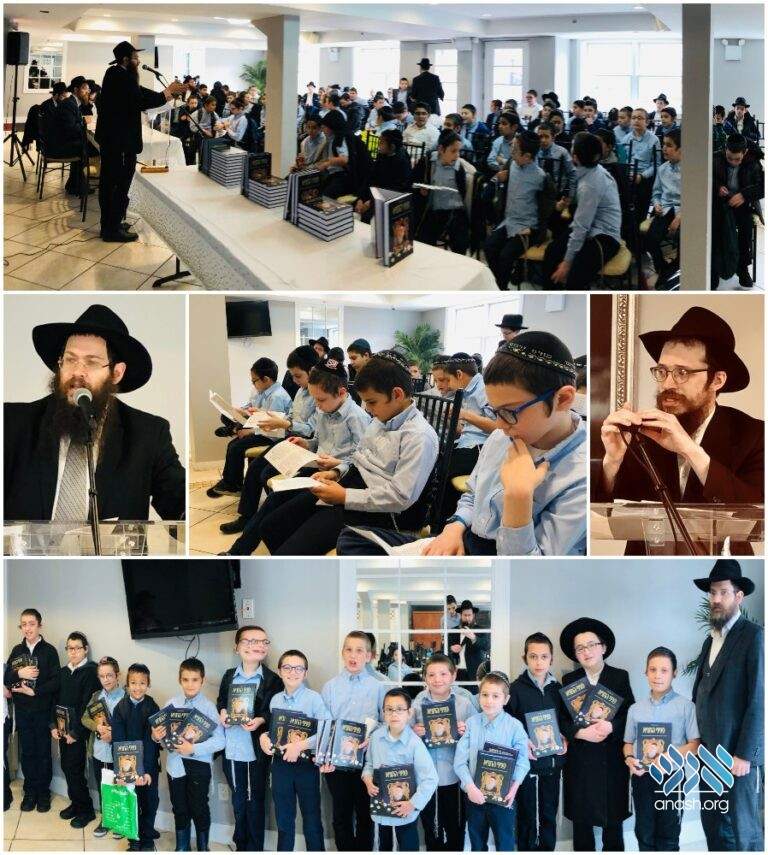 A Special 28 Nissan Kinus for Cheider Ohr Menachem took place this past Friday in Eshel Hall in Crown Heights, where children were inspired to do what they can to bring Moshiach, and rewards were distributed for children who excelled in Tanya Baal Peh.

A Special 28 Nissan Kinus for Cheider Ohr Menachem took place this past Friday in Eshel Hall in Crown Heights, where children were inspired to do what they can to bring Moshiach, and rewards were distributed for children who excelled in Tanya Baal Peh.

The Kinus started with the Rebbe’s words on 28 Nisan and divrei chizuk from the Menahel Rabbi Menachem Mendel Yusewitz about the responsibility of each and every Talmid to “do all he can to bring Moshiach now!”

To the surprise of the Talmidim, s’gan menahel Rabbi Yossi Overlander announced on a New Mivtzah of Mishnayos Ba’al Pe as part of the great efforts to bring the Geulah!

Rabbi Overlander gave a special presentation of the Mivtzah rules and about the amazing prizes which can be received. Talmidim will be receiving special points for each Mishnah, Perek and Masechtah which they will be buying with big sets of sifrei kodesh of all kinds.

“This is something we never had before,” says program and mivtzah directors Rabbi Avrohom Rainitz and Rabbi Chanoch Hecht who successfully planned this mivtzah.

“The mivtzah will be taking place over three months, and will be continuing throughout the summer program as well,” they said. “A strong emphasis on chazara will also be rewarded in our point system. We believe to see many Siyumei Masechtes in the following weeks.”

In addition, Ohr Menachem did not give up on the traditional Friday ’Geulah UMoshiach Shiur.’ After the special presentation, the Rebbes sicha was given out, and the kinus was honored with the participation of kita hey teacher Rabbi Yisroel Batnik, who successfully leads the shiur every week in cheider.

To conclude the program, fifteen talmidim were called up to the stage to be rewarded for their efforts in Ohr Menachem Cheider’s Yearly Tanya Ba’al Pe Program. Calling them up was melamed of kita zayin and program director Rabbi Chanoch Hecht, who presented them with over 40 sifrei kodesh for completing full perokim of Tanya Ba’al Peh.

The talmidim then went home happily, but not before receiving an official catalog of sifrei kodesh for the Mivtzah Mishnayos and a sweet treat.

“A grand thank you goes to our principal Rabbi Menachem Mendel Yusewitz and vice-principal Rabbi Yossi Ovelander for planning this special event and for all their daily efforts in the chinuch of our children al taharas hakodesh,” organizers said.