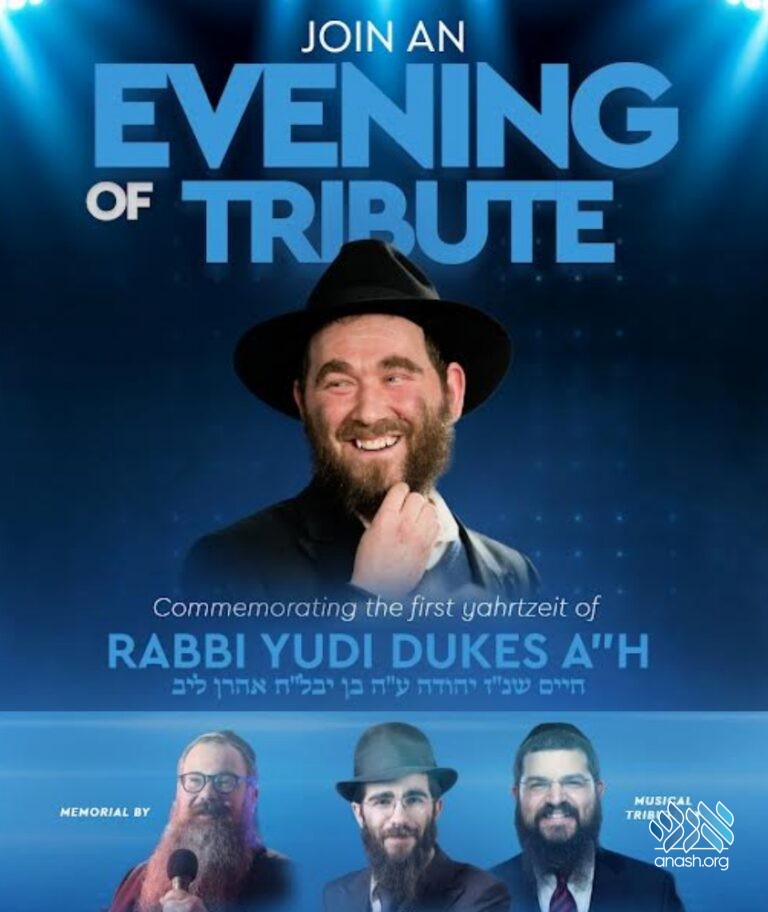 The first yahrzeit of JNet director Rabbi Yudi Dukes will be marked with a virtual tribute event featuring Rabbi Shais Taub, a musical tribute by Eli Marcus and Benny Friedman, and the launch of ‘Yudi’s Legacy’.

As the first yahrzeit of Yudi Dukes approaches, we take a moment to celebrate a pillar of the Chabad world who literally devoted his life to JNet, the Jewish Learning Network. Now, a year later, his legacy is just beginning.

In January of last year, Rabbi Yehuda (“Yudi”) Dukes, the pioneering director of JNet, devoted husband and father of 6, and inspiration to many, was taken from us at the prime of his life. He was 39 years old when his soul met its maker.

Even as he spent months in a coma, then on a ventilator, Yudi inspired a movement of people who turned over the world in the merit of his recovery.

Yudi Dukes took the reins of JNet shortly after he got married to his wife Sarah, working tirelessly to connect people around the world with phone chavrusas for weekly Torah-learning sessions. The organization he left behind now facilitates thousands of study partnerships and has only begun to scratch the surface of Torah-study possibility.

“Yudi’s entire life mission was to bring people closer to Torah,” says Rabbi Mendel Groner, the new director of JNet, who knows he has big shoes to fill. “He knew that connecting someone with a weekly chavrusa would uplift them forever. JNet was his passion.”

“Through his work at JNet, Yudi impacted countless lives, inspiring them to share Judaism with others,” says Rabbi Mendy Kotlarsky, executive director of Merkos Suite 302, the organization behind JNet.

Yudi will always be remembered as a patient teacher, devoted family man, and someone who never turned down a chance to do someone else a favor. Even a few months before his passing, as he was asked to share a message from his hospital bed, he was the one giving comfort to all.

JNet and Merkos 302 will be hosting a tribute event honoring Yudi’s Yahrzeit and launching Yudi’s Legacy. The event will be streamed live at Yudislegacy.com on Monday 8 Shevat, January 10 at 7 pm.

Event highlights will include a memorial by Rabbi Shais Taub, a musical tribute by Eli Marcus and Benny Friedman and the launch of Yudi’s Legacy.