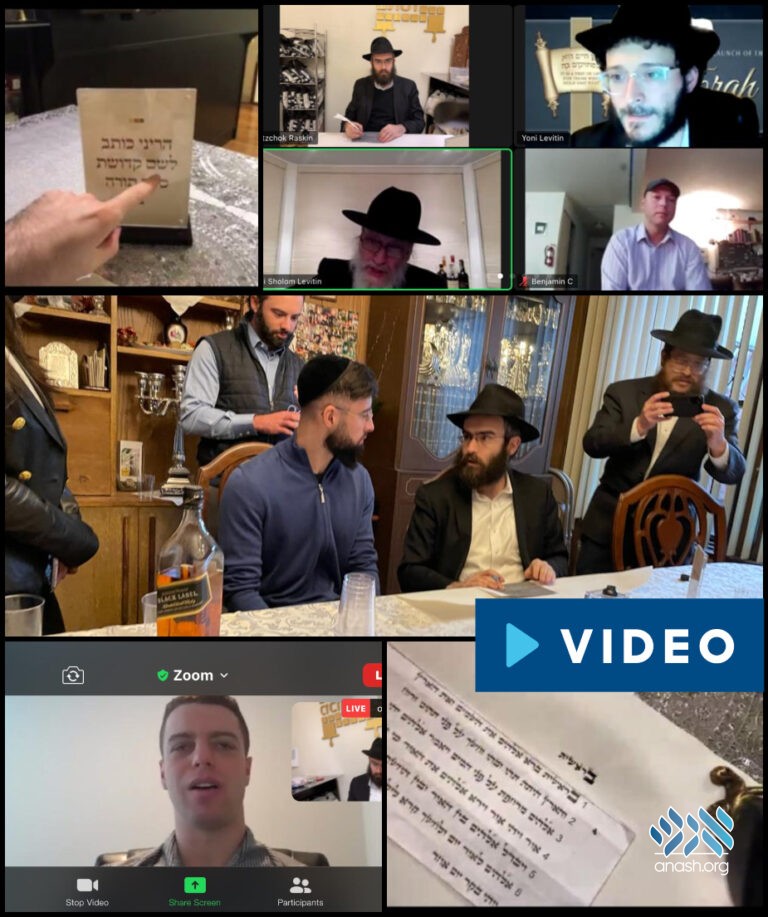 With Covid regulations rendering in-person community activities impossible, several Shluchim have found an original way to bring their congregants together with an ambitious new undertaking.

As COVID-19 safety laws continue to hinder plans for more traditional events such as Chanukah gatherings and daily minyanim, Shluchim across the globe have been pushed to find new ways to bring their communities together while adhering to local health regulations forbidding in-person gatherings. Like all challenges, many have discovered that the pandemic has uncovered new opportunities for connection and growth.

In recent weeks, several Shluchim have found their answer in the form of a community-wide haschalas Sefer Torah- over Zoom.

The idea of writing a Sefer Torah in response to a pandemic is not a new one. As the Frierdiker Rebbe recounts in a fascinating letter, a severe epidemic once ravaged the town of Mezhibush during the time of the Ba’al Shem Tov. In response to the villagers’ plea for help, the Ba’al Shem Tov told them that the plague could be thwarted through two means: Speaking words of Torah, specifically Tehillim, and writing a Sefer Torah.

Immediately the inhabitants of the town undertook the project, and the Ba’al Shem Tov instructed his own sofer, R’ Tzvi, to begin the first two parchments. As soon as the writing was started, the sick began to make miraculous recoveries, and the Sefer Torah became known as “the miracle Sefer Torah.”

Taking the story as a lesson, as the Rebbe so often encouraged, various initiatives have sprung up since the onset of the current pandemic- from a renewed emphasis on the Rebbe’s Ois B’Seifer Torah campaign, to the recent high-profile completion of a Sefer Torah written in merit of those affected by the virus.

Aside from national campaigns, however, many Shluchim are beginning to consider a Sefer Torah Campaign in their own Chabad Houses. At a time when so many people remain confined to their homes, some completely alone, Shluchim have found it more important than ever to inspire their communities with a tangible sense of belonging and oneness.

For Rabbi Shlomo and Nechama Rothstein at Chabad of Vanderbilt in Nashville, Tennessee, this difficulty was all too real. As campus Shluchim during the onset of the crisis, they were faced with the challenge of uniting a scattered community of students, alumni, and parents, many of whom were hurting personally as well as financially.

“People had lost loved ones,” Rabbi Rothstein recalls. “People were scared. We wanted to do something concrete, something that could bring the community together around a common goal, while also helping keep our supporters and friends involved even with the university closed down. When the idea of writing a Sefer Torah came up, we realized right away that it was just what we needed.”

Across the country at Chabad of NW Seattle, Rabbi Yoni and Mushkie Levitin  were arriving at a similar conclusion. For residents of their Seattle suburb, in-person events were out of the question, cancelling their monthly Shabbos minyan. To make matters worse, the ill-timed pandemic had struck just as their long dreamed-of plans to acquire their own Sefer Torah had seemed to finally be getting off the ground. Eventually, however, the couple had a change of perspective.

“We began to realize that, on the contrary, it would be a very opportune time to start this campaign,” relates Rabbi Levitin. “A Torah of unity and healing- for the community, by the community, with everyone participating by purchasing a letter, or dedicating a parshah.”

For both Shluchim, the enthusiastic response to the proposal was almost immediate. A short while later, each reached out to Rabbi Yitzchak Raskin of Machon Stam, and began the process of putting together their communities’ own Hashchalas Sefer Torah.

Given the impossibility of an in-person event, of course, the haschala would have to be held over Zoom. While the idea of a virtual event might sound unusual, this wasn’t Rabbi Raskin’s first long-distance haschala, or even his second. “Recently, many Shluchim have been reaching out to do Zoom Sefer Torah projects,” he explains. By now, the virtual haschala routine has been tested and tried.

As the participants watch, Rabbi Raskin gives a short introduction on the special importance of a Sefer Torah, explaining the kavana of kedushas Sefer Torah that must be kept in mind while writing every letter and the exacting halachic requirements for the preparation of the klaf. The camera then follows him as he meticulously puts quill to ink and crafts the first few words of Bereishis, demonstrating the specific form of each letter and explaining the significance behind it as he goes.

Aside from the time-tested routine, though, every Shliach tailors their individual event to what they feel will have the most impact in their community. In the case of Chabad of Vanderbilt, Rabbi Rothstein found a unique way to involve his entire community.

“Everyone had a chance to come on camera and share a blessing, or a wish,” Rabbi Raskin recalls of that particular event. “For a refuah sheleima for a loved one who was sick, for healing in the world… it was very unifying, very uplifting to see the entire community get involved in this new beginning.”

Several hours away at the Rohr Chabad Center at George Washington University, Rabbi Yudi Steiner sees his community’s own haschalas Sefer Torah as a new beginning in more ways than one.

“The idea is to complete the Torah in time for the university’s reopening after the summer,” he explains. “The fact that Corona has shuttered the school for so long makes this unique event even more inspiring. I feel like all the hopes for renewal and healing are all wrapped up in this new Torah, and our sponsors couldn’t agree more.”

Despite this being GWU’s first-ever Haschalas Sefer Torah, Rabbi Steiner found that, in many respects, the virtual conferencing medium introduced new ways for the community to feel involved in the process.

“Everyone watching could literally be up close to the writing, via camera, in a way that you simply can’t do in person,” he recalls. “I think everyone felt very involved and privileged to be in ‘attendance.’”

Rabbi Yanky and Chanshy Majesky of Chabad of North Orlando had a similar experience with their own recent haschala. “People were very touched to be able to see the Torah being written,” he says, “and we all hope to be able to welcome it in person when it’s completed.”