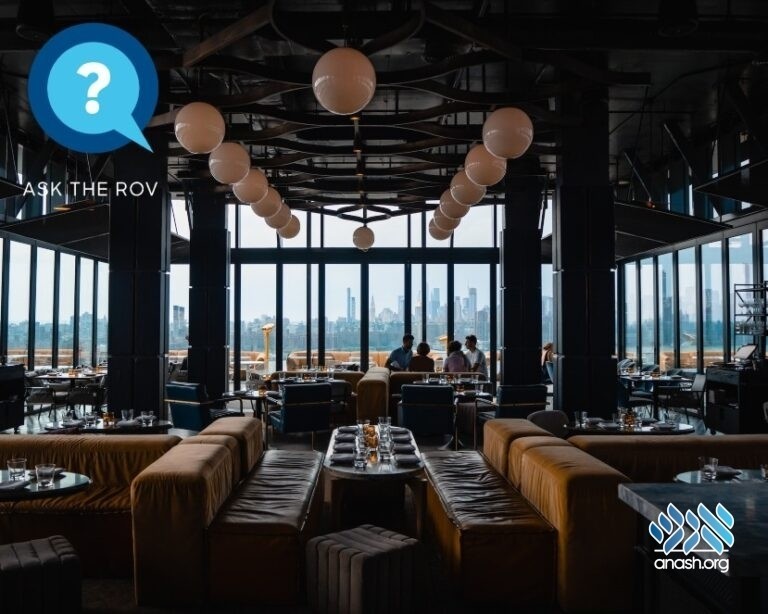 Ask the Rov: May I attend a business meeting in a non-kosher restaurant?

When someone does something that can appear like a forbidden action, even if in truth they aren’t doing anything wrong, there is a concern of maris ayin, “the way it appears to the eye.”1 On several occasions, the Gemara mentions examples that are forbidden due to maris ayin. Poskim debate if this idea extends beyond those specific examples and the majority view is that it does.2

There are two concerns at hand: (1) If the onlooker mistakenly thinks we are doing a forbidden action, he might come to do the aveira himself, thinking that it is allowed;

(2) Even if the onlooker won’t emulate our example, we are instructed against doing anything that will raise suspicion against us, “veh’yisem nekiyim.”

Based on these two concerns, R. Moshe Feinstein prohibits entering the building of a non-frum synagogue that has a kosher minyan in a side room, if the side minyan isn’t widely known. Likewise, one may not sit in a non-kosher eatery, since onlookers may think they can eat there.3

Yet, in a difficult situation, R. Moshe allows purchasing kosher food there in a discreet manner, following the view that maris ayin “in private” doesn’t apply in situations of need or simchas yom tov. In this case, we trust that those inside will see that he’s eating kosher, and if he encounters a Jewish passerby, he must explain that he is very hungry and is therefore allowed to enter to buy kosher food.4

Other contemporary poskim argue that one may be lenient even under regular circumstances since if the eatery has products that are kosher, onlookers won’t think that the eatery’s entire selection is kosher (though a kosher restaurant is still preferable when available).5 Some take this a step further and write that by attending a business meeting in a non-kosher restaurant and abstaining from non-kosher food, he creates a kiddush Hashem.6

If the workplace has designated eateries where business meeting are regularly held, there is further room for leniency since it is known that one is there for the meeting and not to eat.7 If the eatery doesn’t primarily serve non- kosher items — e.g. coffee shop or vegetarian eatery (with various kashrus issues, including bishul akum — there is also less concern, especially if it is maris ayin regarding derabanan prohibitions.

In practice, when needed there is room to be lenient, yet one should consult a rov to take all factors into consideration.