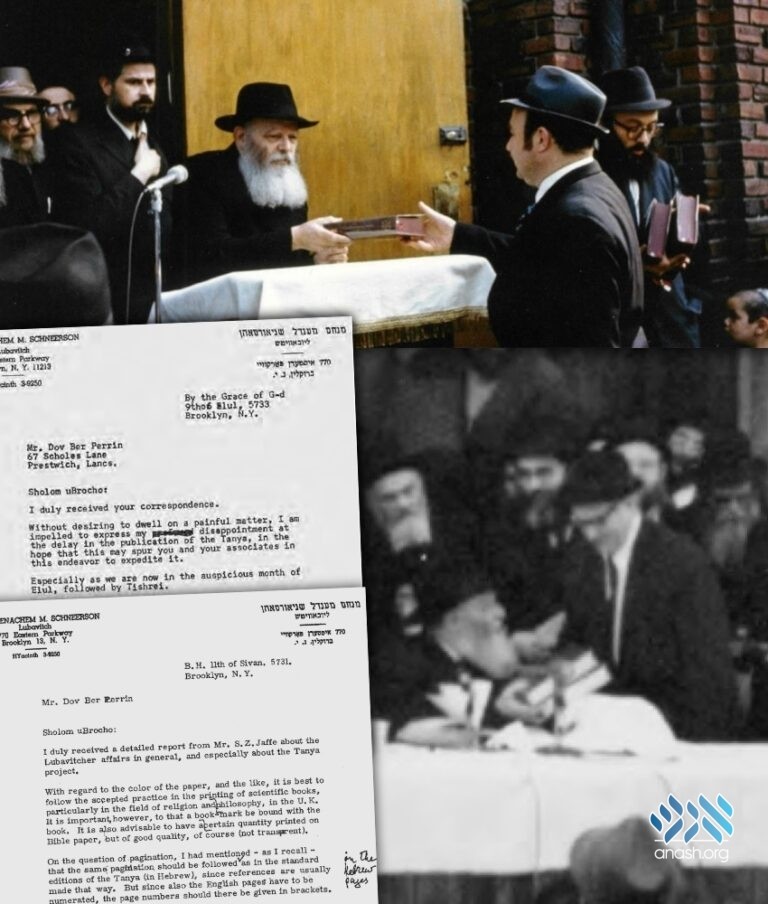 A strong supporter of Chabad in England, Mr. Bernard Perrin merited to have a unique relationship with the Rebbe. This friendship could be seen through the lens of the Rebbe’s English letters written to him and to those close to him.

This article is written in tribute to Mr. Bernard Perrin, a close supporter of Lubavitch in the United Kingdom. Mr. Perrin passed on Friday, the 16th of Tammuz 5782. May his memory be a blessing.

Mr. Perrin shared a close relationship with the Rebbe and supported many projects and institutions of Lubavitch in London and throughout the United Kingdom. The following article serves as a brief summary of this unique relationship as seen through the lens of the Rebbe’s English letters written to him and to those close to him.

Mr. Perrin’s Relationship with the Rebbe

The Perin family had a close relationship with Lubavitch for generations. Mr. Shlomo Perrin, Bernard’s father, was a major supporter of the work of Lubavitch in London and frequently corresponded with the Rebbe.

Shlomo would consult the Rebbe on any major business ventures he set out to take. After visiting the Rebbe, upon his father’s request, Bernard followed suit. The Rebbe’s profound and prophetic business advice helped the Perrins tremendously on numerous occasions.

Living in Manchester Mr. Benard Perrin was often the go-between to communicate important messages from the Rebbe to Mr. Zalmon Jaffe.

In a letter to Zalmon Jaffe the Rebbe writes (letter dated Tu BiShevat, 5729):

No doubt you received my regards from Mr. Dov Ber Perrin coupled with the hope for intensified activities. And though it is nothing new to hear from me such expectations, I trust they will be received in good grace and with resolution to see them materialized, indeed even in a greater measure than hoped for, since yogaato umotzoso is an assured promise.

I am in receipt of your correspondence, in which you mention also about the regards and report which Mr. Dovber Perrin has delivered on his return. I trust that this was in greater detail than appears from your writing. Moreover, I trust that he has also transmitted, at least in a capsule form, the points that were discussed at the Farbrengen, although this was relayed over the long distance telephone, and that he particularly conveyed the points which were discussed during Shabbos, which were not, of course, relayed by telephone. Furthermore, I hope that all the things were transmitted in the conducive atmosphere of a get-together and Farbrengen, when both the speakers and the audience are in the proper frame of mind.

Mr. Shlomo Perrin was a big supporter of Lubavitch in Manchester and took a major role in assisting them in their great work.

In 5731, Lubavitch of Manchester prepared a concert program, with the legendary Jan Peerce as the star performer. In the brochure printed for the event, there was a page dedicated to the Officers of the Lubavitch Organization of Manchester. The Rebbe was surprised to see that Mr. Perrins’s name had been omitted. In a letter to Mr. Jaffe the Rebbe expresses his disappointment (letter dated 11 Nissan, 5731):

In the order of the pages of the said program, I note that on page four, where the (Honorary) Officers of the Lubavitch Organizations of Manchester are mentioned, the name of Mr. Dovber Perrin is not included among them. This is greatly surprising to me, for I surely do not have to point out to you, who are in the very thick of the Lubavitch affairs in your community, that Mr. Perrin is a devoted and dedicated worker and supporter of Lubavitch in Manchester. Undoubtedly the omission was an oversight. However, inasmuch as this list may serve as a proto-copy for future reproductions, not only in local publications, but also elsewhere, I am calling your attention to it.

Around the year 1970, the Rebbe suggested to Mr. Perrin that he help publish a bi-lingual edition of the Tanya. A bi-lingual edition of Tanya, in any language, had never been printed before. Mr. Zalmon Jaffe had suggested this idea to the Rebbe and the Rebbe thought of it favorably. Mr. Perrin accepted the offer and, upon the Rebbe’s advice, a committee was formed to take charge of this endeavor. The committee consisted of Mr. Zalmon Jaffe, Herschel Gorman, and Rabbi Nachman Sudak.

The project wasn’t an easy one. It took many years to deal with all the technicalities and refine the already existing translation. The Rebbe also requested for the Tanya to be printed by the prominent Soncino publishing house. Throughout the process, the Rebbe was extremely involved down to the minutest detail. This is evident from the letters the Rebbe sent to Mr. Perrin during the process. One letter (dated 11 Sivan, 5731) reads:

I duly received a detailed report from Mr. S.Z. Jaffe about the Lubavitcher affairs in general, and especially about the Tanya project.

With regard to the color of the paper, and the like, it is best to follow the accepted practice in the printing of scientific books, particularly in the field of religion and philosophy, in the U.K. It is important, however, that a book mark be bound with the book. It is also advisable to have a certain quantity printed on Bible paper, but of good quality, of course (not transparent).

On the question of pagination, I had mentioned – as I recall – that the same pagination should be followed as in the standard editions of the Tanya (in Hebrew), since references are usually made that way. But since also the English pages have to be numerated, the page numbers should there[fore] be given in brackets.

I trust you and yours had an inspiring and joyous Yom Tov of Kabbolas Hatorah b’simcho ubipnimiyus.

In another letter, two years later, the Rebbe urges for the completion of this project (9 Elul, 5733):

I duly received your correspondence. Without desiring to dwell on a painful matter, I am impelled to express my disappointment at the delay in the publication of the Tanya, in the hope that this may spur you and your associates in this endeavor to expedite it.

Especially as we are now in the auspicious month of Elul, followed by Tishrei…

With prayerful wishes for a Kesivo vachasimo toivo to you and all yours,

In the summer of 5735, the long-awaited Tanya finally arrived from print.

Before Shavuos 5735, the committee of the Bi-lingual Tanya flew into New York to spend the holiday with the Rebbe. They had with them around seventy copies of the newly printed Tanya, with an additional ten leather-bound copies. During the Farbrengen held on Erev Shavuos, the committee officially presented the Tanyas to the Rebbe. One of the leather-bound Tanya’s had a special inscription for the Rebbe. The Rebbe then spoke about the significance of this edition of the Tanya.

A few days later, on 16 Sivan, the Rebbe held a gathering, at the front door of 770, celebrating this event. The Rebbe spoke for a few minutes and then distributed the newly printed Tanya to those assembled. To the committee members, the Rebbe gave a copy which he himself signed.

A few years later the committee, with a few added members, printed another Bi-lingual Tanya, this time in a smaller edition. The Rebbe sent a letter to the committee (21 Iyar, 5741):

I was delighted to receive the new small edition of the bilingual Tanya. Though, of course, small in size, it has all the good features and also external beauty of its larger predecessor – in keeping with the teaching of our Sages in connection with the verse, “This is my G‑d and I will glorify Him.” This is all the more important since the external Hiddur of the Sefer is conducive to the study and absorption of its contents.

I take exception, however, to the comment, “the project is now completed” – not to imply, G‑d forbid, that the publication part of it is in any way incomplete. But this part is only a prelude to the essential part of the project, namely, to disseminate this sacred Sefer and its central message: to explain and show how the Torah and Mitzvos are “exceedingly near to you, in your mouth, and in your heart to do it” – as the author of the Tanya defines its objective on the very first title page. This task – to see to it that the Sefer and its message reach every Jew, man and woman, since both are included in the above definition – is only its beginning.

I wish each and everyone of you much Hatzlocho in working towards the achievement of the said task. The present days of Sefirah and preparation for Kabbolas haTorah with joy and inwardness is particularly propitious to go from strength to strength in the said direction.

With esteem and blessing,

View more (English) letters from the Rebbe on the subject of the bi-lingual Tanya.

This compilation was made by the ‘Rebbe Responsa’ editors. The Rebbe Responsa app is a revolutionary platform, giving access to the Rebbe’s letters written originally in English, featuring them in an organized, interactive, and intriguing fashion. Please share with us your feedback, or letters from the Rebbe at [email protected]. Download the Rebbe Responsa app at: rebberesponsa.com.