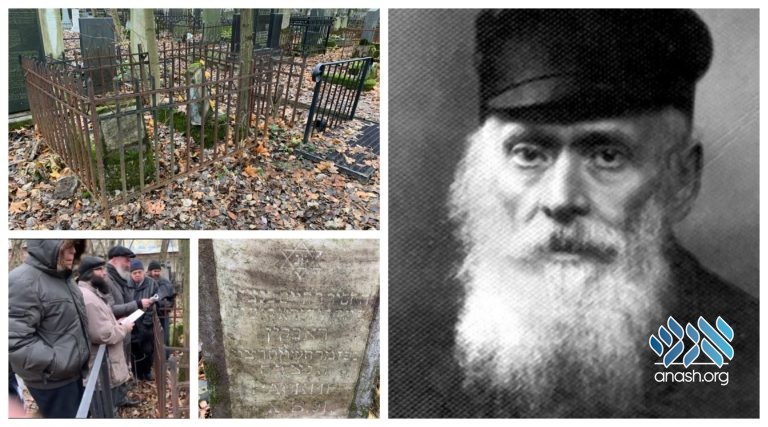 It’s been 81 years since Reb Chaim Bentzion Raskin passed away, and now, finally, in the days surrounding the yahrtzeit, his many descendants can once again come and daven at this resting place.

He passed away on 7 Cheshvan, 5699/1938, physically broken but emotionally and spiritually sound, and was brought to kever Yisroel that day in Leningrad. He had been suffering from yene machla of the stomach, and in the final days could not eat at all. His family went east when the Nazis were close to Leningrad but were afraid to go to his kever before they left. The location was since forgotten. Until now.

He was buried near his friend, the chossid Reb Zalman Zichlin, who passed away a few years earlier, and whose matzeivah is featured here as well. The family name of this Reb Zalman was somewhat of a mystery, as time had taken its toll on the headstone, but Reb Yakov Raskin, Reb Chaim Bentzion’s son, had written about Reb Zalman and his name was confirmed as Zichlin.

Reb Chaim Bentzion was a Chassidisher melamed who had mesiras nefesh for chinuch of Yiddishe kinder and made it his life’s work. The Frierdiker Rebbe made mention in a sicha of the fact that “near Moscow lives a yid who gets up at four o’clock in the morning to learn, but not before he pours his heart out saying Tehillim. Why does he cry? he cries so that the Eybershter will have rachmonus and his children and grandchildren will follow the true Torah path.”

He was talking about Reb Chaim Bentzion Raskin.

Shliach Rabbi Levi Mondshein of Smolensk, who is descended from Reb Chaim Bentzion through his son Reb Yakov Yosef organized a minyan to say kaddish and daven at the resting place.