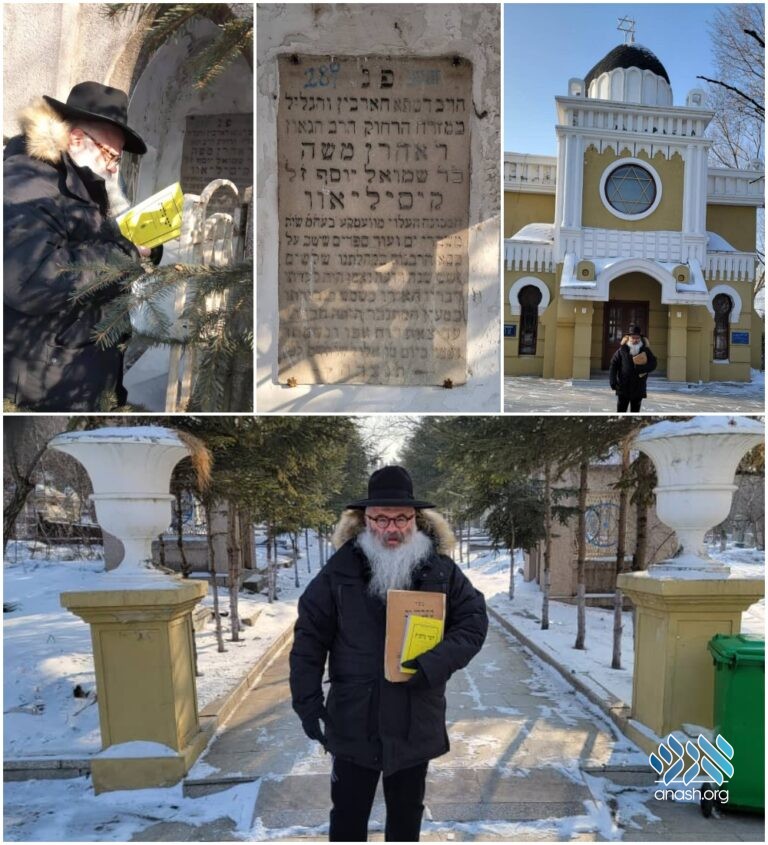 During a visit to the ancient Jewish cemetery of Harbin, China, Beijing Shliach Rabbi Shimon Freundlich paid tribute to the long and nearly-forgotten Jewish history of China, with a visit to the grave of the city’s chief rabbi.

Today was a very meaningful, emotional, uplifting and inspiring day.

Allow me to explain:

When my wife Dini and I arrived in Beijing 20 years ago, we heard of the only remaining Jewish cemetery, located in Harbin, China. It was then that I decided to visit the cemetery at least once a year and say a chapter of Tehillim at each one of the 480 gravestones which can be identified today.

Background of the Jewish cemetery in Harbin, China

The construction of the cemetery commenced in 1903. It was originally located at a different site and in the 1920’s it had to be expanded and was relocated to a site which is now the site of the Ice Sports Center of Heilongjiang Province. In 1958, the Chinese authorities decided to move the Jewish Cemetery to the Public Cemetery (since 1991 named Huang Shan Public Cemetery) located on the outskirts of Harbin city.

From approximately 3000 graves, of which 1200 have tombstones, 853 were selected and transferred to this site. On December 31, 1963, the Jewish community stopped functioning. Since that date, 23 graves were added to this location, bringing a total of 876 graves to the site. Only 480 gravestones can be identified today.

Why I visit each year

In addition, this is a way for me to show hakoras hatov to each and every one of the individuals buried there.

The Chinese people and the Government have the utmost respect for the Jewish community that these Jews built back in the day, to the extent that 17 years ago they flew me down to Harbin to guide them on the “do’s and don’ts” of renovating the area surrounding a Jewish cemetery. They also built a beautiful replica of the Synagogue which once stood at the old Jewish cemetery, in addition to renovating the most magnificent synagogue in the center of town, which served as the central synagogue for the Harbin Jewish community of yesteryear.

Today when I meet with government officials they are proud to say that they were a safe haven for close on 30,000 Jews in Harbin from 1899 – 1963 when the last Jew passed away. Hearing the way they talk about them tells me that the Jews of Harbin made such a tremendous Kiddush Hashem that it’s been remembered for generations. The Jewish community of China today benefits from the way they conducted themselves and the impression they made. I therefore go every year to each grave and recite a chapter in Tehillim to say thank you.

Buried in the cemetery is the Chief Rabbi of Harbin (the Av Beis Din), Rabbi Aaron Moshe Haleivi Kisilov a”h. A separate enclosure was built for his kever. Opposite his enclosure is an identical one of another Rabbi of the Harbin Jewish community but unfortunately the gravestone isn’t legible.

Rabbi Kisilov was born in Surazh, Chernigov district. In his youth, he excelled in his studies, and was known as the “Vietker Illui”. He later studied in Minsk, and in Volozhin under the tutelage of Rabbi Chaim Soloveitchik. He was the rabbi of Barysaw from 1900 to 1913. In 1913, he was appointed chief rabbi of Harbin, and tasked with overseeing Jewish cultural, educational, and social activities.

In December 1937, at the first annual Far Eastern Jewish Conference, he was declared ‘Chief Rabbi of the Far East’. As leader of the Harbin chapter of Agudas Chasidei Chabad, Kiselov assisted many wartime Jewish refugees who had fled German-occupied Europe.

Interestingly he served as a Rabbi in Harbin for 36 years and wrote a book [one of many] on Jewish law containing 36 Halachic responses. I have an original and took it along with me. I read the front cover, the introduction to the book, the synopses of all 36 responses which is printed at the back of the book, as well as learned one of the 36 subjects, in addition to saying some Tehillim.

I feel humble and blessed by this opportunity and thankful beyond words to the Chinese government for persevering and upkeeping the Jewish cemetery in the most dignified, respectful, sensitive and understanding manner.

It was an incredible, emotional and moving experience. I have also started to create a database of all the legible gravestones and have someone say kaddish on the yortzeits.

P.S. The pictures are from today, January 6th 2022. For those of you who know me, I rarely ever wear a coat. My wife went out and bought me one for this occasion because she said [and I quote], “You cannot be outside in short sleeves when it is – 29°C!”