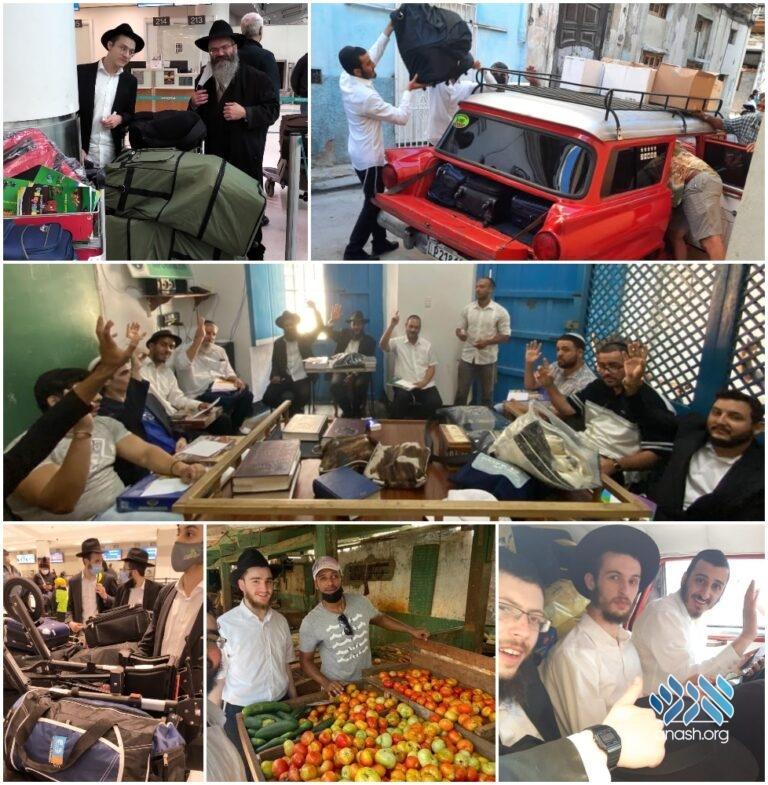 Lubavitcher bochurim were dispatched to Cuba before and during Pesach to bring the Yom Tov to every Yid scattered throughout the country, which remains under the longest trade embargo in modern history.

Lubavitcher bochurim were dispatched to Cuba before and during Pesach to bring the Yom Tov to every Yid scattered throughout the country, which remains under the longest trade embargo in modern history.

The bochurim were sent out by Chabad Friends of Cuban Jewry – CFCJ, headed by Rabbi Shimon Aisenbach, who has been sending Merkos Shluchim and Judaica supplies to the Yidden of Cuba for many years.

Starting before Pesach, the bochurim spend a combined three and a half weeks on the island country. The first group, comprised of Levi Broner , Moshe Elberg, and Shneur Mochkin, began circulating the country prior to Pesach, delivering handmade shmurah matzah, wine, kosher l’pesach foods and Spanish-translated Haggados and Pesach guides to Yidden living in Havana, as well as those scattered throughout remote areas.

“Their mandate was to provide every Jew on the entire island with all their necessary Pesach needs, ensuring that our less fortunate brethren living in these remote areas should have the ability to celebrate the Yom Tov with dignity and joy,” Rabbi Aisenbach said.

For the Shabbos prior to Yud Alef Nissan, the group traveled to Saniago de Cuba, a city in the far east of the country,  Where in addition to the local Jewish community there are about a minyan whom partake in CFCJ’s Kolel – Kolel Menajem.  The shluchim spending the full Shabbos with them, davening, learning, and farbrengen. For the community and for the bochurim, it was a Shabbos to remember.  As Rabbi Elberg noted “you can’t imagine what a Shabbos this was like”.

Immediately afterwards, joined by their friends, Menachem Gansburg and Sholom Rivkin, the bochurim began intense preparations for the multiple public sedorim organized by CFJC, including two public sedorim in the capital city of Havana. The first night seder took place at a rented hall that was filled to capacity, and the second night at the Kolel facility.

Following the first days of Pesach, the bochurim returned to the USA, and two more bochurim, Menachem Gansburg and Menachem Greisman, traveled to Cuba to celebrate the final days of Yom Tov with the community, culminating with a grand Seudas Moshaich.

“The Israelis were all extremely moved and impressed by the Seder, hardly believing that there was a Chabad presence in the difficult conditions of Cuba and amazed by the beautiful seder, with matzah and wine, singing and dancing. All of the Israelis expressed their gratitude and appreciation to us for providing this experience, and one of them remarked to me as he left “this was a night I will never forget”.

“Also the local Jews thoroughly enjoyed the Seder, and one of them explained to me that he saw this as a ray of hope, a beginning of a new era for Cuban Jewry. He said there had never been such a large or beautiful Pesach event, and that news of this seder were reaching people who now discovered that there is indeed a Jewish presence in Cuba,” he said.

“Baruch Hashem the shluchim were very successful in their multiple missions; namely placing emphasis that every Jewish home in this 1100km strip would be connected to Pesach, and have the ability to fulfill the important mitzvos associated with the Yom Tov. This is a real fulfilment of the famous messianic prophecies: “Ve-atem Teluktu L’Eachad Echad Beis Yisrael” – “And you, the house of Israel, will be gathered one by one”, noted Rabbi Shimon Aisenbach, Director of CFCJ.