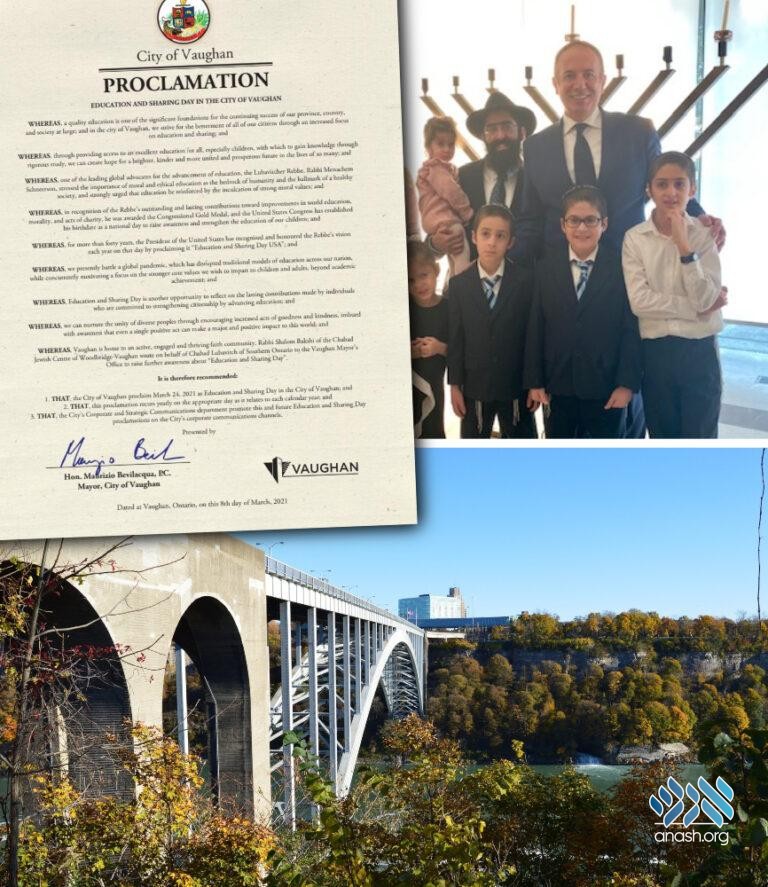 Illustration Photo of the Bakshi Family with the Mayor – Dec. 2020

Although an annual tradition in the USA, Education and Sharing Day has been unheard of in Canada since 1987. Thanks to the efforts of Rabbi Sholom Ber Bakshi, Shliach to Woodbridge, that has changed this year.

“Education & Sharing Day” has been unheard of in Canada since 1987. Until this year, that is.

Across the border in the USA, proclaiming Yud Alef Nissan as Education Day is an annual tradition. For more than 40 years, presidents, houses of congress, and governments have recognized the date corresponding to the Rebbe’s birthday on the Jewish calendar as Education and Sharing Day. In Canada, however, the last time this took place was in 1987 when the head shluchim from around the country met Prime Minister Brian Mulroney.

To mark the occasion, the city will be holding a virtual meeting beginning of next week with the Mayor & city council discussing the influence of the Rebbe & Chabad on the entire city and residents.

In addition, great effort is being made to bring Education Day to the provincial and federal government. Details will be IYH released soon.

The shluchim will be presenting the Mayor, City Council, dignitaries & leaders of the province – with the book “Toward a Meaningful Life,” which brings out the teaching of the Rebbe in a way that can be understood by anyone.

“Thanks to the Rebbe’s brachos, we were successful in accomplishing this great mivtzah. We are sure it will give the Rebbe much nachas ruach,” said Rabbi Bakshi. “We’d like to thank our head Shliach Rabbi Zalman Aharon Grossbaum, who supported us in this project and has always stood behind us since we began our shlichus to Woodbridge & Kleinburg Ontario in Kislev 5780. A number of other local shluchim also supported this endeavor, and a thank you goes to them as well.”

Rabbi Bakshi also thanks the ChabadOne PR team for providing the resources and support to assist shluchim around the world fulfill this initiative.

For more information on the Chabad Jewish Centre of Woodbridge, please visit www.Jewishwoodbridge.ca