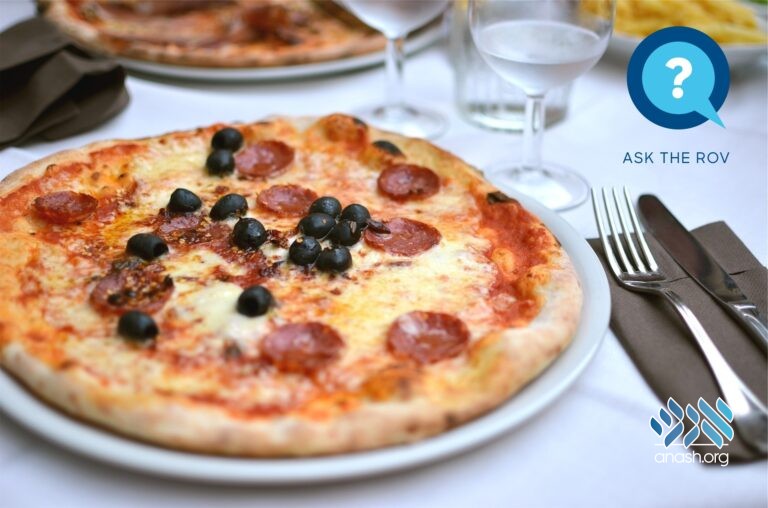 Ask the Rov: Some very popular pizza variants use salami and other meats as toppings. Is it permissible to eat pizza with an imitation meat topping or is there an issue of Maris Ayin?

Chazal decreed that certain activities which appear similar to prohibitions must be avoided so onlookers won’t come to permit the actual prohibition. For example, fish blood is permitted, but one may not drink it on its own unless fish scales are noticeable with it (heker). Likewise, Shulchan Aruch rules that one may not cook meat in human milk.

Thus, Rema writes that when cooking animal meat with almond milk, one should make a heker by placing almonds nearby. Some poskim, however, disagree with this application. Fish blood is in fact ‘blood’ and human milk is ‘milk’ – albeit a permissible kind – and is therefore subject to maris ayin. Almond milk, however, just appears similar – as red wine can look like blood – and this halacha isn’t concerned about mere appearances. Others add further that people are accustomed to almond milk and they won’t think it’s milk, unlike the problematic foods which are uncommon.

Even according to Rema, the concern applies only when the activity could be mistaken for a issur d’oraisa, and since chicken with milk is midrabanan, one may cook chicken in almond milk without a heker. Yet, some achronim hold the concern for maris ayis exists by rabbinic prohibitions as well. The Taz rules that the halacha follows the Rema, though one should be stringent when possible.

When imitation pareve items are very widespread, such as coffee whitener or pareve ice cream, all agree that there is no concern. This classification adjusts over time, as we find in halacha that silk with wool was originally prohibited as appearing to be shaatnez, but later became permitted once silk became more common. Still, some suggest leaving the container on the table as an extra precaution. Practically, one should be extra careful in front of people who don’t know and may come to err, or when eating in a public place.

In conclusion, when using a relatively new type of food, one should ideally see if people know about it being pareve and otherwise place a heker.