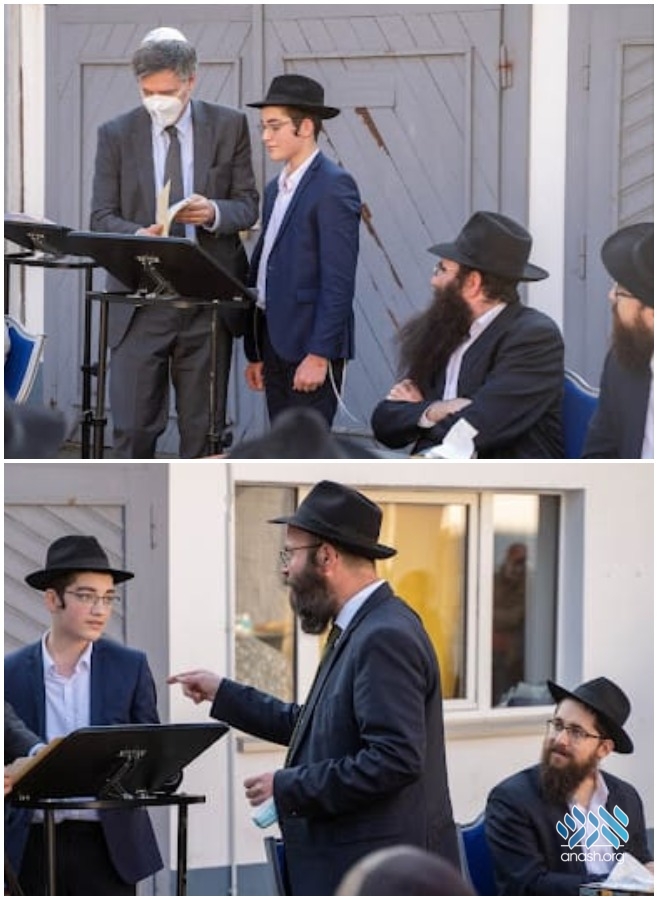 At a special ceremony, the Mayor of Düsseldorf, Germany, welcomed the yeshiva of Dnipro, Ukraine, which has relocated there, and presented some old documents which were of special importance to one of the bochurim.

Anti-Semitism was on the rise in Germany. A year into Hitler’s reign, the footsteps of the Holocaust were fast approaching. Laws curbing Jewish freedom were enacted, and a year into the regime, in 1934, Jews were barred from civil service and limited in public schools and universities. Jewish actors were forbidden from performing. In the Saxony region, Jews were banned from slaughtering animals in a kosher way, making Jewish life increasingly difficult.

Incidents of violence against Jews were becoming more frequent and more severe. In Dusseldorf, Marcus David Weiss, a member of the city’s observant community, received a vicious punch to his face by Nazi thugs. Seeing the foreboding signs of what was coming, Weiss took his family to Israel, or what was then Mandatory Palestine. Safe from the Nazi predation in Europe, the Weiss family grew.

This crisis recalls the converse, where during World War I, under the false pretense that Jews living near Russia’s borders with Austria, Poland and Lithuania were German collaborators, Czar Nicholas II banished them from their homes. With just 24-hours advance notice, thousands of Jews were forced to flee deeper into Russia. Many stayed in Dnipro, then Yekaterinoslav, where the Rebbe was growing up. His father, Rabbi Levi Yitzchak Schneerson, served as the city’s chief rabbi and turned his home into the focal point for the relief effort. The Rebbe and his brothers served many hot meals to the weary refugees, under the guidance of their mother, Rebbetzin Chana Schneerson.

On her 20th yahrtzeit (anniversary of her passing) on 20 Av, 1984, the Rebbe recalled his mother’s tireless efforts in a public address. Noting that his mother served as the head of various aid committees in the city, the Rebbe went back in time to his childhood in the early 20th century: “I observed something astounding: I had never before seen such a passionate preoccupation, such determination for a cause, both day and night. Her dedication was so conspicuous that although my preoccupation was in cheder rather than at home, it is etched in my memory for all the days of my life.”

While refugees were then fleeing east to Dnipro, today the Jewish community of Dnipro flees west. After a long journey, the students and their teachers reunited in Dusseldorf, where they are being housed at Chabad of Dusseldorf, directed by Rabbi Chaim and Dvora Barkan.

Fifteen-year-old Mordechai Dovid Schneersohn, whose parents, Rabbi Shneor and Rachel Schneersohn, co-direct Chabad of Rovna (Rivne) in Western Ukraine, is among the students in Dusseldorf.

He has returned to the hometown of his namesake, Marcus David Weiss, his mother’s grandfather. The city that had once shunned his family had come full circle.

On March 23, the mayor of Düsseldorf, Stephan Keller, accompanied by Dr. Bastian Fleermann, the city’s historian, who’s studied the Jewish community extensively, visited the yeshivah in exile. Barkan thanked the mayor for the city’s willingness to absorb the yeshivah, along with many other refugees.

Keller presented Schneersohn with the original documents from the city’s archives, detailing his family history.

“I’m still processing what happened,” Schneersohn’s grandmother, Slava Reinitz, the daughter of Marcus David Weiss, tells Chabad.org from Lod, Israel. “It is very emotional for me. During my father’s lifetime, we didn’t research the family’s roots too much, and much of this information is new to me.”

For example, she says, she now knows that her father wasn’t born in Düsseldorf, but a neighboring village. “Knowing more about the lives of my grandfather and grandmother—who I am named after—is very meaningful to me.”