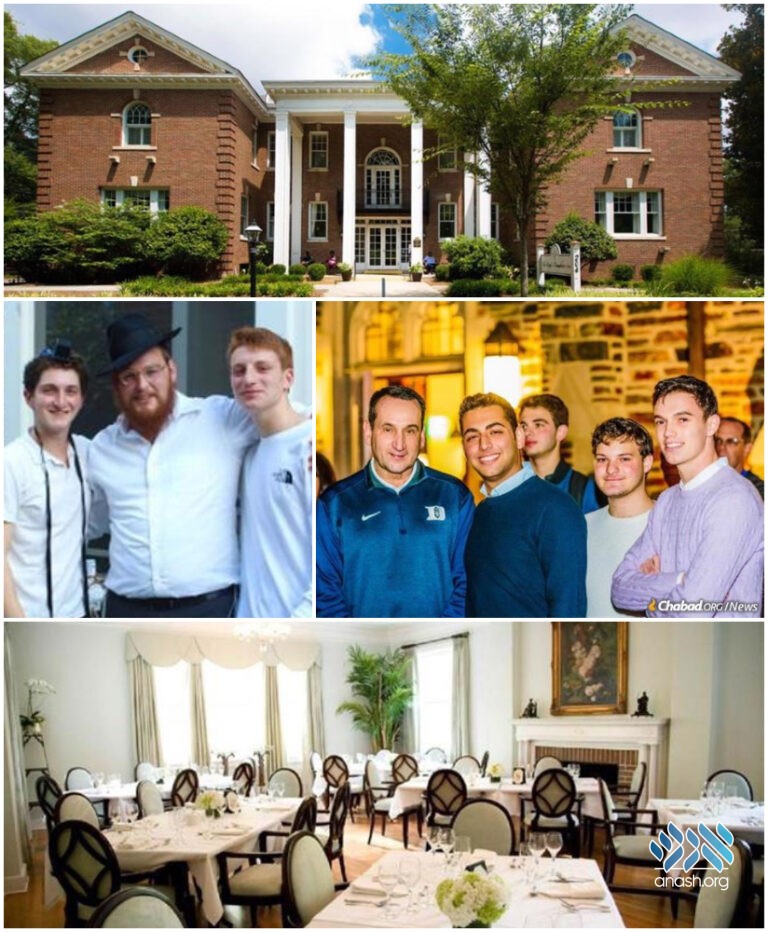 A 24,000 square foot building in Durham, North Carolina, which was formerly the “King’s Daughters Inn”, has been transformed into a Chabad student center by shluchim Rabbi Nossen and Chaya Fellig.

As Duke University celebrates commencement festivities and bids farewell to their 2021 graduates, there is additional cause for celebration among its Jewish students. They can now look forward to greeting incoming students this fall for a new year of Jewish programs, classes and services at Fleishman House, a charming and expansive new presence centrally located alongside Duke’s East Campus in Durham, N.C.

The historic brick Colonial Revival building, formerly the King’s Daughters Inn, has been renamed Fleishman House in honor of beloved Jewish professor Joel Fleishman, and serves as the new home of Rohr Chabad at Duke University Undergrads. Jewish life at Duke has undergone a revitalization in the six years since Chabad Duke Undergrads co-directors Rabbi Nossen and Chaya Fellig arrived on campus, and its new 24,000-square-foot home, which features a beautiful rooftop deck, commercial kitchen, dining room, classrooms and plenty of space for student lounges, will ensure the work of welcoming and catering to Jewish students regardless of level of observance and knowledge continues to thrive.

For Duke alumnus Larry Heyman (’94), dedicating a large Jewish center one block from the East Campus is a longtime dream; that it bears Professor Fleishman’s name is an honor.

“When I attended Duke in the early 1990s, Jewish students didn’t have many formal opportunities to congregate and practice their faith,” Heyman tells Chabad.org. “For myself and my Jewish peers, Professor Fleishman was the face of Jewish life at the school. He would invite us over for the High Holidays and the Passover seder. At college, and away from home for the first meaningful amount of time, the gravitational pull of competing priorities was strong. Joel’s hospitality and graciousness pulled us into his orbit for Jewish observances throughout the year.”

A native of Fayetteville, N.C., Fleishman and his distinguished career have long been intertwined with the destiny of his home state. Early on, he worked as a legal assistant to North Carolina Gov. Terry Sanford, who in 1969 became president of Duke University. Among Sanford’s early initiatives was founding a school at Duke dedicated to preparing students for lives of leadership, civic engagement and public service, and he recruited Fleishman from Yale to come to Duke to serve as the first director of what is now the Sanford School of Public Policy. Fleishman is currently professor of law and public policy at Duke; director of the Heyman Center on Ethics, Public Policy and the Professions; and director of the Duke Foundation Research Program. He has also authored three books on philanthropy.

A Big Dream and a Fitting Tribute

The relationship Heyman formed with Fleishman as a student at Duke in the ’90s did not end when he graduated. In the years since, they bonded over their shared interests in history and philanthropy, and, of course, Jewish life at Duke.

Heyman recalls a phone call he had with Fleishman two years ago, when they discussed further expanding opportunities for Jewish life at the school. Both agreed that providing students with fresh, appealing kosher meals daily was a priority. Easily available kosher food on campus is not only about accommodating students’ needs, but about creating a space where Jewish students can feel at home and comfortable in a familiar setting. That’s when Fleishman told his erstwhile student about some exciting newcomers at Duke: the Felligs of Chabad.

One obvious challenge was space, or the lack of it. After all, the rabbi’s house was a great place to start—the Felligs, who regularly host up to 150 students for Friday-night Shabbat meals, were already busting out of their center—but how many people can you feed out of a residential kitchen?

“When the rabbi told me that a historic hotel, the King’s Daughters Inn, was for sale and that he wanted to purchase it and dedicate it in honor of Joel, I thought this was too good to be true,” says Heyman. “After all Joel has done for Jewish life at Duke over his 50-year career here, being able to continue to serve the needs of the Jewish student population was something very near and dear to him.”

The news has garnered widespread excitement at Duke, both among students and faculty.

Imam Abdullah Antepli, associate professor of the practice at Sanford School of Public Policy, and a longtime friend and colleague of Fleishman’s, describes the new Fleishman House a fitting accolade.

“What a well-deserving tribute to honor the legendary Joel Fleishman of Duke!,” he says. “So many spaces, centers, initiatives and programs already are, and many more will be, named after this giant, but this one will always be standing out as one of the most special since it perfectly captures this true American hero’s deep connection to his Jewish faith, his unshakable commitment to the ethical and moral teachings of Judaism, and his unlimited love and service to his students, Duke and to all humanity.”

“I know how much this honor will mean to Joel,” she says. “During his many years of service to Duke, what stands out is his deep care about the well-being of our students on all dimensions.”

The work of turning Fleishman House from a vision into a reality involved a host of dedicated and generous supporters who share an admiration for Fleishman and a commitment to Jewish community. “A lot of credit goes to Sara Bloom for galvanizing such a successful fundraising effort so quickly,” adds Heyman. “Without her, this would not have been possible.”

With both alumni and involved parents on board, the property was purchased in February 2021 and began operating immediately. With the coronavirus pandemic making outdoor space an especially important commodity, Chabad has already put good mileage onto Fleishman House’s 2,100-square-foot rooftop deck.

Josh Berman (’23) is excited about the new developments at Chabad. A junior majoring in public policy at Duke, he also serves as president at Chabad at Duke Undergrad. “When I got here as a freshman two-and-a-half years ago, there were maybe 20 to 30 students who would attend Shabbat dinners at the rabbi’s house,” he describes. “But over the years, at least until the pandemic settled in, we had grown to nearly 100 students each week. Such numbers were really unheard of at Duke, and we were just busting out of that space.”

Among the features at Fleishman House are 17 guest rooms on the second floor, which are available for both visiting parents and students who want to stay over on Shabbat.

“Chabad at Duke is really on fire,” continues Berman. “It has really become the cool place to go. With a huge rooftop and so many other key services like a place to sleep for Shabbat and regular kosher meals throughout the week, it’s going to be incredible.”

Though the rabbi credits the students with the growth, Berman insists that the rabbi and his wife’s energy and dedication are the secret to their success. “Rabbi Nossen and Chaya probably won’t want me to say this, but I insist that they deserve so much credit.”

“They are a true inspiration,” agrees Rabbi Zalman Bluming, who, together with his wife, Yehudis, established Chabad in the Durham/Chapel Hill region in 2002. “Their devotion and care for the Duke undergrad students is legendary. We are honored to have them work with us.”

As for the Felligs, they are exuberant about their work and the prospects ahead. The rabbi sees a place open to Jewish students 24/7—a home away from home in the truest sense. “In our old space, things were getting so cramped that there were times when my wife or I had to take our kids to the park so that the other one could give a class. That’s no longer an issue. Fleishman House is big enough that we can be here for students, and they can also just come here at any time to study or lounge. It’s really the perfect spot for us.”

Before its time as a hotel, the King’s Daughters Inn served for nearly a century as a home for elderly single women. Located on land donated by Brodie Duke—all three Duke brothers contributed to the cost of its 1926 expansion—it served the entire community. A century later, the historic structure is doing that once again.

“I’m confident that under the stewardship of Rabbi Fellig, the facility will be optimized to its potential and put to great use for the Jewish students at Duke University and the entire community,” said Heyman. “And for a man with as big a heart as Professor Joel Fleishman, nothing less would suffice.”

The dedication and ribbon-cutting ceremony for the Rohr Chabad Center and Fleishman House will be held in the fall. All are invited.