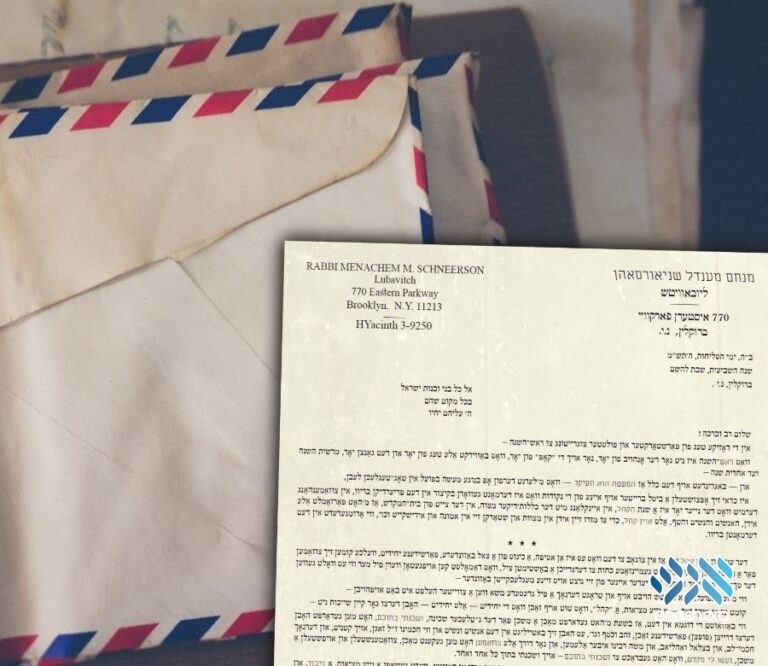 Every year, the Rebbe would issue a michtav kloli before Rosh Hashana, addressing the theme of the upcoming year.

In the letter sent out on in the “Days of Selichos,” 5740, the Rebbe wrote about the significance of the upcoming Hakhel year. Read the letter here, or download and print to learn over Yom Tov.

To the Sons and Daughters of our
People Israel, Everywhere,

G‑d bless you all!

And bearing in mind the basic principle that “action is the important thing,” namely, the moral lesson that has to be derived and translated into action in the everyday life,

It is appropriate to elaborate on one of the points that has been mentioned only briefly in the previous letter, in connection with the new year being a year of Hakhel, recalling the comprehensive Mitzvah, in the time of the Beis Hamikdosh, of assembling all the Jews, the men, women, and children, as one Kohol (congregation), for the purpose of stimulating them in the observance of Mitzvos, and strengthening their faith and Yiddishkeit, etc., as discussed in the said letter.

The significance of the term one Kohol, which characterizes this assemblage is that in addition to having the quality of an assembly of a number of distinct and different individuals who are assembled together for a certain purpose, in order to achieve a certain goal with concerted efforts, which makes it possible to accomplish a great deal more than could be accomplished by all of them acting independently —

As we see from experience that a person can lift and carry a much larger load when another person helps him lift it. —

There comes into being an essentially new entity, a “Kohol,” which can accomplish things that could not be done by the individuals, as individuals —

As can be seen from the example of the Mishkon (Sanctuary): When the time came to make a Sanctuary for the Shechinah (Divine Presence), in accordance with G‑d’s directive, “Make Me a Mikdosh (holy place), and I will dwell among them,” it called for contributions of thirteen (fifteen) items, such as gold, silver, etc., donated by men, women, and, according to our Sages, also children; which were handed over to the “wise-hearted men,” who were to make the various parts of the Mishkon under the direction of Betzalel and Oholiov; with Moshe Rabbeinu over them all. And only through all of them together was it possible to make, construct and erect a Mishkon, a fitting abode (Mikdosh) for G‑d’s Presence, which caused the extension of G‑d’s dwelling also “in them — within the heart of each of them.”

In a similar way it is with the “Small Sanctuary” (Mikdosh me’at), the synagogue: When ten Jews come together to pray, a new entity — a tzibbur (“congregation”) — is created; and only then can the Divine precept, “I shall be hallowed in the midst of the children of Israel,” through the recitation of kaddish, borchu, kedushah, etc. be fulfilled, and — it effects a change in every one of the congregation in that one becomes a part of a “sacred congregation.”

So it is in connection with Hakhel: It had to be carried out “When all Israel come… (then) read this Torah before all Israel… (in a manner of) hakhel — assemble the people, the men, and the women, and the children” — which made them all into one Kohol, and they listened to the Torah “as… if they heard it from G‑d,” “as on the day when it was given at Sinai,” when “Israel encamped there facing the mountain — Like one person, with one heart.”

As mentioned in the previous letter, even though the Mitzvah of Hakhel, in its concrete form, is connected with the Beis Hamikdosh, nevertheless its spiritual content is relevant in all places and at all times. It is particularly emphasized, however, each year at this time, when on the Shabbos before Rosh-Hashanah the Torah reading is always from the Sedra “You are standing this day, all of you… your heads, … to the drawer of your water.”

On this occasion, too, all Jews stand together — from their highest (“heads”) to the lowest in rank (“water-carrier”) — and all are united with G‑d by an everlasting covenant; yet not only as individuals, but in a manner of “all of you” — when all the individuals become one. In this way a new dimension is added to each of the ten categories comprising the Jewish People (as enumerated in the verse) — each of them becoming a part of one entity, the Jewish People. And on “this day” (alluding to Rosh-Hashanah) all Jews stand united by one and the same thought — to “crown” the Almighty, and by one and the same inner prayer — that He accept the coronation and reveal Himself as “King of Israel” and (also as) “King of All the Earth.”

What has been said above pertains to Rosh-Hashanah of every year. This year there is the added emphasis of it being Rosh-Hashanah of a Year of Hakhel, in which the unification of all Jews as one Kohol is especially emphasized, as explained above. Moreover, it comes after the prelude of the year of Shemittah, “a Shabbos unto G‑d,” when, during the entire year, all Jews were involved in the experience of unity and oneness, in a tangible and impressive manner:

Every owner of a field and vineyard (in the time of the Beis Hamikdosh agriculture was the principle occupation — “every man under his vine and under his figtree”) renounced his private land ownership, and surrendered it to the real Owner, Who declared, “the earth is Mine,” and then places all the fields and vineyards at the disposal of all alike. This is why the Shemittah year is the proper and fitting prelude to Hakhel, and both together set the foundation for all the things that have to be accomplished in the everyday life through all the years ahead.

To cite at least one concrete example in the spirit of what has been said above: When a few Jews live in a remote small town, they must not rest content in being observant themselves, as individuals, however adequate their Torah learning, and however excellent their performance of Mitzvos. They must pool their capacities for a concerted effort to create a Kohol, set up a Kohol-Yiddishkeit, with institutions for Torah education; a Torah-leader (Rabbi), Torah kosher food service (Shochet, butcher), and, of course, Torah-true family life (Mikveh), and so on.

May G‑d grant that inasmuch as we are coming from the Torah reading this past Shabbos-Selichos: “You are standing this day, all of you” and “Hakhel the people, the men, and the women, and the children” — everyone should take along with him (her) the abovementioned points in order to implement them in actual practice each and every day of the year,

And the Almighty, “Who hears the sound of teruah (Shofar) of His people Israel in mercy,” should bless all our people, and everyone in particular, to be able to fulfill the Mitzvos of Shemittah and Hakhel not merely in their spiritual content, but in actual concrete form and detail, with the true and complete Geulo through Moshiach Tzidkeinu, with the “return of a great Kohol hither,” in the Beis Hamikdosh that will rise on its site; and may all this be very soon, in our own days, indeed, and,

While realizing even now, in the last days of the Golus: “We are Your people and flock of Your pasture, we will thank You for ever; we will tell Your praise to generation and generation.”

With esteem and with redoubled blessing for a Kesivo Vachasimo Toivo for a Good and Sweet Year, and for Hatzlocho in all above,

Both spiritually and materially,