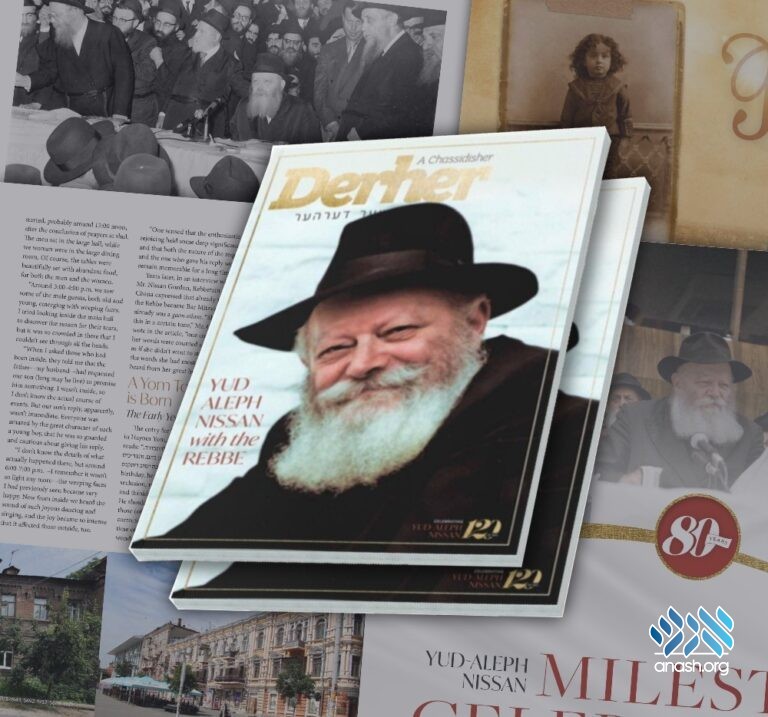 A Chassidisher Derher produced a special Yud-Aleph Nissan magazine on top of the upcoming Nissan issue, to inject a fresh chayus into the hachanos for this special day.

120 years is monumental. And a wealth of new initiatives, mosdos, hachanos and hachlatos are underway.

But what about us as individuals? How are we readying for our Rebbe’s eminent day?

Every year Yud-Aleph Nissan is special. It is the day when the great light of the Rebbe began to illuminate the world, and every year this great light shines brighter than the year before. It is a day when every Chossid celebrates and truly feels “ashreinu ma tov chelkeinu,” the exclusive zechus we have, being a part of the Rebbe’s generation- dor hashvi’i.

The number 120 is even more important than an ordinary milestone: 120 is a number of perfection; it was at the age of 120 when the deepest secrets of the Torah were revealed to Moshe Rabbeinu; the Torah teaches that the number of 120 has a unique power to annul negative decrees; and so much more.

When such a milestone approaches—the 120th birthday of our Rebbe, the nossi of our generation—each of these unique achievements takes on a real and practical meaning.

It is on this day that the Rebbe empowers and uplifts the entire generation – in this colossal 120 manner-to complete the avodah placed upon us, to prepare the world for the imminent arrival of Moshiach.

What is perhaps unique to the yom tov of Yud Aleph Nissan, is the way Chassidim prepare for the day: Aside from the traditional hachanos, Yud-Aleph Nissan is seen as a day when a Chossid presents the Rebbe with a matana, a gift.

Fascinatingly, these matanos were not only acknowledged by the Rebbe, but he gave these matanos special attention, at times even describing a matana he would appreciate.

In this spirit, A Chassidisher Derher presents an extra magazine that will be shipped with the upcoming Nissan Derher.

This new magazine was originally made as three special magazines called באורו נלך. They were distributed to all Lubavitcher yeshivos as a global hachona for Yud-Aleph Nissan.

Reading about the way Yud-Aleph Nissan was celebrated in years past, in the Rebbe’s physical presence -both the preparations of Chassidim for this special day, and the way the Rebbe responded, infusing the Chassidim with unmatched kochos -will undoubtedly inject a fresh chayus into the hachanos for this special day.

PLUS Included is a beautiful, wallet-sized card of the Rebbe and Rebbetzin’s Kapitelach.

Click here to order your double package before stocks run out.