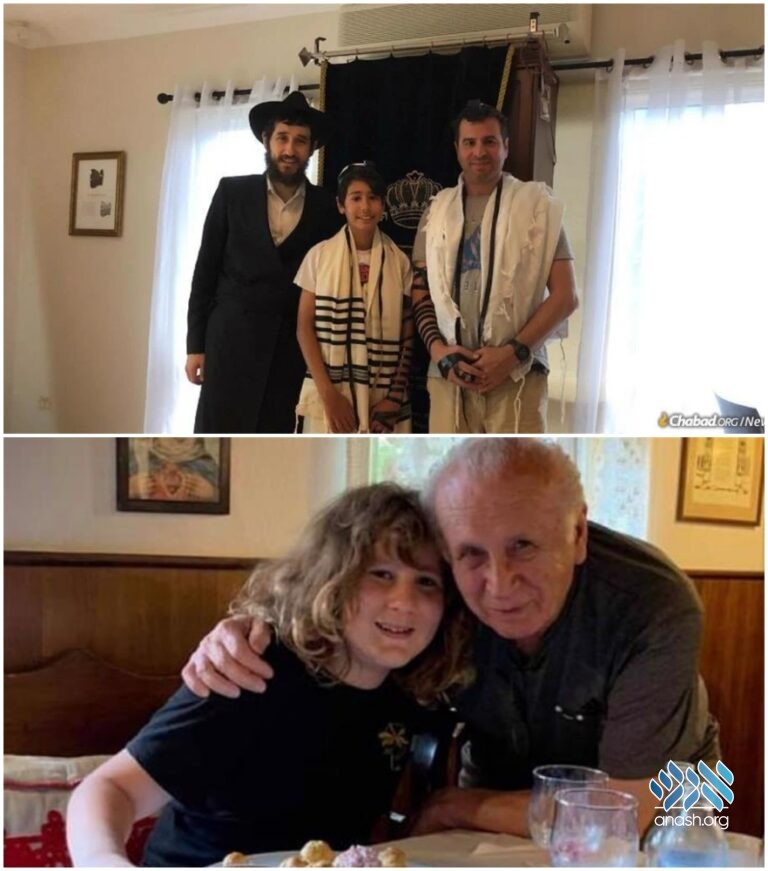 After Australia’s draconian covid restrictions prevented two boys from celebrating their bar mitzvahs as planned, Shliach Rabbi Ari Rubin and the local Jewish community came together to give them the celebration they wouldn’t forget.

Daniel Azoulay is among a handful of Jewish kids living in a radius of hundreds of miles of his hometown of Townsville, Australia, and his parents, Eyal and Anat, wanted to give him a memorable bar mitzvah. The planning began well before his 13th birthday: Daniel would study over Zoom with Rabbi Ari Rubin, co-director of Chabad of Northern Queensland, based more than 200 miles away in the coastal town of Cairns. The bar mitzvah celebration would be held in Israel with their extended family, and the Torah-reading would take place at none other than the Western Wall in Jerusalem.

Benjamin Sarnyai, the only other Jewish kid at Daniel’s school, was also studying with Rubin. His bar mitzvah was going to be in Townsville, just as his older brother’s was in 2018, when it was the first-ever bar mitzvah in the coastal town, a gateway to the Great Barrier Reef.

The rabbi and his wife, Mushkie, would frequently travel to Townsville and engage with the 100 or so Jews living there without any other Jewish infrastructure. “Before Covid,” Rubin tells Chabad.org, “I would travel twice monthly to Townsville to teach Torah classes.”

Occasionally, the Rubins’ three children would join their parents for the five-hour drive, and the family would host a Shabbat dinner for the Townsville community. But in the backdrop of the pandemic, the classes moved to Zoom, and the Shabbat dinners were put on hold.

The visits were sorely missed by the Azoulays. They have been living in Townsville for six years, where Eyal works as a civil engineer and Anat as a nurse. Transplants from Israel—and, in fact, the only Israeli family in town—they knew it would be difficult to give their son the same Jewish experiences they had growing up. “In Israel or Melbourne [the largest center of Jewish life in Australia], you can surround yourself with Judaism,” explains Eyal, “but here, you don’t really feel the chagim [‘Jewish holidays’].” For Daniel to absorb Jewish culture and tradition, “it’s whatever we provide and when Rabbi Ari comes here,” he adds.

“We were thrilled for him to start his Jewish journey. We wanted him to understand his origins, where we come from,” and it doesn’t end at 13, notes Eyal, “The plan is to continue studying. We’re keen.” The rabbi was a good teacher, says Daniel, adding that “it was pretty easy to learn, we studied every Monday and Thursday.”

‘Being the Only Jew Is an Interesting Experience’

Benjamin enjoyed the classes, too. Before these lessons with Rubin, he had “very little education about Judaism,” he notes. “It was interesting; I learned lots of new things about bar mitzvah and Judaism as a whole. I learned about the beginnings of Judaism with Abraham and how he went against the rest of society—and was hated for it,” something that young Benjamin can relate to, being the only Jewish kid in his class. “I have experienced some bullying,” he acknowledges, “but many people are respectful.”

Even considering the bullying, he adds that “being the only Jew is an interesting experience.”

Benjamin’s parents, Zoltan and Katie Sarnyai, who are originally from Hungary, say that through the lockdowns and restrictions, Chabad has been there for them. “[Rubin] did everything, absolutely everything, in his power to take advantage of modern technology to run Torah classes and bar mitzvah classes.”

The Azoulays’ Israel celebration was canceled due to Australia’s international border closure, so together, the Rubins, Sarnyais and Azoulays planned a joint celebration in Townsville after a year of study with the rabbi.

“We drove almost five hours to Townsville, back in June,” says Rubin. “Shabbat day we held a community-wide celebration, and the boys gave the speeches they prepared with lessons from the parshah,and tributes to their grandparents and families.” Daniel and Benjamin each took on a mitzvah in honor of their big day.

“My bar mitzvah was an incredible experience,” enthuses Benjamin. “I’d never done anything like that in my life.” He says he was a little nervous, but at the same time, “excited to get up and say the prayers and my speech.”

At the prayer service, Benjamin led the prayers while Daniel read the Torah. “They both did an outstanding job,” Rubin says with pride. “It was very inspiring to see these boys who worked so hard to bring Judaism into their lives with no prior formal Jewish education. They’re so proud of their heritage and where they come from.”

“Now that I’m officially a Jewish adult,” Benjamin remarks, “I hope to continue expanding my knowledge of Judaism with Rabbi Ari and further embrace it as part of my life.”

Once everyone had gone home, Benjamin had the chance to reflect on his once-in-a-lifetime experience, saying, “I was very proud of myself and felt like I had just become a new person.”