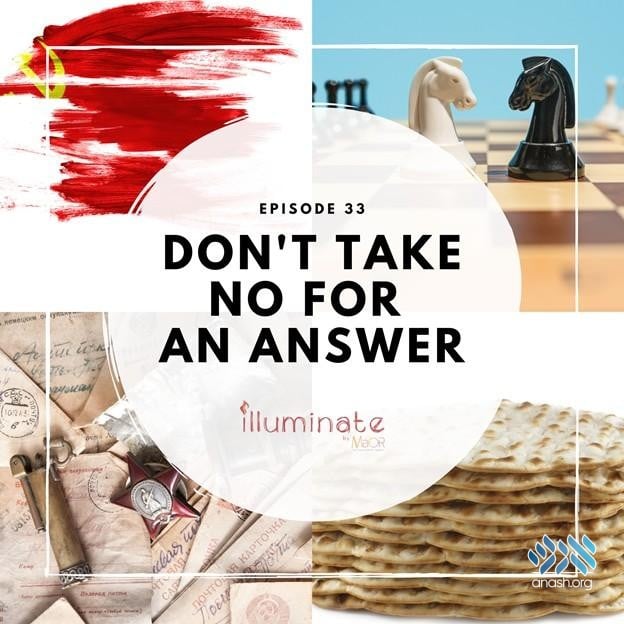 Watch: How do we respond to that crippling inner voice, the self-imposed limits on acting in line with our values? A Pesach story about the Rebbe’s father on standing strong in the face of opposition.

How do we respond to that crippling inner voice, the self-imposed limits on acting in line with our values?

Considered the “breadbasket” of the Soviet Union, the wheat fields surrounding the Communist ruled city of Dnepropetrovsk supplied grain to all of Russia. By 1939, the government controlled all markets in the Soviet Union, including the flour mills and matzah bakeries.

The government requested that the Rebbe’s father, R’ Levik, give his stamp of approval on their government-produced flour. They knew that without his certification approval, their flour would not sell for the matzah production. Yet, uncertified matzahs would not meet the kosher standards for Pesach.

R’ Levik sent a letter to the authorities, demanding that they give him full jurisdiction over the matzah baking.Otherwise, he would not endorse their product. R’ Levik also declared his plans to publicize that their matzah production was unsupervised.The authorities responded with threats that his “sabotage” would not go unpunished.

R’ Levik remained firm. He refused to cooperate with something that would be contrary to the principles of the Torah. He made a trip to Moscow to meet Soviet President Kalinin and amazingly, he was victorious.

The average individual does not need to confront a powerful government, but we do experience an inner struggle day after day. Our animal soul tries time and time again to prevent us from acting in line with who we truly are as Jews.

Following the example of R’ Levik, we have the power to turn a firm “No” into a “yes.”

Yes, I will stand strong and do whatever it takes to serve my Creator a bit better today.

Illuminate by Maor offers powerful presentations of the Rebbe’s timeless talks, fused with engaging narration and explanation. These weekly videos are bite-sized and simple to grasp, designed for learners of all levels.