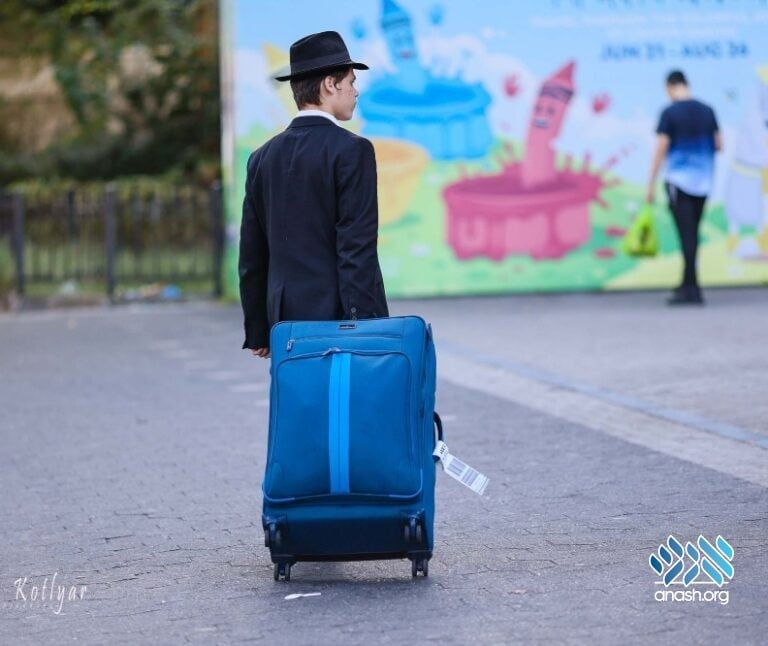 Article by Rabbi Shimon Posner: Considering sending your child to yeshiva? Think again. Or rather, don’t send them. So I learned from my grandfather, the esteemed Lubavitcher chosid, Rabbi Shlomo Aron Kazarnovsky, whose yahrzeit is today.

7 Cheshvan is the yahrzeit of Reb Shlomo Aron Kazarnovsky. In honor of his yahrzeit, we are reprinting an article was penned several years ago, but is still as relevant as ever.

Considering sending your child to yeshiva? Think again. Or rather, don’t send them. So I learned from my grandfather, the esteemed Lubavitcher chosid, Rabbi Shlomo Aron Kazarnovsky. He planted this seed in my head over 30 years ago, on a walk down Nashville’s stately West End Avenue going home from my father’s shul to my parent’s home at the corner of Whitland and Leonard.

He was a young boy, twelve or thirteen living in Mogilev, (Mogilev Guberna he called it, and when I would repeat that name to Russian immigrants in the ensuing decades, they would laugh because the Communists got rid of the Czarist-era appellation of Guberna) his father was a Chabad’ske chosid who wanted his son to learn in Volozin, (so I remember him telling me, but my now-deceased uncle insisted that was impossible because Volozin was no longer a yeshiva at that time. No matter.)

One Friday there was big news in Mogilev; two Temimim had arrived. These were real, live talmidim of the famed almost other-worldly yeshiva of Lubavitch, and these larger-than-life young men would be spending the entire Shabbos in Mogilev.

My grandfather told me (while resting at the bus- stop bench at the corner of Craighead, I just googled it: the bench is still there) that he entire Shabbos he did not take his eyes off the temimim, he was mesmerized by their presence and studied their every nuance. Not a word was exchanged: he was way too in awe to approach them.

Sunday morning, in shul after davening, he was at the other end of the shul when the tomim caught his eye, turned towards him, and strode right over to the young child. “Ich zeh az du bist a yiras shomayim,” I see that you are a reverent young man, “tommer du vilst oisvaksin a mensh, zolst du forin in Lubavitch”. If you want to grow up to be a mensch, you must travel to Lubavitch.

The young Shlomo Aron was too stunned to speak. He ran home and told his mother of the epiphany. His mother thought for a short while. “Kum,” she announced, “mir forin in Lubavitch.” Come we are going to Lubavitch. And without telling her husband a word, she hired a wagon and driver, and off she went with her son to Lubavitch.

There is a verb in English with an interesting etymology: to stump. It hails back to the days of unpaved paths cut through dense forests. As trees were cut the roots were not always removed, and the result was a tree stump that served as an inverted pothole. Sometimes it would stop the wagon wheel in its tracks—hence the verb stump—and oftentimes it would catch the wheel and upturn the wagon, which it did this time. Shlomo Aron‘s mother Shifra (her maiden name was Elkonen, I believe) was blessed with the very Russian virtue of ample girth and the Russian highways were blessed with ample blottes, potholes that filled with rain and become thick mud. The wagon got stumped and Shifra got catapulted from the wagon into the blotte. Shlomo Aron grabbed hold of her and tried to tug her out and up.

“Oy!” she exclaimed,” are you sure this Lubavitch trip was such a good idea?” she asked only half-jokingly. And her little sons retorted, “besser di blotte fun Lubavitch vi di bank fun Volozin.” Better the blotte of Lubavitch than the benches (the seating of choice) of Volozhin. And with these words of resolve, the young chosid was born.

They arrived in Lubavitch where the Menahel, the principal (we know him as the Frierdiker Rebbe) promptly informed them that the zman, the term, had already begun and that they do not entertain the notion of admitting a new talmid until the next zman. Come back later, was the dismissal.

“I don’t care what,” Shlomo Aron told his mother, “I am NOT going back to Mogilev!”

There was a custom then, that visitors to Lubavitch paid their respects to the Bubbe Rebbetzin, the grande dame—tzadeikis, widow of the Rebbe Maharash, mother of the then-present Rebbe (Rashab), and grandmother of the then-Menahel. It is gripping to see the reverence with which the Frierdiker Rebbe wrote of his grandmother.

Shifra and her son entered to the Bubbe Rebbetzin’s audience. What is your name, asked the Rebbetzin. Kazarnovky, she replied, and the accent as my grandfather told the story was on the zar syllable, not the nov.

“Velche Kazarnovsky?” the Bubbe Rebbetzin asked with a slight startle in her voice, which Kazarnovky, and Shifra told her. “Zets zach aveck ich’ll aich dertzeilin de yichis.” Sit down and I will tell you your yichus, your lineage, and told them that they descend from the Mitteler Rebbe.

“So what brings you to Lubavitch?” she asked.

“My son would like to go the Yeshiva, but the Menahel informed us that he cannot be accepted at this time.”

The Bubbe Rebbetzin thought for moment; “Zolst zich ibernechten doh in Lubavitch.” Spend the night here in Lubavitch. The next day young Shlomo Aron got an urgent message; report to the Menahel.

“You’ve been accepted,“ the Frierdiker Rebbe told him, “report to Seder tomorrow morning.” He and his mother went to see the Rebbetzin. (It was not clear to me if she had summoned them.)

“Zolst du vissen, you should know that you were accepted in yeshiva thanks to me, but I only got you in on a tnai, on a condition: from now on you must come make Kiddush for me every Shabbos morning after davening.”

“And every Shabbos until she passed away,” said my grandfather, “she heard Kiddush from me.”

Years passed. The Frierdiker Rebbe was now Rebbe and the Communists were doing their thing and the now-married father with two young ones and a pregnant wife had gotten papers to go to freedom: America. Shlomo Aron was from the lucky ones, he had family in America who could help him.

He went into yechidus and began crying.

“Why are you crying?” asked the Rebbe.

“I don’t know when I will see you again,” cried the anguished chosid.

“Nonsense!” said the Rebbe; not to worry, was his brocho. “And now,” continued the Rebbe,” let me tell you the story behind your coming to Lubavitch.”

“That evening my grandmother called my father (the Rebbe Rashab, her son) and told him he must accept you, and it is on her acharayis: her responsibility. He, in turn, called me and reiterated his mother’s demand.”

Years passed. Rabbi Kazarnovky was instrumental in getting the Frierdiker Rebbe out of Soviet Russia, and then later out of occupied Poland and shortly thereafter, the purchase of 770 and shortly after that, bringing the Rebbe and Rebbetzin to America from occupied France.

The Frierdiker Rebbe told his son-in-law to farbreng every Shabbos Mevorchim. And at one Shabbos Mevorchim, when the Frierdiker Rebbe was still alive, the Rebbe told this story and ended off with the words, “Not only did we lose nothing from this, but we have gained from it also”. A startling and understated compliment from a Rebbe. So ends the story my grandfather told me that Yom Tov walk back to my parents’ home, and he told me that was his thank you for always walking him, in Nashville, Bensonhurst, and Crown Heights.

What would have happed if Shifra would not have accompanied her son to Lubavitch? We cannot know. But we do know that her being there made all the difference between her son having a positive experience in yeshiva or a different one.

So don’t send your child to yeshiva. . . BRING your child to yeshiva! For out-of-towners especially, if it means two tickets instead of one, it is well worth the price. Think how differently the teachers, principals, dorm counselors, people they are staying with, and people in the community will look at your child than if he or she pulls up by themselves?

Maybe you will see an old friend from your younger days and connect them with your child, affording them one more place where they can feel enough at home to stretch out on the couch and maybe, just maybe, kick off their shoes. Think how much more secure your child will feel having you at their side during that fateful transition. It’s a big inconvenience, but not as big an inconvenience as not doing it.

And in-towners too, bring your daughter or son to the first day of school, drop them off for assembly, say hello (and thank you?) to the teachers and principal. See who else is in her class and when she gets home, be there to ask her their names, and see whom she likes and near whom she is sitting.

You want to know when is the right age to send your kids away from home to yeshiva?

Be there when they unpack their suitcase. Make their bed, go out to the grocery and stock them up with their favorites, even if you have a sister-in-law there who is offering to do it. Send their cookies to arrive within one day after they get here. (Restock often.) And unpack their socks. How can you expect your child will succeed in yeshiva if you don’t’ know where their sock drawer is?