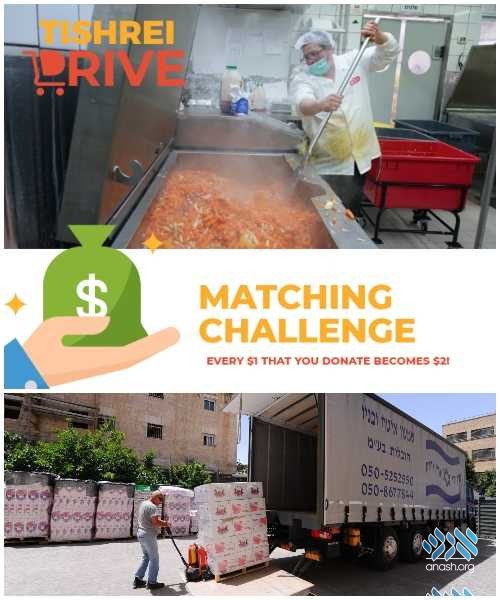 With hundreds of thousands finding themselves in need for the first time in their lives, Colel Chabad took upon itself to feed as many people as possible. Now an anonymous matcher has stepped forward to match every single donation until the Tishrei Drive reaches its goal.

The Yomim Tovim of Tishrei are halfway done.

And It has been the busiest Tishrei that Colel Chabad has ever seen.

With tens of thousands confined to their homes and hundreds of thousands who found themselves in need for the first time in their lives. Colel Chabad took a massive project upon themselves, to feed as many people as they were able to throughout the month of Tishrei.

Thousands of tons of dry food, supplies, and warm meals were distributed throughout Israel to needy, ill and elderly individuals.

Now, Colel Chabad needs to cover the expense of this tremendous undertaking.

An anonymous donor has stepped up and offered to match every single donation until we reach our goal!