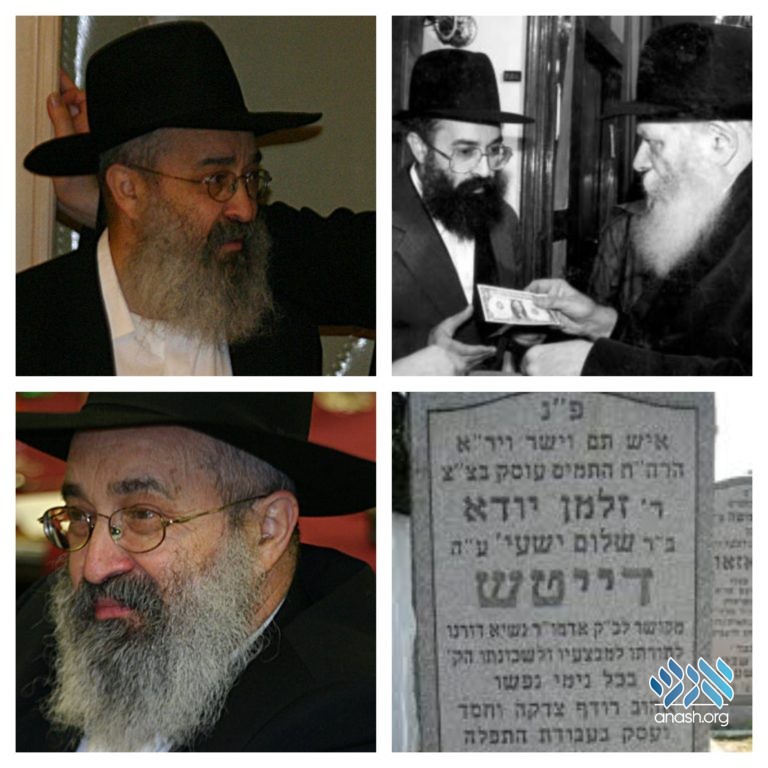 The “quintessential dor hashvii Chassidisher balabos,” is what comes to mind when speaking of Reb Zalman Deitsch, who passed away on this day in 5766/2006. It was the Rebbe who sent Reb Zalman into business. He wasn’t a mashpia or shliach or a Rosh Yeshiva, just a “regular guy” who made sure to live his life by the Rebbe’s directives, be connected to the Rebbe through learning his Torah and supporting his mosdos, and raise his kids that way as well.

As a bachur Zalman was filled with a love of learning Torah, chassidishe hanhogos and nigunim, and of course, a deep connection to the Rebbe. He traveled to Montreal to learn in yeshiva there. When he returned to New York to learn in 770, he was one of the outstanding bachurim in the study of Chassidus and was chosen to be one of the seven “kanim” (the name given to seven chosen bachurim who said deep pilpulim for the talmidim of the yeshiva on Friday night) in Chassidus. At one yechidus that R’ Zalman had with the Rebbe at this time, the Rebbe told him to focus on avodas hatefilla. He was diligent about fulfilling this hora’ah and even after he married and became a businessman, he davened slowly and with great kavana and on Shabbos he was utterly devoted to avodas hatefilla.

After his engagement to Ms. Cyrel Edelman, daughter of the shluchim to Springfield, MA, his father R’ Sholom Yeshaya went over to the Rebbe at a farbrengen and gave the Rebbe a bottle of mashke while announcing the shidduch, saying, “It’s all the Rebbe’s z’chus!” The Rebbe replied: For a shidduch you need to pay. Two months later, before the wedding, R’ Zalman’s father passed away. A short while later, when his mother had a yechidus, she mentioned what the Rebbe said to her husband and asked what the Rebbe meant by it and what he wanted of her husband before he passed away. The Rebbe said: I wanted him to strengthen his emuna and bitachon. These words, emuna, and bitachon, became R’ Zalman’s motto in everything in life.

After his father passed away the Rebbe suggested to Zalman that he take over his father’s business but encouraged him as well to continue to devote himself to avodas hatfilah.

Many Jews are successful in business and contribute tzedaka, but for R’ Zalman, the business was a means for him to fulfill the Rebbe’s ratzon. He considered each dollar in profit to be another dollar to benefit the Rebbe’s mosdos and to support the Rebbe’s takanos. One of his children said during shiva that until he was 18 he didn’t know what his father did for a living since he never spoke about business matters at home.

Another point that shows R’ Zalman’s order of priorities is the fact that despite his business dealings he did not take any of his capable sons into the business, but made sure they all went on shlichus. In 5732/1972, the Rebbe’s 70th birthday, when the Rebbe asked for 71 new mosdos, R’ Zalman started a Chabad house in Amherst, MA. He bought a building and for many years he paid the salary of the shliach so the shliach could devote all his time to outreach activities.

When there was a need for a new mikva, R’ Zalman built one at his own expense. At that time, when the Rebbe said to buy buildings in Crown Heights, R’ Zalman invested a lot of money in purchasing buildings. He saw it as the Rebbe’s work and went beyond his means to do so. In later years, when the buildings he bought became embroiled in legal entanglements and some people wanted to proffer compromises, R’ Zalman insisted that he would not sign to a compromise until the other side signed a document stating that the Rebbe is the true owner of the community and its development had to be done in accordance with the Rebbe’s wishes. He was ready to absorb financial losses as long as it was clear that the community belonged to the Rebbe.

R’ Zalman viewed his home as a place that was meant to give the Rebbe nachas. His home was open to guests and his wife Cyrel שתחי’ה greeted them all graciously. People knew that you could show up day or night. There were guests who stayed for weeks and they always felt comfortable coming back again. R’ Zalman and his wife ran their home as the Rebbe said – as a Beis Chabad. This was the feeling their guests had. His home was the scene for farbrengens on many occasions, and on Sukkos everybody knew that you could show up any time to his sukkah and you’d find a Chassidishe farbrengen, with mashpiim and all sorts of material and spiritual delights.

Whenever the Rebbe announced a new takana, R’ Zalman would invite askonim to his home and together they would figure out how to carry out the Rebbe’s wishes. In one of the Rebbe’s letters to R’ Zalman, the Rebbe added in his own handwriting, “osek b’tzarchei tzibbur, etc.”

When a Melaveh Malka was held in his home for mosdos Chadrei Torah Ohr in Eretz Yisroel, and the organizer of the Melaveh Malka announced this to the Rebbe at the Shabbos farbrenegn and gave a bottle of mashke, as was customary, the Rebbe called for R’ Zalman and poured him a l’chaim. Then the Rebbe gave the bottle back to the organizer. This was unusual and testified to the Rebbe’s fondness for R’ Zalman, who devoted his home to the Rebbe’s inyanim. Similarly, with the takana to learn Rambam, R’ Zalman and his siblings continue to support activities promoting the campaign to learn Rambam.

So too, when the Rebbe called for the establishment of kollelim Tiferes Zekeinim, he threw himself energetically into establishing and even giving shiurim in the kollelim. When the Rebbe asked that Tanyas be printed in every location, R’ Zalman saw to the printing of a Tanya in Nigeria while there on business and also hired a young man and a car to travel around the US, printing hundreds of editions. As a member of the Crown Heights community, R’ Zalman was known as a person of charity and kindness who helped many families in need.

Besides the generous amounts of tzedaka he disbursed, he often signed as a guarantor for loans for people who needed a financial boost to provide for themselves. Even when he knew that the person had no chance of repaying, he would sign, and there were times that he ended up paying off the loan, but he never tried to collect from the needy borrower. He never spoke to others about his charitable deeds, even his closest family. Only during the Shiva did they manage to discover a small amount of his private generosity, through hearing from some of the recipients.

Due to his great hiskashrus to the Rebbe, he set aside each month a significant sum of money for “ma’amad.” Additionally, those who helped out in the Rebbe’s home knew that if any repairs needed to be done or any appliance or furnishing needed buying, they could turn to R’ Zalman, and immediately receive the entire sum. In recent years, he experienced much pleasure from the thousands of guests that came to 770 for Tishrei, who could be seen sitting and learning the teachings of the Rebbe assiduously.

Even in later times, when his business encountered financial difficulties, he refused to downsize his contributions to the Rebbe’s mosdos, and at one point took a large bank loan offering some of his business assets as collateral, in order to make sizable contributions of hundreds of thousands of dollars to various mosdos of the Rebbe.

In his final days, he continued his communal work, and on Thursday before he passed away, he attended the board meeting of Oholei Torah. On Shabbos Mattos-Massei, he was taken to the hospital, and he passed away on Monday, 29 Tammuz.

After his passing his life story was published in the form of “Vayehi Ish Matzliach.“

Adapted from Rabbi Michoel Seligson and other sources.