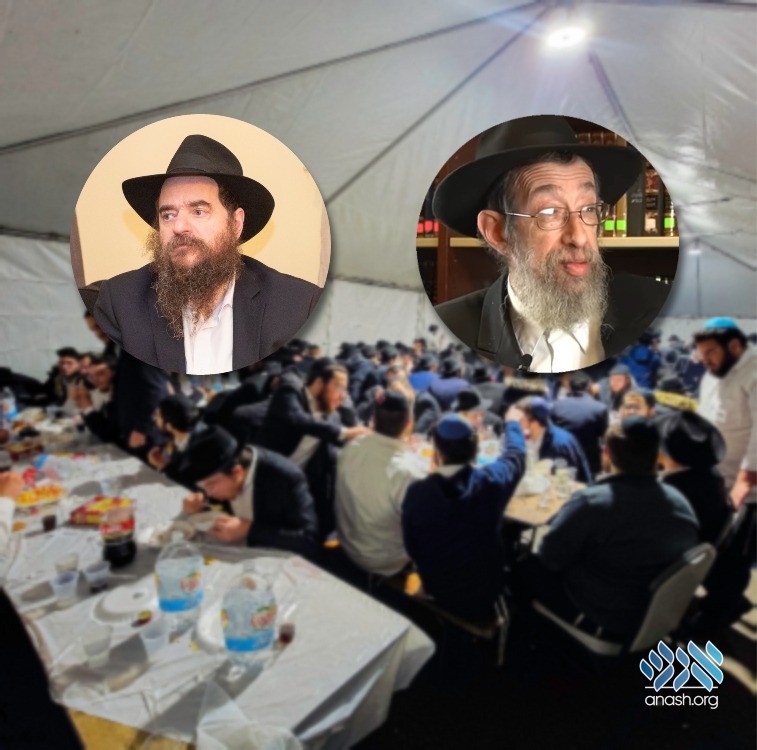 Article by Rabbi Chaim Chazan: At a late night farbrengen at the Ohel, I observed a heated debate between Rabbi Yossel Gourarie and Rabbi Gedalya Shemtov on dedication to the Rebbe and personal growth.

Years ago, I participated in a memorable farbrengen at the Ohel. Deep into the farbrengen, after the vodka bottles had been virtually emptied, a spirited exchange of ideas took place between Rabbi Yossel Gurary of Detroit and Rabbi Gedalya Shemtov, director of the Shluchim Office.

Rabbi Shemtov had insinuated to the bochurim in attendance, that more important than their learning nigleh and Chassidus, and development in avodas Hashem is their dedication to becoming the Rebbe‘s soldiers. A person can only spend years on self-development by possessing an inner drive to succeed. When you are motivated by your own inner drive, it will be much harder for you to then let go of your focus on learning and davening and go on shlichus.

Being personally invested in your own agenda has an advantage that you will be more successful but the downside is that it is harder to later forfeit your goals to do what you are needed for. Better put less emphasis on self-development and dedicate yourself to be a simple foot soldier of the Rebbe.

Rabbi Gurary vehemently disagreed. You want to give yourself as a present to the Rebbe. In the times of the Beis Hamikdash one could bring a minchas ashir, a rich man’s offering or a minchas oni, a poor man’s gift. If you don’t learn and work on yourself, who are you? What are you giving to the Rebbe? A useless nothing! It’s a mincha, but a minchas oni.

Real dedication to the Rebbe behooves you to learn Chassidus, work on your character, become a talmid chochom and a chassidishe Yid. Then when you devote yourself to the Rebbe, you are giving a minchas ashir! The level of your dedication is stronger, as you are truly forfeiting your own agenda and preferences. If you have nothing much to give you can’t forfeit much.

A deeper level of dedication is required to put aside your personal spiritual agenda in favor of what the Rebbe has in mind for you, but that is outweighed by the fact that the Rebbe’s objectives will better be attained. You will be someone who the Rebbe can put to work and derive benefit from.

Some of us have a fear that our spiritual interests and agendas will not be aligned with what the Rebbe wants from us, so better squash our personal preferences. The truth is, your metzius is not a contradiction to bittul, because you can and should harness your metzius for the Rebbe’s inyonim. On the contrary, the more you are a metzius and personally invested, the more useful you can be in attaining the Rebbe’s objectives.

The first idea that a person hears about Chassidus’s approach to davening is that tefillah is etymologically related to the word tofel, which means to connect. To study Torah is to understand Hashem’s wisdom. In contrast, the basic purpose of davening is to request one’s needs from Hashem.

One would think that internalizing Hashem’s intellect via learning Torah would connect one more than focusing on one’s own needs. Yet davening, and not Torah study, is called tefilah, because when we turn to Hashem with our needs, we connect from a place that is really us. Studying Torah ‘merely’ injects Hashem’s wisdom into our head, without connecting our own space and concerns with Hashem. Similarly, when we dedicate our own passions, goals and agendas in service of the Rebbe, we can accomplish more because we are invested and a deeper part of us is connected to the Rebbe.

In the well-known sicha about the tefilah of Chana, the Rebbe explains that when a person asks Hashem for his own needs, the underlying request is to have the wherewithal to serve Hashem. Even if the person is not cognizant of this deeper meaning of his request, it is the true intent of his neshama. Similarly, when a person’s goal in life is to serve Hashem, even when he is working on self-development, the objective is to eventually use one’s more refined self to be of better service to Hashem. It might seem that he is self-absorbed in his own agenda, but it’s all a preparation to be a better shliach in whichever direction life takes him.

We were all brought up on the phrase hamase hu ha’ikar – action is the main thing. Physical mitzvos make a dirah betachtonim and enthusiasm and inspiration are means to enhance the quality of our mitzvos. Since action merely fulfills Hashem’s desire and has no personal involvement of one’s finite intellect and emotions, nothing interferes for it to be a conduit for Hashem’s essence. By contrast intellect and feelings, because of their spiritual nature have an identity of their own, and don’t serve as a transparent medium for Hashem’s essence. This is the conventional way of understanding why action is the main thing, because it draws down Hashem’s essence.

In a landmark sicha the Rebbe turns the whole concept on its head. Hashem’s essence is by definition not limited so just as “no-identity” allows for it to be expressed, so can “identity” or “definition” be a conduit for Atzmus because if you are to say otherwise you are placing a limitation on Atzmus. Therefore, in a certain way kavanah or an individual’s personality expresses Atzmus more than maaseh because it underscores how Atzmus is revealed through a metzius.

The real goal is for a person to harness his or her individuality and personal interests and find ways to use them to further the Rebbe’s objectives.

The Rebbe once requested of R’ Shmuel Levitin to try and influence a member of anash to grow a beard, but not to disclose that the Rebbe was behind it. R’ Shmuel tried, but was unsuccessful. The man claimed the Rebbe saw him all the time and if the Rebbe felt it was important he would say something. R’ Shmuel reported back to the Rebbe what the man said and suggested that the Rebbe should mention something because he is willing to listen. The Rebbe replied, “I have a beard already.” In other words, what’s needed is that the beard should be the chossid’s own, not just a robot doing what he’s told.

Our unique, individual personality also needs to be in service of Hashem.